Published on by Simpleblue 15 Comments Updated on 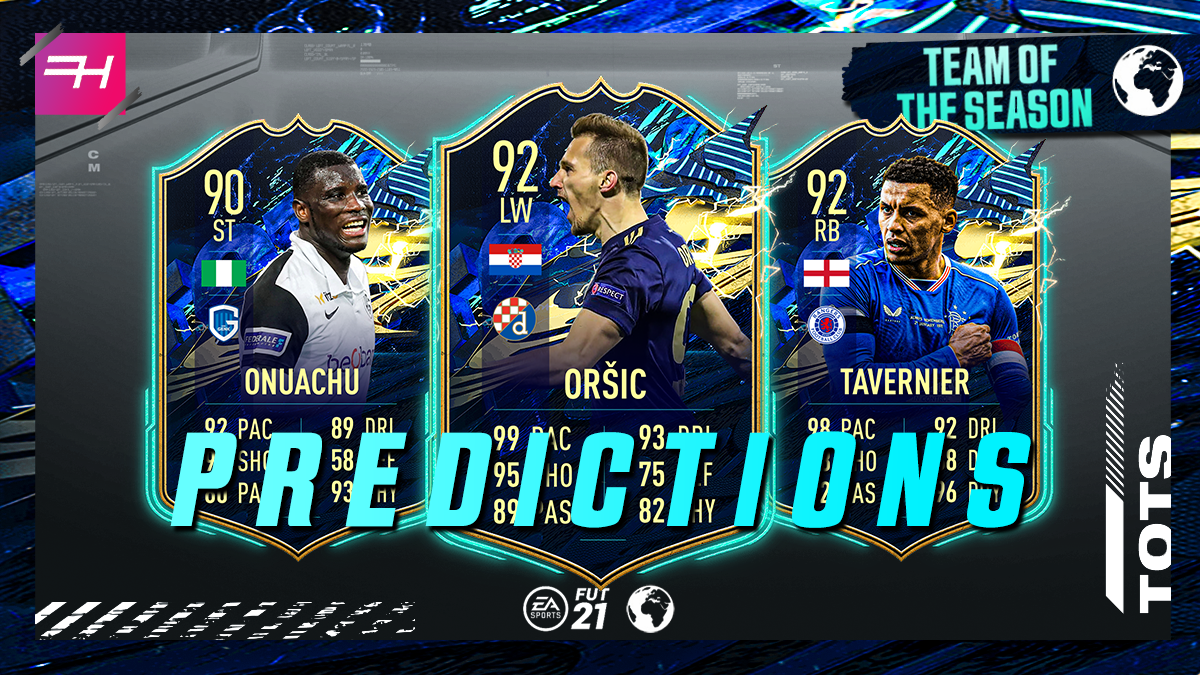 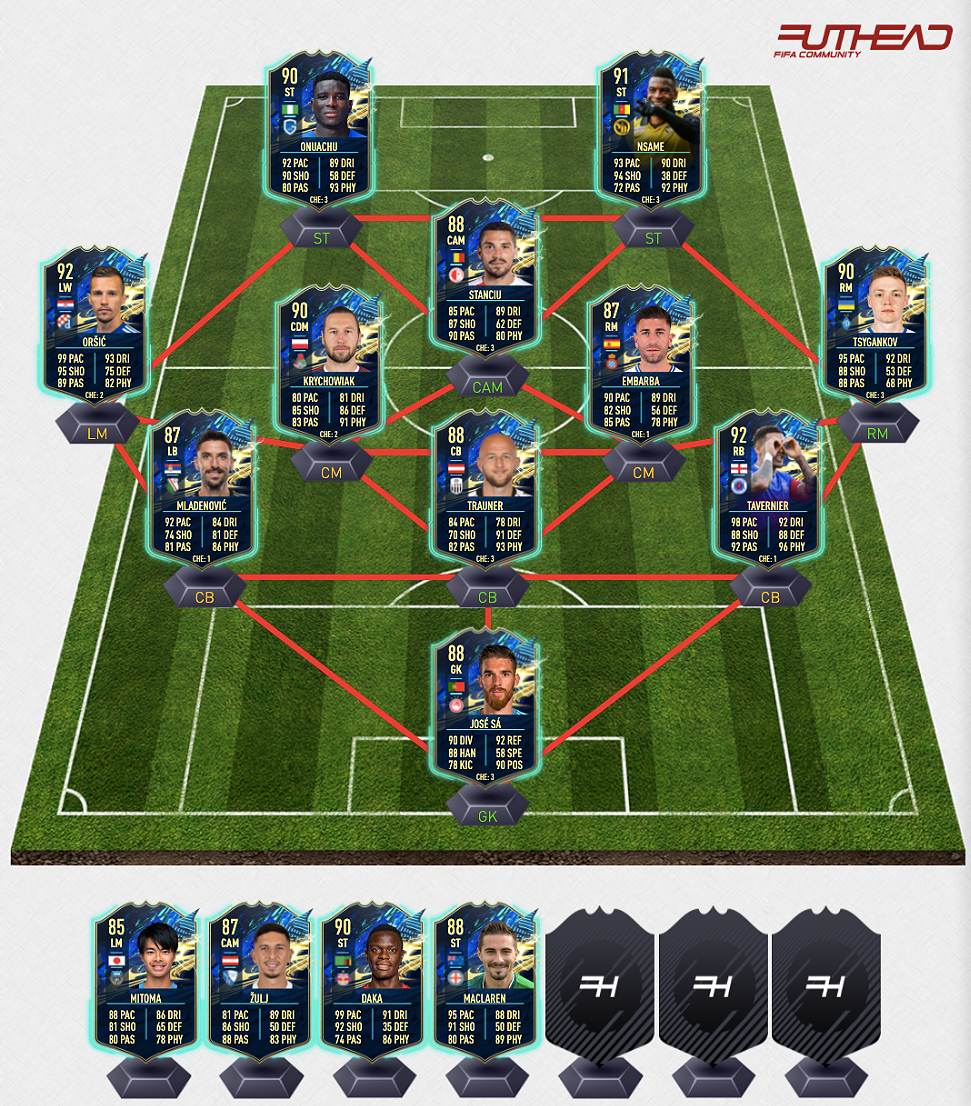 Jose Sa GK – Olympiacos - 82 -> 88 Rated: We're starting my ROTW prediction with Portuguese shot-stopper Jose Sá. Olympiacos won the title with impressive 26 points ahead of PAOK and just 19 goals conceded in 36 games which came down to Sá's performances and on top of that he recorded an impressive 15 clean sheets.

J. Tavernier RB – Rangers - 87 -> 92 Rated: Starting with the first defender in the starting XI and oh gosh, it's a fully deserved one and most likely the new centre-back in many FUT teams. Glasgow Rangers played a superb 2020/21 campaign, topping it with title number 55 for the club and their first in 10 years. They've finished the season unbeaten and with just 13 goals conceded and it's hard to pick out a standout player but one of them is James Tavernier. Finishing his campaign with 12 goals and nine assists, Tavernier also was awarded PFA's Scotland Player of the Year.

G. Trauner CB – LASK - 83 -> 88 Rated: With the amount of strikers available overall from ROTW and less defenders I had to exclude Austria's POTS Daka from the main side but Trauner's inclusion is no less deserved. LASK finished the season on third in the standings and have conceded the second fewest goals with 21 in total. One of the reasons for that was Trauner's defensive performance but he also was dangerous going forward, finishing his personal campaign with four goals and four assists.

F. Mladenovic LB – Legia Warszawa - 71 -> 87 Rated: The last possible defender for ROTW TOTS is another full-back in the name of Filip Mladenovic. Defending champions Legia Warszawa won their 15th overall title and their 5th consecutive one and Mladenovic finished the season with seven goals and five assists and also was awarded Defender of the Year and Player of the Season in the top-flight of Polish football.

G. Krychowiak CDM – Lokomotiv Moskva - 80 -> 90 Rated: A player who should have been included in TOTW at minimum for once but wasn't is Krychowiak. Lokomotiv Moscow finished the season on third place in the standings but with less players available in FUT Krychowiak should be a relatively easy inclusion after he finished his personal campaign with nine goals and three assists which is pretty impressive for a defensive-minded player.

N. Stanciu CAM – Slavia Praha - 81 -> 88 Rated: One of the very few team across Europe who finished their domestic season unbeaten at the top is Czech side Slavia Praha. They not only finished the season unbeaten and won their first title since the 2015/16 campaign, they also won the cup and played a really good Europa League season. One of the player who might find his way into TOTS is Nicolae Stanciu who managed to score 12 goals and was the creative in Sparta's midfield.

Embarba RM – RCD Espanyol - 75 -> 87 Rated: The Catalan derby is back for the 2021/22 season! A year after getting relegated, Espanyol Barcelona confirmed their return to the First Divison of Spanish football. The successful season has seen Espanyol win 24 of their matches, drawing 10 and losing just six so far. Raul de Tomas is their standout player with 23 goals but with the amount of strikers available I'm opting for another standout player. Embarba also played an impressive season so far with 12 goals and 14 assists to his name.

V. Tsygankov RM – Dynamo Kyiv - 83 -> 90 Rated: Another good looking card with super sub vibes could come in the name of Tsygankov. As a leading club of the Soviet Top League, Dynamo Kyiv continues to be one of the 'flagship club', while in the last 10 seasons the league was dominated by Shaktar. This season Kyiv won the league for the first time since 2015/16 and Tsygankov managed to score 12 goals for his side.

M.Orsic LW – Dinamo Zagreb - 86 -> 92 Rated: One of the most overpowered cards from last Fifa could find his way back into ROTW TOTS again. Orsic had his brightest moment this season when he scored his hat-trick against Tottenham but his overall season wasn't as bad too. Not only did Zagreb won the league, Orsic also finished his personal campaign with 16 goals and seven assists.

J..P. Nsame ST – BSC Young Boys - 86 -> 91 Rated: One player who also enjoyed a pretty good season wiith his side is Nsame. Young Boys played an impressive season, finishing the campaign with the title and a gap of 21 points ahead of Basel. Nsame's haul of 19 goals in the league puts him atop the scoring charts and it's speculation about his feature is beginning to pick up.

P. Onuachu ST – Genk - 79 -> 90 Rated: The last player in my starting XI is Onuachu. Despite not winning the league Onuacho enjoyed a fantastic campaign, finishing the season with 33 goals and 5 assists and was also awarded with the footballer of the year award in the top flight.

K. Mitoma LM – Kawasaki Frontale - 64 -> 85 Rated: Starting with options for SBCs/objectives now and it could probably be anyone. One of them who I think could be in is Kawasaki Frontale's midfielder Mitoma who recorded 25 goal contributions last season where his side won the league title.

R. Zulj CAM – VfL Bochum - 71 -> 87 Rated: I somehow definetly expect a Bundesliga 2 player to be featured, either one from Bochum or Fürth and I'm personally going with Bochum's midfielder Zulj. His side finally found their way back into german top-flight, finishing the campaign with the title and Zulj was a important reason for it. With 15 goals and 13 assists, the numbers speak for themselves.