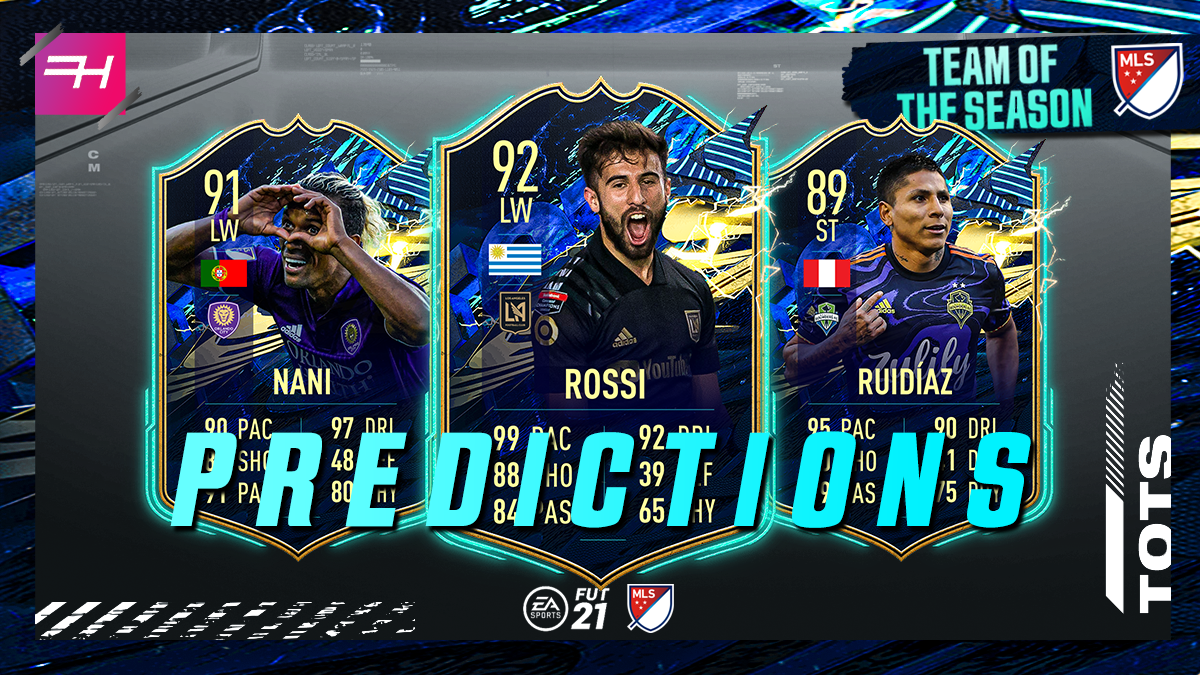 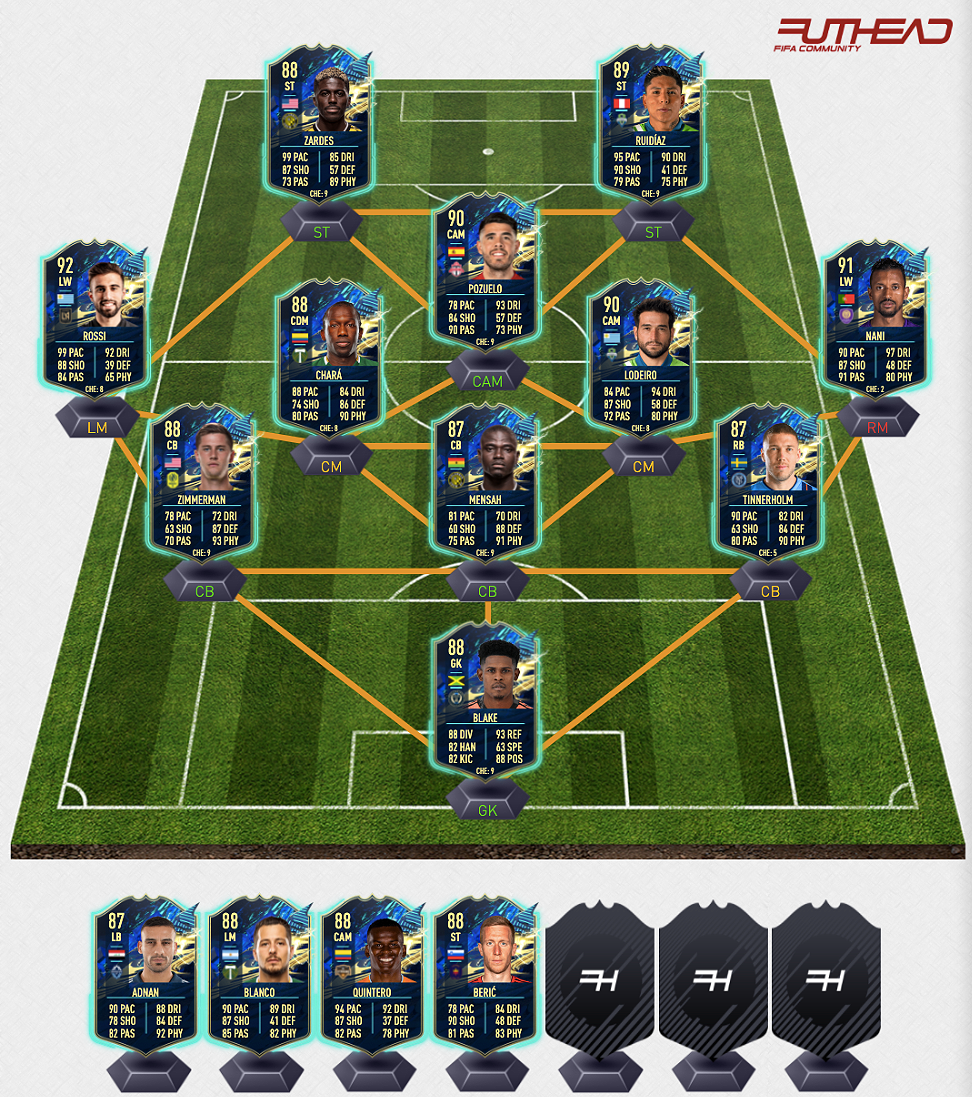 A. Blake GK – Philadelphia Union - 75 -> 88 Rated: It's been a breakthrough year for the Union and a lot of it can be put down to their Jamaican shot stopper Andre Blake. Blake has been in the form of his career in 2020 and was arguably the best performer in the MLS is Back tournament in July. Having kept 8 clean sheets throughout the regular season, he has been one of the best keepers in the competition and won MLS goalkeeper of the Year honors for a second time in leading his side to the best overall record in the league in 2020.

W. Zimmermann CB – Nashville SC - 73 -> 88 Rated: The winner of the MLS Defender of the Year award for 2020, Zimmermann was the heart of the Nashville SC team which became one of seven expansion sides to qualify for the MLS Cup Playoffs. Zimmern scored the first goal in Nashville's MLS history, and was the center of a stout defense that the record for the lowest goals against average ever for a first-year MLS team.

J. Mensah CB – Columbus Crew - 71 -> 87 Rated: An experienced center-back who appeared in two FIFA World Cups with Ghana, Mensa is in his fourth MLS season. He was ever-present for Columbus Crew the last season, a vital cog in a backline which posted nine shutouts in 23 matches, tied for the most in the league, and also was a finalist for the MLS Defender of the Year award.

A. Tinnerholm RB – New York City FC - 72 -> 87 Rated: If there was ever someone who encapsulated the meaning of a juggernaut, it would be NYC's Anton Tinnerholm. The Swedish right-back has been a sensation since moving stateside 2 years ago and he has enjoyed his best season yet thwarting attacks as well as commencing them week in and week out. Having made no less than 4 Team of the Week appearances last season (MLS TOTW not the one in FIFA), Tinnerholm has made himself out to be a star in the making in New York.

D. Chara CDM – Portland Timbers - 75 -> 88 Rated: The first midfielder in my prediction is Portland's Chara. It was a close call between him and Columbus' Nagbe but Chara's inclusion in the 2020 MLS Team of the Season was the reason I've gone with him in the end. The tenacious holding midfielder is already in his 11th MLS season in 2021 and recorded a single-season career-high six assist to go with one goal last year.

N. Lodeiro CAM – Seattle Sounders - 78 -> 90 Rated: The story of Seattle Soundern cannot be written without mentioning Lodeiro such has been his impact since he arrived. Lodeiro was tied for the lead in assists in MLS in 2020 with 10, leadings Sounders FC to a record 12th appearance in the MLS Cup Playoffs in the club's 12th season in the league. In his fifth season in the league, Lodeiro has recorded doubles figures in assists in each of the last four years, one of just six players in MLS history to record double digits in assists in that many consecutive seasons.

A. Pozuelo CAM – Toronto FC - 79 -> 90 Rated: In the past 2 years, few players have been menacing from midfield than Toronto's Pozuelo. He tied for the MLS lead in assists with 10 while finishing tied for eight in the MLS Golden Boot race with nine goals. Pozuelo was ever-present for Toronto last season, starting all 23 games as the club finished second in the overall MSL standings. He also has been named the 2020 Landon Donavan MVP Award winner for the season's most valuable Player.

Nani LW – Orlando City - 80 -> 91 Rated: It is hard to say a player of Nani's experience took his game to another level at MLS is Back tournament, but compared to 2019, that is exactly what he did. The Portuguese winger proved why the Lions spent so much to have him spearhead their attack. His masterpiece occured in the semifinal win over Minnesota, during which he produced a pair of goals. The Portuguese veteran finished the season with nine goals and five assists to his name and should find his way into the TOTS, either in the main XI or via a Flashback SBC.

D. Rossi LW – Los Angeles FC - 75 -> 92 Rated: If there is one name to underline as a future star, then it will most likely be LA FC's explosive striker Diego Rossi. The Uruguayan prodigy has stolen the headlines time after time claiming the league's Golden Boot award with 14 goals in 23 games and also being named Young Player of the Tournament after leading all players with a combined 10 goals and assists. His highlight of the season surely was the win vs LA Galaxy where he was involved in fie goals (four goals, one assist), becoming the first player in MLS history to have played a part in five goals in two seperate games.

G. Zardes ST – Columbus Crew SC - 71 -> 88 Rated: The first of two strikers could be Zardes, you can't argue with facts. He scores goals for fun as long as you provide him service, and he has also shown that he can do it for more than just one season. He essentially guarantees double-digits every season which is not easy to do and exactly did that again last season where he scored 12 goals and helped his side to win the MLS Cup.

R. Ruidiaz ST – Seattle Sounders - 76 -> 89 Rated: One of the top forwards in North America is Ruidiaz who joined the Sounders after dominating Liga MX for two seasons. The diminutive striker has a knack for wreaking havoc on opponents backlines and has been everything the Sounders could have asked for and more. The Peruvian international once again hit double figures in his third MLS season, finishing in a tie for second place in the Golde Boot race with 12 goals and also made it into the 2020 MLS Best XI.

A. Adnan LB – Vancouver Whitecaps - 87 -> 92 Rated: One of the best left-backs the past MLS season was Vancouver's Adnan. The left-footed, who joined as a Designated Players through 2021, is a physically gifted, argressive player who brought balance to Vancouver with his defensive midnset and ability to go forward in attack which resulted in two goals and four assists at the end of the season.

S. Blanco LM – Portland Timbers -76 -> 88 Rated: A player who could have easily been in the MVP conversation had he not been injured is Blanco, he was playing on another level at the MLS is Back Tournament. He was responsible for a goal in every Timbers game except the championship match, finishing the season with four goals and six assists in just 13 games which came down to his ACL injury in September and which is the main reason for me that I can't see him being included in the main XI.

D. Quintero CAM – Houston Dynamo - 75 -> 88 Rated: An experienced attacker with nearly a decade of experience in Liga MX, Quintero was the first Designated Player in Minnesota United history. He's a quick and skillful player and a threat to both score and assist in the final third. He finished the last season with seven goals and 10 assists and could be a candidate to be released via SBC or objectives.

R. Beric ST – Chicago Fire FC - 75 -> 88 Rated: The last player here in my prediction who could possibly pick up a TOTS item via SBC is Chicago's Robert Beric. The Slovenian striker joined from Saint-Etienne back in January 2020, filling the first of three Designated Player openings for the Fire. He had an up-and-down 2020 season that finished on a really strong note. Overall his 12 goals were good for second in Major League Soccer, tied with Gyasi Zardes and Ruidiaz, two behind Golden Boot winner Diego Rossi.