Published on by Simpleblue 43 Comments Updated on 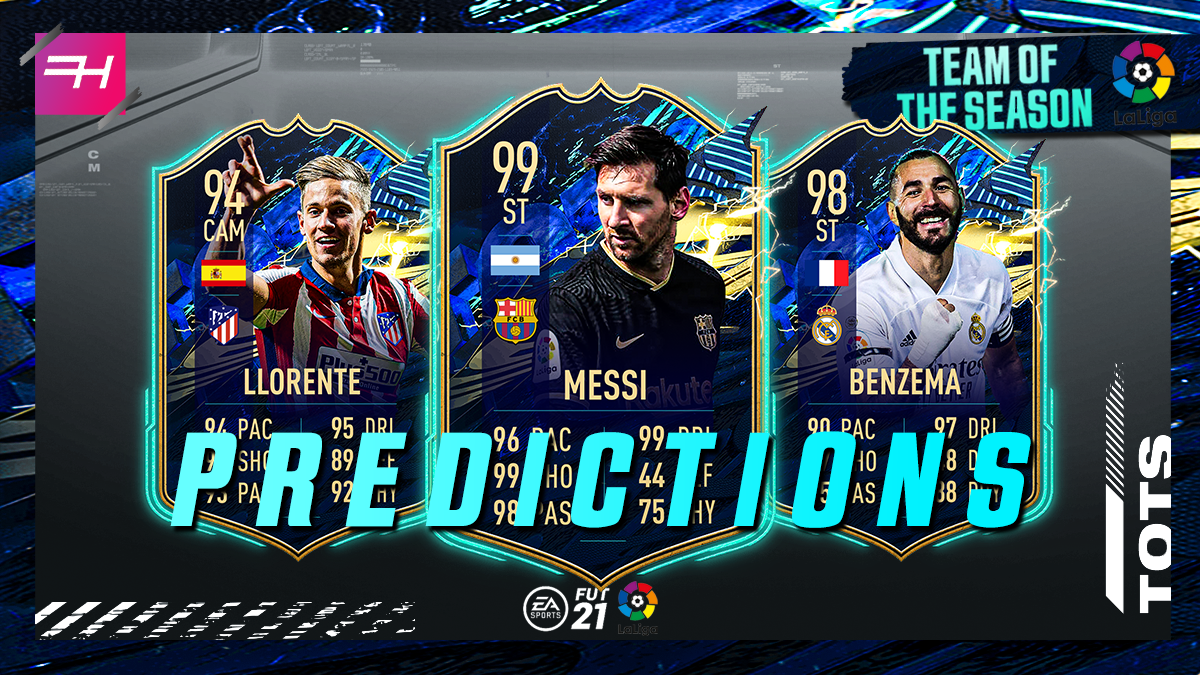 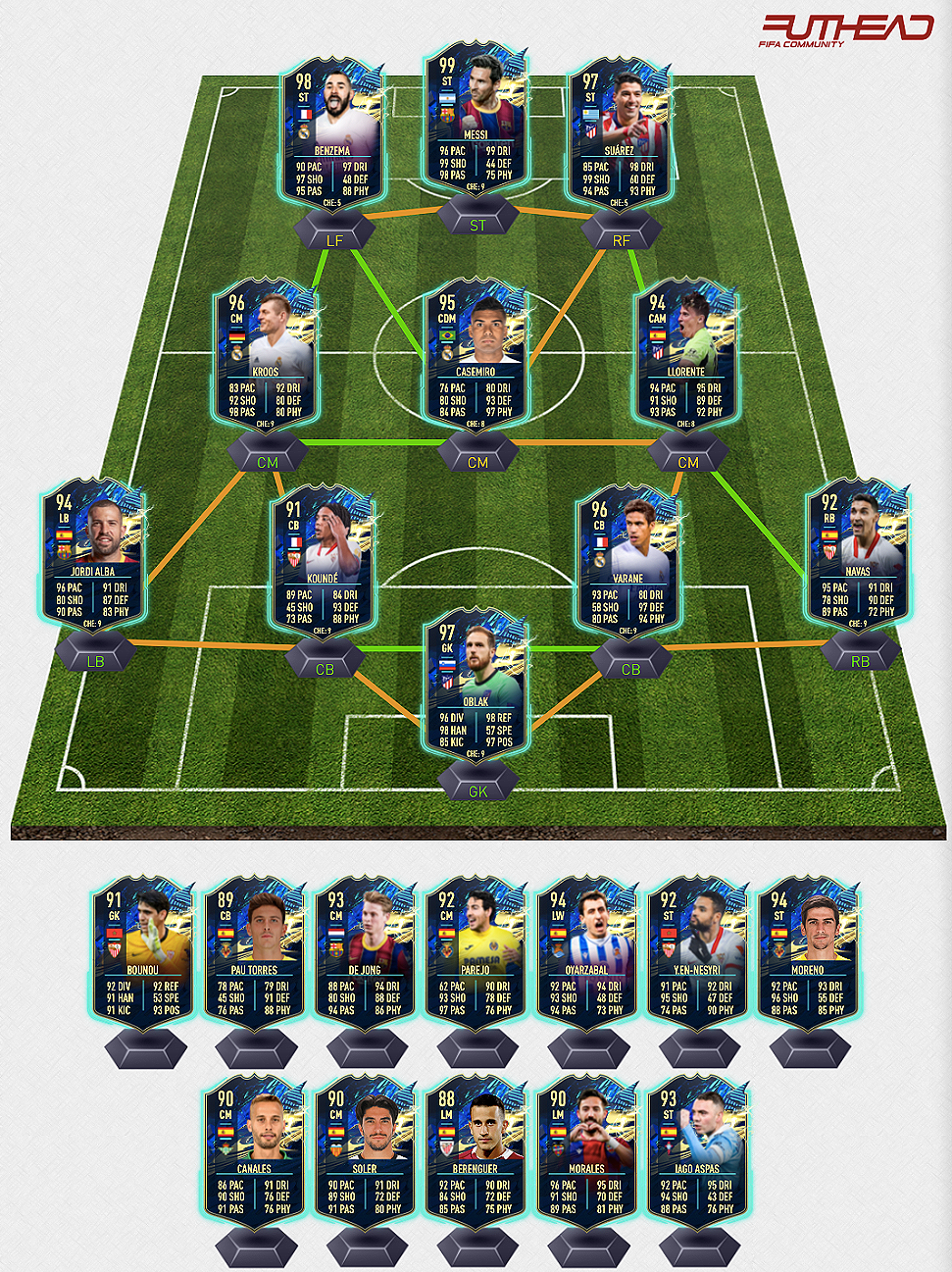 J. Oblak GK – Atletico Madrid - 93 -> 97 Rated: I know a lo of people are now mad about Oblak being the main goalkeeper in my prediction instead of Ter Stegen or Courtois and it's understandable but it's just impossible to not inlcude Oblak. Atleti have always been renowned for their defensive stability under Diego Simeone, and Oblak has been a vital factor for that. The Slovenia international constantly impresses with his reflexes, concentration and composure and is one of the main factors his side only conceded 22 goals in 33 games and kept the most clean sheets so far.

J. Alba LWB – FC Barcelona - 88 -> 94 Rated: One of the finest full-backs in the game, Jordi Alba has been a standout performer for Barcelona for almost a decade, especially this year. The 31-year-old left-back has been one of the shining lights for the Blaugrana in a season where Barcelona had a few underwhelming performances during the campaign. He may have lost some of his pace but continued to be a force to be reckoned along the Barcelona left flank, scoring three goals and assisting another five so far.

R. Varane CB – Real Madrid - 91 -> 96 Rated: There's very little argument to make against the 3-time La Liga, 4-time Champions League and 2018 World Cup winner's inclusion in the side. Varane has been a stalwart in Real's backline since Pepe's departure in 2017. Known for his pace and quick recovery, Varane proves to be the perfect partner for Ramos, who like to occasionally run ahead the pitch for one of his attacking adventures. The centre-back has had more clearances and blocks than his defensive partner and also tallied an impressive 80% success rate in tackles.

J. Koundé CB – FC Sevilla - 84 -> 91 Rated: Hailed as one of the best young defenders in world football, Jules Kounde is Sevilla's most coveted prospect and has delivered a string of eye-catching displays this season. He played a vital role in his club's Europa League triumph last season and caught the eye of several top clubs across Europe. He continued his form this season in the heart of Sevilla defence and is one of the main reason that his side is a serious contender in the title race this season.

J. Navas RB – FC Sevilla - 86 -> 92 Rated: Jesus Navas has led from the front for Sevilla in various competitions impressively, especially in the La Liga, since joining the Andalusian club three summers ago. The 35-year-old former Manchester City player has made a fabulous transition from midfield to right-back and is a key cog in the Sevilla wheel. Navas has been in formidable presence at both ends of the pitch this year, producing crosses upfield for his attacking colleagues and assisted six goals so far.

Casemiro CDM – Real Madrid - 91 -> 95 Rated: Casemiro is one of the major culprits complicit in Real's dominance between 2016 and 2018. Although he moved backwards over the years thanks to his defensive astuteness, he's still not shy away from scoring goals. He has scored 5 times this season and assisted another 3 but more important is that he still has a lot more years left in his pimre, and continues to be a rock for his side.

M. Llorente CAM – Atletico Madrid - 86 -> 93 Rated: Marcos Llorente shares responsibility for the team's succes with Jan Oblak and the defense, as well as game-changing summer signing Luis Suarez. That said, Llorente is a standout player for Atleti this season and has been one of the best in La Liga. His genius movement off the ball and good decision-making on it have lead to 11 goals and 10 assist. That's a contribution any team would love to have in their ranks and his TOTS card should be one of the best cards in the past few years.

T. Kroos CM – Real Madrid - 93 -> 96 Rated: Modric might add a magical touch to Madrid's midfield play but their aura of consistency is derived for his partner Kroos. The German international made a name for himself as one of La Liga's most reliable midfielders and serves as a facilitator for Madrid in the middle of the pitch. With three goals and eight assists to his name this season, Kroos is a much-needed piece in Madrid's battle for the La Liga crown this year.

L. Suarez ST – Atletico Madrid - 90 -> 97 Rated: In one of the worst transfer deals that has happened in football in recent years, Barcelona let go of one of their best ever player for free and handed him to their rivals Atletico Madrid. Since then, Suarez has gone on to become of the current greatest La Liga forwards to absolutely no one's surprise. Since joining Atleti, Suarez has scored 19 goals and provided 2 assists and is one of the main reasons Atleti is still leading the table and battling for the 2020/21 La Liga crown.

K. Benzema ST – Real Madrid - 95 -> 98 Rated: Benzema has been Madrid's best player since Ronaldo's high profile departure to Juventus and reportedly proved his mtttle under Zidane. The Frenchman is one of the most well-rounded strikers in a La Liga and scored several crucial goals for his side. With 21 goals and 7 assists to his name Benzema became a powerful force in Madrid's attacking play.

L. Messi ST – FC Barcelona - 98-> 99 Rated: Yet another center-forward makes it into the side and who else could it be than Messi? He may not have scored in El Clascio but Messi is the reason why Barcelona are even in the title race. La Liga's top scorer can completely dominate matches in a way that nobody else in the league can and his numbers are astonishing with 25 goals and 9 assists.

Y. Bounou GK – FC Sevilla - 84 -> 91 Rated: Sevilla have impressed under the management of Lopetegui and Bono has quietly become one of their key performers. Initially brought in on loan from Girona, the Morocco international acted as a back-up for Vaclik, being utilised in the cup and Europa League ties. This season, the 29-year-old has started in the league for Sevilla and hasn't disappointed. He made a lot of crucial saves and is one of the reasons Sevilla is sitting fourth in the table, just 3 points behind league leader Atletico Madrid.

P. Torres CB – Villareal CF - 78 -> 89 Rated: Pau Torres has been one of the standout players for Villareal this season, as they continued to go from strength to strength under Unai Emery. Torres has shown his elegance on the ball and has also developed a knack for scoring important goals for club and country.

F. De Jong CM – FC Barcelona - 87 -> 93 Rated: After a difficult start to life in La Liga last, Dutch maestro De Jong appears to be growing into his role as long-term successor in Barcelona's midfield. The 23-year old has played more passes than any other player in La Liga this season, and his 92% accuracy rating is proof he's beginning to take up the mantle from Los Blaugrana's greatest-ever midfielders. He's also capable of excelling in a number of roles, wether tasked with dropping deep to dictate tempo alongside Busquets, or support the front line with penetrative passes around the box.

Parejo CM – Villareal CF - 87 -> 92 Rated: Next up is former Valencia midfielder Dani Parejo who joined Villareal last summer. Despite his age he's a well rounded central midfielder, still one of the best in La Liga. He might not have the highest number when it comes to goals and assist with 3 for both but his importance for Villareal is undisputed and Villareal wouldn't be in the conversation for the European spots without him.

Oyarzabal LW – Real Sociedad - 88 -> 93 Rated: The Spanish top flight has always been the ideal competition for technically versatile players and Oyarzabal has made a name for himself in La Liga with his diverse set of skills. He earned a national call-up with his impressive performances this year and his growth has coincided with Sociedad's success in La Liga. He has demonstrated his ability to play across the forward line and he's also dangerous in front of the goal with 10 goals so far and also setted up seven goals for his teammates.

Y. En-Nesyri ST – FC Sevilla - 86 -> 91 Rated: One who has taken everyone by surprise and is competing with the likes of Messi and Benzema is Sevilla's En-Nesyri. He has steadily worked his way through La Liga to one of it's best teams and has become one of the 2020/21 best forwards in the Spanish top flight. He has went on to score 17 goals yet and also picked up a Player of the Month award.

G. Moreno ST – Villareal CF - 87 -> 93 Rated: Another supremely talented Spanish international playing up top and scoring a boatload of goals for his team his Gerard Moreno. He already was a top-performer last season and has been even better in 2020/21. Moreno has scored 20 goals this season, leading the way by contributing to 41 percent of his team's goals. He also has been a reliable source of creation for Villareal with five assists in La Liga.

S. Canales CM – Real Betis - 84 -> 91 Rated: Sergio Canales enjoyed a scintillating end to 2020 and beginning to 2021, and even though his performance level has dropped off a little in recent weeks he's still a reference for Real Betis. With 7 goals and 6 assists so far this season he's undoubtedly one of Betis' most important player.

C. Soler CM – Valencia CF - 84 -> 90 Rated: The Valencia midfielder has stepped up following the departure of Dani Parejo last summer. It was expected that Los Che would suffer after losing Parejo and Coquelin, yet Carlos Soler has moved into a central midfield position this season and hasn't disappointed. So far this season in La Liga, Soler has scored eight goals and provided five assists.

A. Berenguer LM – Athletic Bilbao - 76 -> 88 Rated: Athletic Club made it their priority to bring Alex Berenguer to the club last simmer, eventually coughing up 10.5 million to sign him from Torino, and he's already shown what he can do in his early days with Los Leones. Berenguer's realtionship with Berchiche down Athletic's left-hand side has been a key weapon for them this season which resulted in eight goals and three assist so far for the Spaniard.

J. Morales LM – Levante UD - 84 -> 90 Rated: There are a few fair choices for offensive player from La Liga and due to already having five strikers in my prediction I'm going with another left-midfielder in the name of Morales. Although Levante is still near the relegation-battle with just 9 points ahead of the playoff-spot they should book another year of La Liga football and one of the main reason for it is Morales who scored 10 goals for his side and assisted another 3 so far.

I. Aspas ST – Celta Vigo - 89 -> 93 Rated: With the exception of Barcelona's relationship with Messi, few teams across Europe are as dependant on a single player as Celta Vigo are in Iago Aspas in La Liga. The talismanic forward moved mountains to pull his Galician outfit out of the relegation zone last season and is his side's most valuable player by a country mile. Celta Vigo are currently in ninth place in the La Liga standings and owe much of their success to Aspas who scored 12 goals so far and assisted another 10.

Make sure to check out my Prediction for the Premier League Team of the Season Silver Star Objective Player on Twitter!