Published on by Simpleblue 8 Comments Updated on 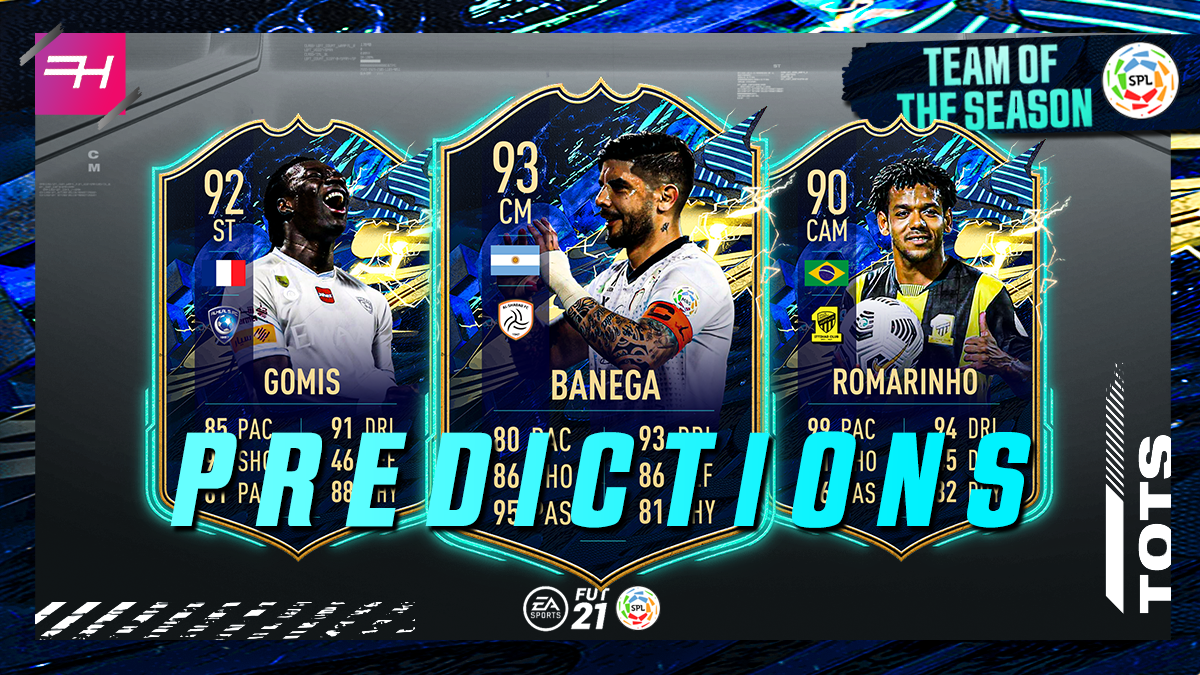 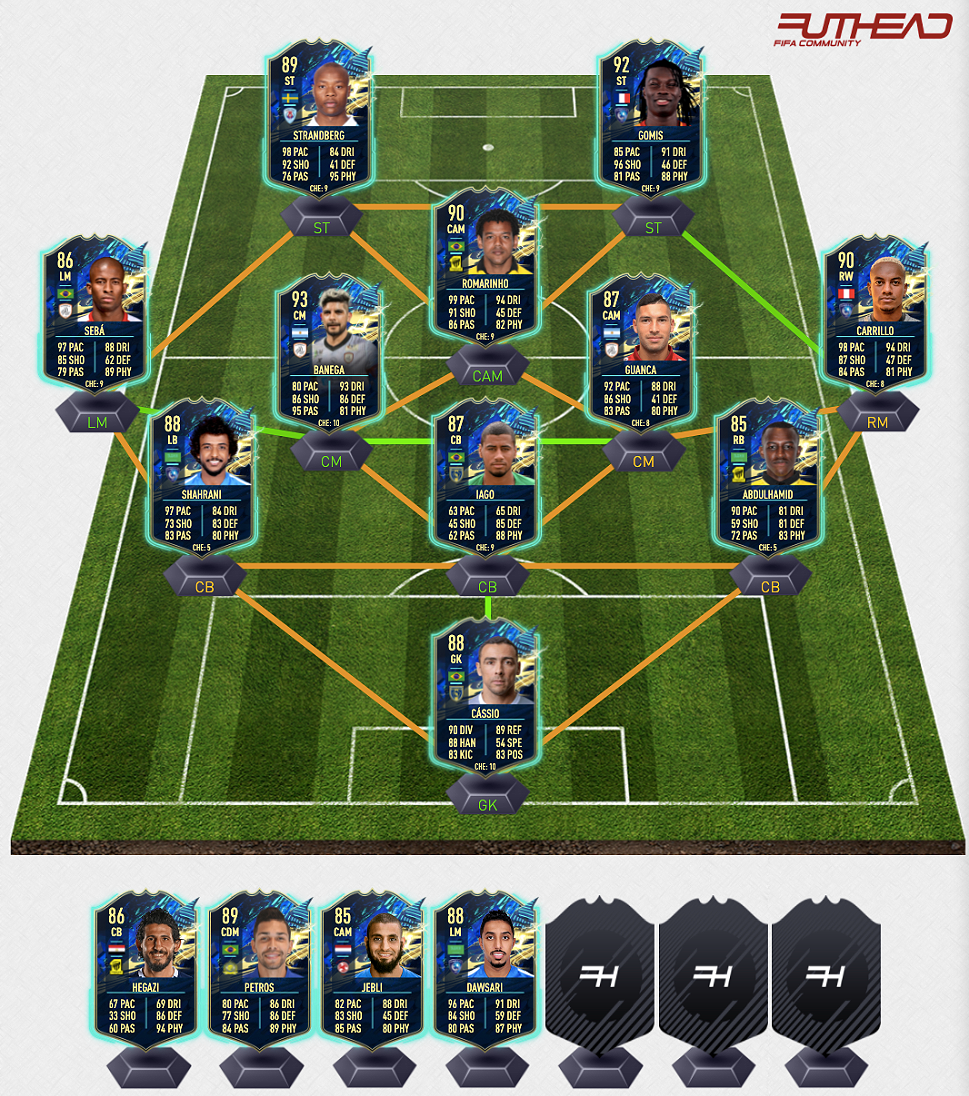 Cassio GK – Al Taawoun - 74 -> 88 Rated: We're starting off the Saudi-League prediction with a keeper who's currently sitting fourth place in the table but despite that his side still kept the most clean sheets so far this season and Cassio is one of the main reasons for it with 0.8 conceded per game.

Abdulhamid RB – Al Ittihad - 64 -> 85 Rated: The first defender in this prediction is coming from Al Ittihad who is currently placed third with just 2 points off of the leaders. The 21-year old right-back is already one of the best fullbacks in the league despite being so young and is also dangerous going forward with one goal and four assists to his name.

Iago CB – Al Taawoun - 71 -> 87 Rated: As I've mentioned earlier, Al Taawoun is currently sitting fourth in the table and kept the most clean sheets so far this season which also came down to Iago's performances when it comes to denying the opponent from scoring. On top of that he managed to find the back of the net four times this season.

Al-Shahrani LB – Al Hilal - 74 -> 88 Rated: The last defender I predict to be in the Starting XI is Al Shahrani from league leaders Al Hilal and this could be a fun card to use with the max possible pace. His side is currently tied on top of the league with Al-Shabab and he's a constant threat on the left flank for Al Hilal when going forward but also is reliable when it comes to defending.

E. Banega CAM – Al Shabab - 86 -> 93 Rated: After ending his Sevilla career with an Europa league title, Banega joined Saudi Arabian side Al Shabab and without any doubt had huge impact and is one of the reason his side is still fighting for the title. That being said, he scored six goals and assisted another eight and despite his age he's consistent with his performances.

Romarinho CAM – Al Ittihad - 83 -> 90 Rated: One of the most fun TOTS cards could come in the name of Romarinho who already got a silver star a few weeks ago. The Brazil forward is by far Al Ittihad's top goal scorer with 15 goals so far this season and they surely wouldn't be fighting for the title without him, a fully deserved TOTS item for him and as I said, it surely would be a fun one.

C. Guanca CAM – Al Shabab - 73 -> 87 Rated: Another really well-rounded TOTS midfielder from Al Shabab could be Guanca. I don't know why he still hasn't picked up a special card yet with 15 goals and four assists this season and I would be shocked if he won't pick up a TOTS card. His 3/3 Skills/WF combination might not be the best but it's surely a card you might wanna try out.

Sebá LW – Al Shabab - 72 -> 86 Rated: The last player from Al Shabab is the Brazil winger Sebá. He might not have as much goals as Guanca but he's still his side's third best scorer this season and he's constantly causing problems for the opponent defenders.

A. Carrillo RW – Al Hilal - 82 -> 90 Rated: Former Benfica winger Andre Carrillo is one of the few players people might remember from earlier Fifa titles and he's about to pick up a really decent TOTS card, probably a new super sub or just a card for fun teams. That being said, he's his side's second best scorer with seven goals and five assists to his name.

C. Strandberg ST – Abha Club - 78 -> 89 Rated: The first of two strikers in this prediction is the Swedish forward Carlos Strandberg who is on loan from Al-Hazem for one season and acutally sitting second in the goals scoring charts. He's probably the main reason his side is six points ahead of the relegation zone in the league with 16 goals and two assists and definetly deserves a TOTS.

B. Gomis ST – Al Hilal - 85-> 92 Rated: A player who undoubtedly will pick up a TOTS is Gomis. The French forward is actually leading the scoring charts with 18 goals and also provided four assist so far, already picked up two informs yet for his performances and although his TOTS might not be the quickest in the game he's surely one for sentimental reasons.

A. Hegazi CB – Al Ittihad - 72 -> 86 Rated: Another defender could come from third placed Al Ittihad in the name of Hegazi. The former West Bromwich player is not the fastest defender in Fifa but despite that he's a rock for his side and an important reason Ittihad is still in the title race with just two points behind league leader Al Hilal.

Petros CDM – Al Nassr -79 -> 89 Rated: A really decent and linkable back to back TOTS could come with the Brazil midfielder Petros. Usually Hamdallah is the player to talk about from Al Nassr and Petros is one who often goes under the radar. He's doing a reliable job for Al Nassr in the defensive midfield and also delivers goals and assist, to be exact he has scored five goals and assisted another two.

El Jebli CAM – Al Faisaly - 70 -> 85 Rated: This an inclusion from a team which is not in the top four in Saudi Arabia and battling against getting relegated but it's still hard to ignore El-Jebli who assisted 9 goals so far this season which is the most in the league.

Al Dawsari LM – Al Hilal - 74 -> 88 Rated: The last player in this prediction once again could come from league leader Al Hilal. It's hard to top Gomis as top goal scorer with him having 18 this season and Dawsari is nowhere near that mark but overall 6 goals and 2 assist from the left offensive side could possibly still be enough for him to pick up a TOTS.