Published on by Simpleblue 108 Comments Updated on 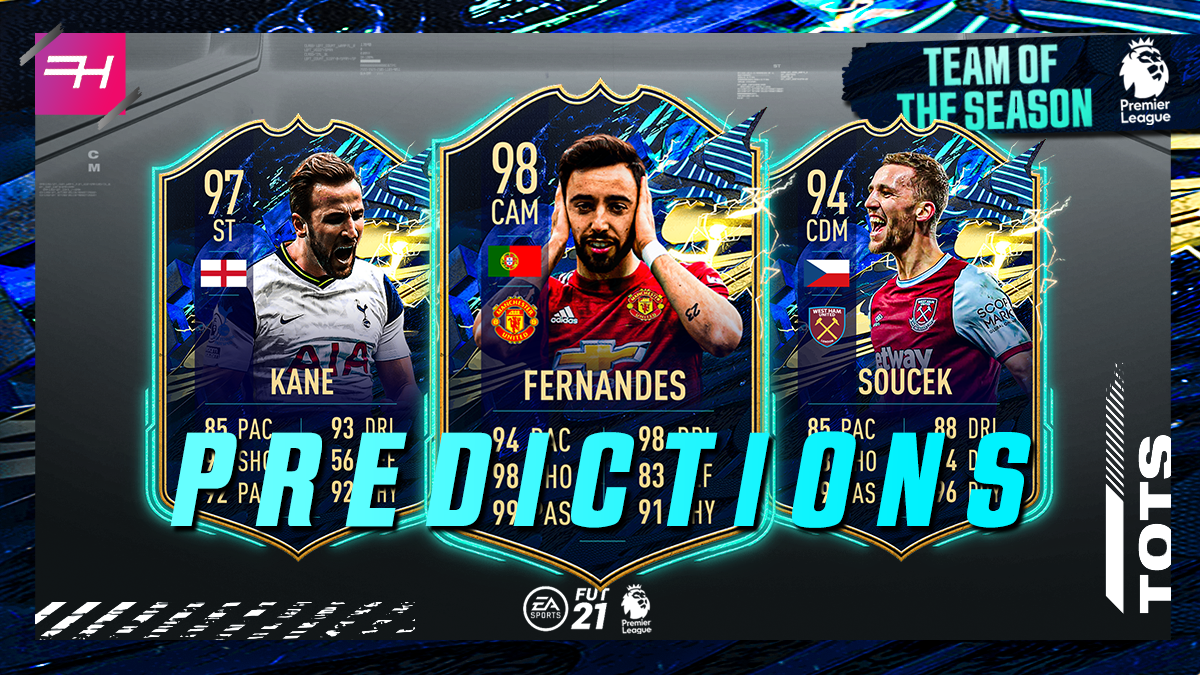 Hello and welcome to my Premier League TOTS prediction! Before you start checking the squad I quickly want to leave a few words here for those who might ask about some players who are not included. As you know, the competition on nearly most positions are really high so I had to make a cut at some point and exclude players like Thiago Silva, Reece James, Kante, Foden and especially Lingard. A few of them are likely to be an Objective or SBC like Thiago Silva (Flashback) or Lingard (Moments Card) so don't be mad if you miss a player you like, it's simply not possible to make everyone happy. That being said, enjoy my prediction and feel free to discuss in the comment section! 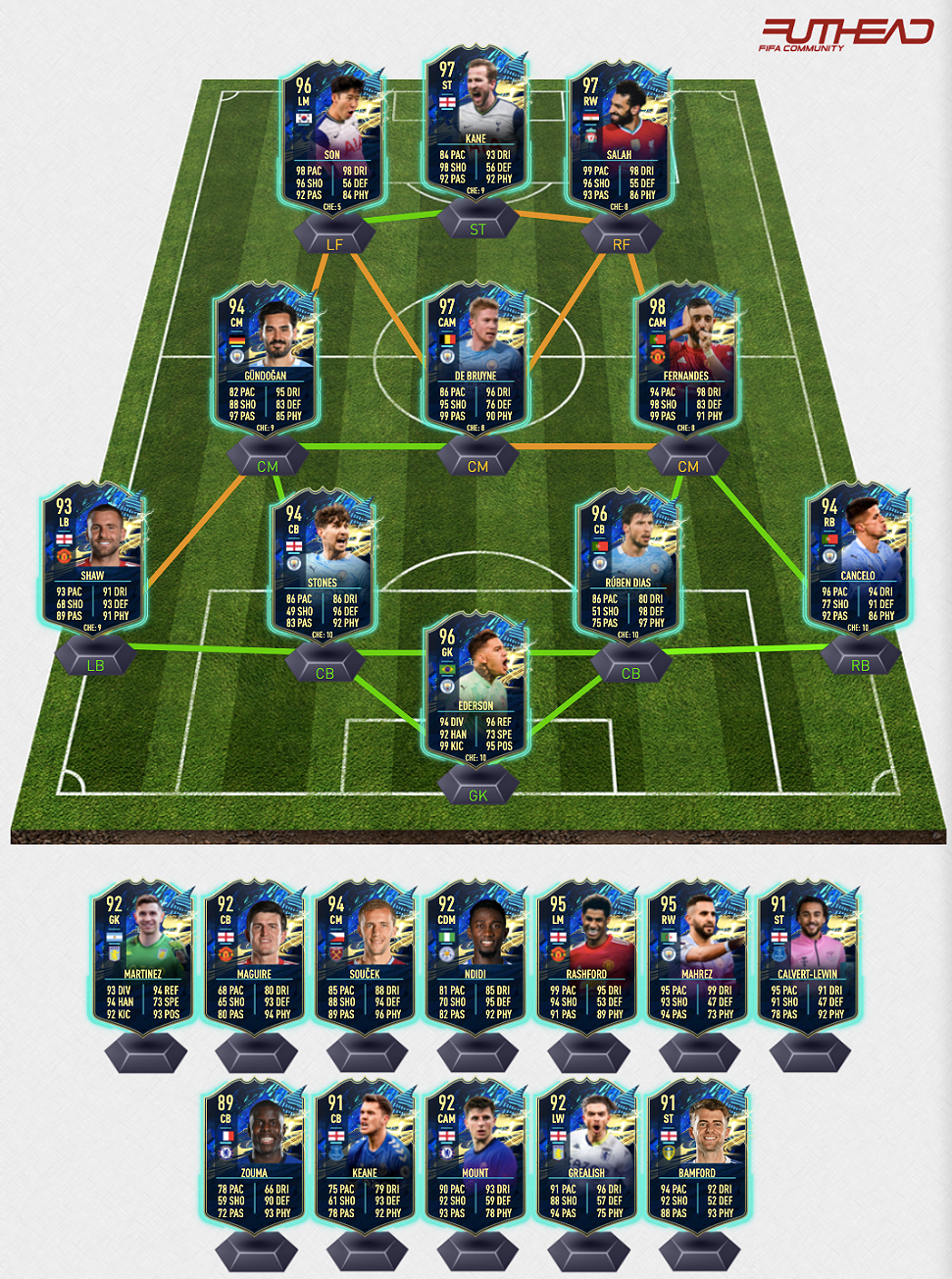 Ederson GK – Manchester City - 89 -> 96 Rated: Speaking about the starting goalkeeper for the Premier League TOTS it's no surprise we're ending up including Ederson. The Brazil shot stopper kept 17 clean sheets this season in the Premier League and only conceded 23 goals in 32 games which is amazing. Surely it's also because of the defense in front of him but he still deserves to be in.

L. Shaw LB – Manchester United - 86 -> 93 Rated: Luke Shaw has been a regular throughout the season for Manchester United, making 25 appearances in the Premier League and undoubtedly the defender has been very consistent across the campaign so far. The English International surely is among the top three left-backs this season, scored one goal and assisted another five for his side and is inevitable when talking about TOTS items.

J. Stones CB – Manchester City - 86 -> 94 Rated: When we are talking about players who are inevitable we're now talking about John Stones. Manchester City have quietly and swiftly fought their way back to the top of the table with a string of good performances and positive results. But way more impressive is that Manchester City kept 17 clean sheets in the Premier League and that also is because of John Stones and his number of top showings and to top that, he also scored 4 goals this season.

R. Dias CB – Manchester City - 88 -> 96 Rated: The second Starting XI center-back also might come from Manchester City in the name of Ruben Dias. Guardiola has been modifying things at the back with the inclusion of Dias and Manchester City surely has the best center-back duo of the season. Following his transfer from Benfica back in the summer, Manchester City have now the best defence in the League this season and Dias is also a strong contender for the Young Player of the Year award.

J. Cancelo RB – Manchester City - 88 -> 94 Rated: Last but not least, the right-back most likely will be a Manchester City player too. Cancelo has been excellent this season for City and has impressed with his performances from full-back that see him regularly move into a defensive midfield position when the Skyblues have possession to link up with his attacking teammates. He's more like an inverted full-back in Guardiola's side and also added one goal and three assists to his tally this season.

I. Gündogan CM – Manchester City - 88 -> 94 Rated: How Ilkay Gündogan haven't got an inform yet but two Player of the Month awards is kind of crazy. He started a bit slow this season with only three goals in his first 15 games for Manchester City but mid december he suddenly found his goals scoring abilities and was scoring for fun in nearly every game. With actually 12 goals and one assist he turned to one of the best midfielders in the league and surely one of the most important players for his side and definetly deserves his TOTS card.

De Bruyne CAM – Manchester City - 93 -> 97 Rated: This is now an inclusion which will cause a lot of discussions. Although Kevin De Bruyne missed a chunk of the season due to a hamstring injury, he has not taken a step back in what he's able to do. The Belgium playmaker played 22 games for his side in which he scored five goals and assisted another 11 but what often went under the radar is his ability to play key passed in the final third which makes him way more important for Man City. For me, he still deserves a TOTS.

B. Fernandes CAM – Manchester United - 92 -> 98 Rated: Probably one of Manchester United's most important, if not the most important signing in the last few years is Bruno Fernandes. Having signed from Sporting last January, the playmaker has been able to establish himself as one of the shining lights in the Premier League and helped Manchester pushing for the title. The 26-year-old has marked 30 appearances in the top-flight so far this campaign with 16 goals and 11 assists and has undoubtetly a huge impact since he joined.

M. Salah RW – Liverpool FC - 94 -> 97 Rated: After last year's Premier League TOTS it's crazy that Salah is the first and probably only player from Liverpool who will pick up a TOTS item this year, at least in the Premier League TOTS. This is due to the fact that Liverpool's campaign have been strongly disappointing so far with a poor run of form since the turn of the year but Salah is one of the few showing relatively constant performances. With 19 goals and three assists he's Liverpool's top-scorer and as I said, probably the only one who makes it into the side this year.

Heung-Min Son LM – Tottenham Hotspur - 89 -> 96 Rated: Despite Tottenham largely falling below expectations this season, Son has enjoyed one of his best seasons in north London, with the South Korean just one goal shy of his best-ever Premier League tally, and one assist shy of his best ever „playmaker“ campaign in the English top-flight (13 goals & nine assists).

H. Kane ST – Tottenham Hotspur - 91-> 98 Rated: Despite the poor season Tottenham have had so far, Harry Kane enjoyed an oustanding campaign with scoring 18 and assisting 13 and is arguably in the conversation regarding the Player of the Year Award which he might end up winning.

E. Martinez GK – Aston Villa - 84 -> 92 Rated: The second goalkeeper was a debate between Mendy and Martinez and I ended up picking Martinez. The former Argentina youth international has faced the sixth-highest number of shots in the Premier League this season yet has an extremely impressive save percentage of 77%, the highest of any goalkeeper to play more than 500 minutes. He also kept a massive 14 clean sheets this season, only Ederson has more. He's certainly pulled his side out of a few holes this year and deserves his TOTS.

H. Maguire CB – Manchester United -85 -> 92 Rated: Manchester United's Maguire has suffered the expectations brought on by his massive price tag but despite playing with less than ideal partner most of the time, the United captain has been quietly excellent this season. He has won the 125 aerials (second among centre-backs) and 79 headed clearances which is also second. He might has had a few crazy moments but I can't ignore him.

T. Soucek CDM – West Ham - 87 -> 94 Rated: West Ham's giant Czech midfielder has been a revelation and a major part of their incredible run in the second half of the season. The Czech Fellaini is preposterously good in the air (with 165 aerial duels won he has more than double the next highest central midfielder) and has scored an impressive nine goals to help guide the Hammers up to fourth and competing for the UCL qualification.

W. Ndidi CDM – Leicester - 87 -> 92 Rated: Wilfred Ndidi hasn't been as fit as Leicester would have liked but every time he's taken the field he's wielded an incredible level of incluence over the way the Foxes have been playing. So often their attacking formations would be overrun were it not for the Nigerian stepping in and cutting off attacks before they develop into problems.

M. Rashford LM – Manchester United - 89 -> 95 Rated: Marcus Rashford is an absolute gem of a player and has been a reliable difference-maker for United this season, racking up an impressive 10 goals and seven assists which, combined with Bruno's devastating output, has consolidated United's position in second.

R. Mahrez RM – Manchester City - 89 -> 95 Rated: This is a pick I wasn't sure about, it was between him and Barnes but in the end I personally think Mahrez will make it and Barnes will probably pick up a SBC card during TOTS. That being said, Mahrez again played a large part in Manchester City's attack with 9 goals and 6 assists so far in the Premier League.

D. Calvert-Lewin ST – Everton FC - 84 -> 91 Rated: After he netted his first senior hat-trick earlier this season, Ancelotti went on to liken his star striker to AC Milan legend Inzaghi. Burdened by that seismic comparison, DCL has handled the weight of expectation with consummate proficiency and continued to find the back of the net at a considerable rate throughout the campaign with a total of 14 goals scored.

K. Zouma CB – Chelsea - 80 -> 89 Rated: One player who probably went a bit under the radar is Chelsea Frenchman Zouma. Despite the rarity of Zouma finding the net, he actually has scored 5 goals this season which makes him the highest-scoring defender in the Premier League for 2020-21 and added to that and what is most important, he managed to keep a high number of clean sheets.

M. Keane CB – Everton FC - 84 -> 91 Rated: Michael Keane has come on leaps and bounds under Carlo Ancelotti and is now leading the Everton defence. An impressive 123 clearances added to his three goals and one assists shows the breadth of his skill-set.

M. Mount CAM – Chelsea - 87 -> 92 Rated: Mount was a golden boy put onto the field to simply add energy as a central midfielder under Lampard. However under Tuchel the young Englishman has been tunred into an attacking midfielder who is absolutely key to the way Chelsea play not because he has energy but because he presses hard, moves well into space and can score if needed to with having six goals and three assists so far.

J. Grealish LM – Aston Villa - 83 -> 92 Rated: The Aston Villa captain has been simply unplayable for most of this season, skinning full-backs without a second thought, gliding infield with a majestic gait and creating chances with an instinctive verve. Regarding the latter, he is currently second for most created behind Fernandes, while he is one of only four players to register at least 10 assists.

P. Bamford ST – Leeds United - 84 -> 91 Rated: The Leeds striker has been one of the division's most profilic and hard-working forwards this season. He is one of the five players to have been directly involved in 20 Premier League goals this term which in numbers are 14 goals and six assists.

Make sure to check out my Prediction for the Premier League Team of the Season Silver Star Objective Player on Twitter!