Published on by Aarong222 3 Comments Updated on 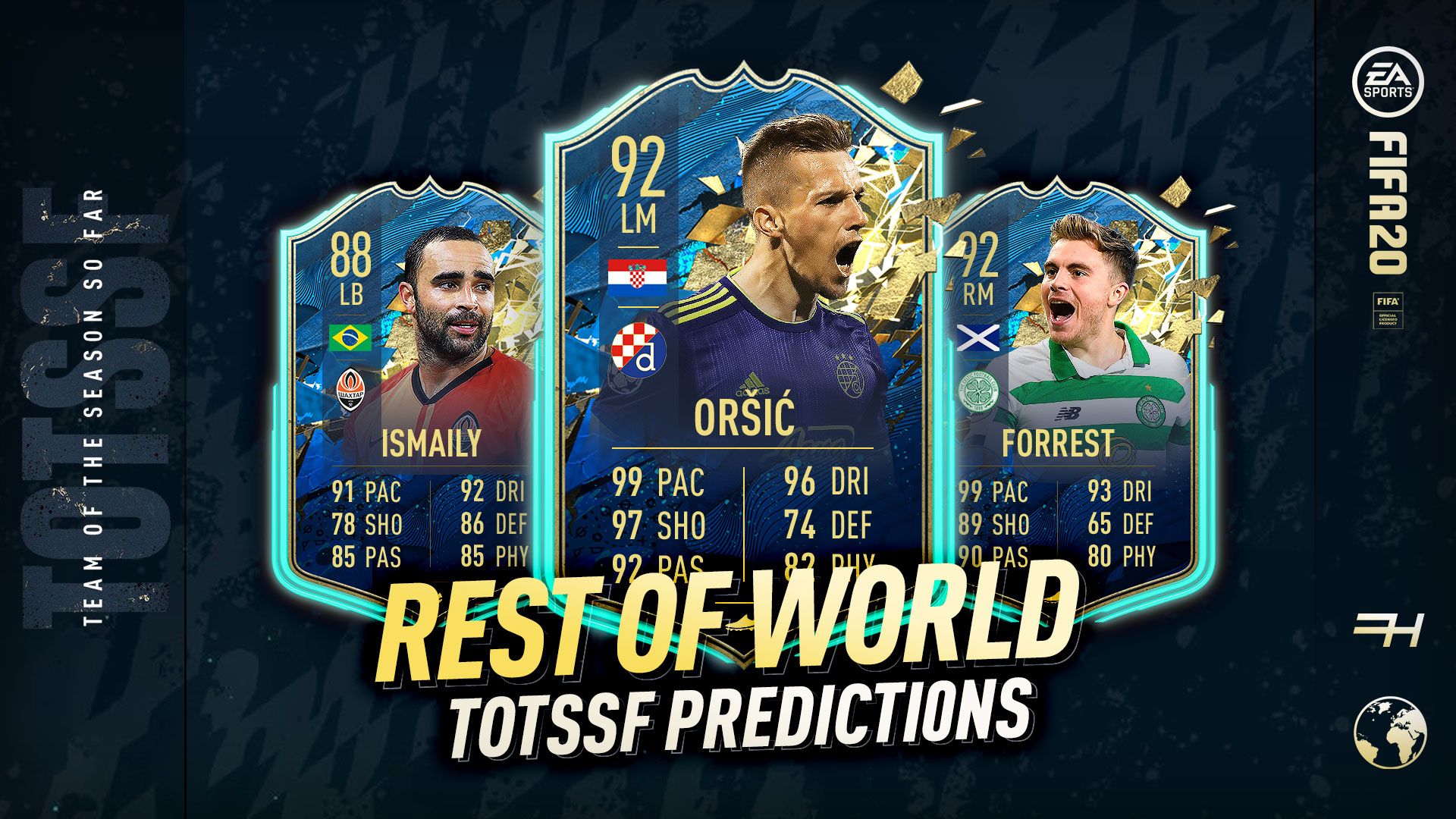 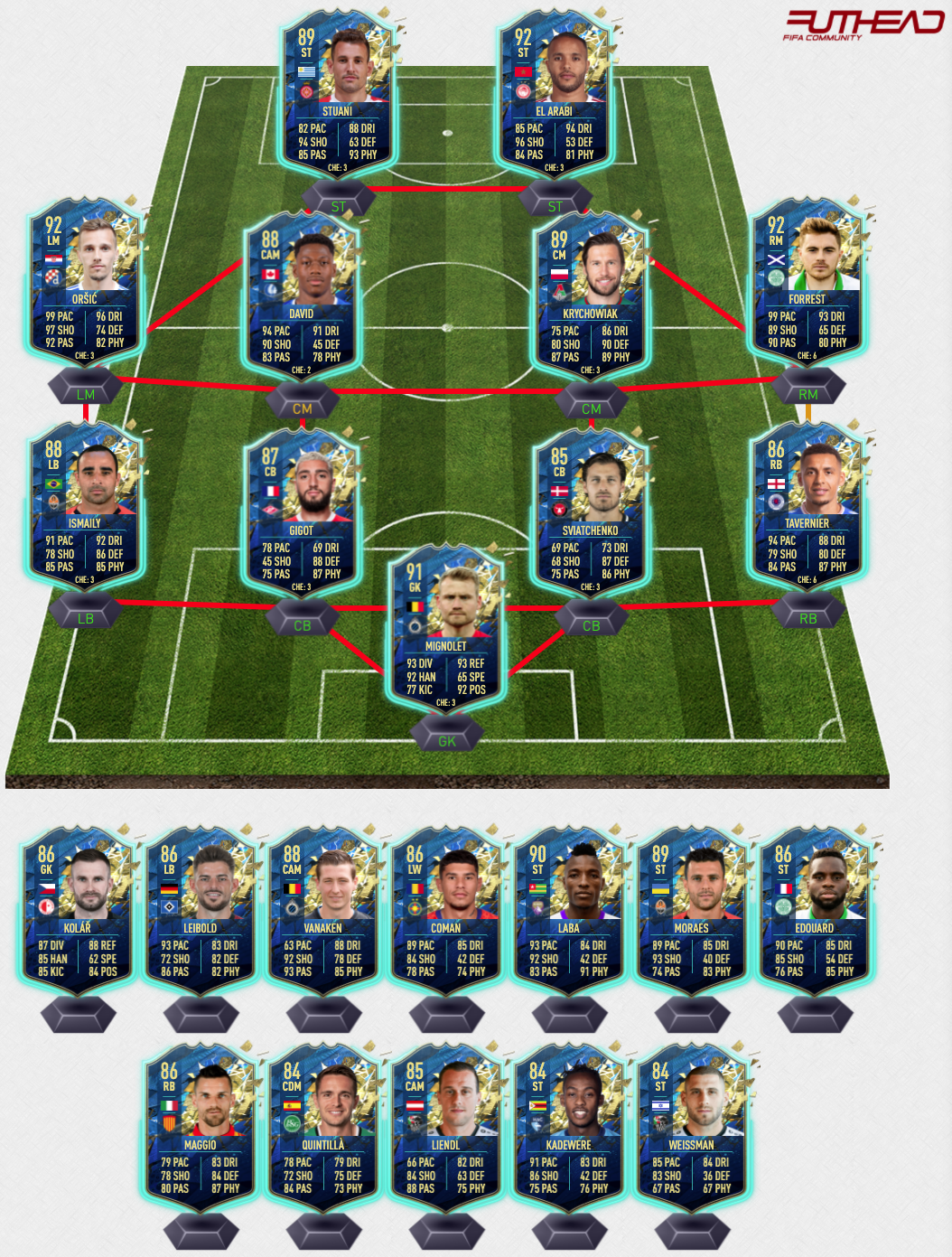 Simon Mignolet - GK - OVR 78 Club Brugge maintained a simply magnificent defensive record this season, conceding only 14 goals in the league with Mignolet playing a large role in that. I fully expect a bigger league for the starting goalkeeper and with such a superb record to his name it seems logical to include Mignolet in this side.

Ismaily - LB - OVR 80 Ismaily is a familiar name when it comes to TOTW predictions which is always a good indication for this side and although he often end up missing out on TOTW due to his league I doubt that the same will occur here. The Brazilian has two goals and five assists to his name from just 19 appearances but thats not what stands out its the fact that Shakthar have only conceded 18 goals in 25 games. With a mixture of both offensive and defensive statistics I feel that Ismaily should make the cut.

Samuel Gigot - CB - OVR 76 Although Spartak Moscow find themselves down in 8th position their defensive side of the game is actually very respectable with just 23 goals conceded in 22 games. Due to this I can see Gigot being included despite playing for a side which has fallen down in the league which for this side is a rarity. Additionally the Frenchman has found the back of the net four times. It's been a strong season for Gigot who has been one of the few positive signs in Spartaks season.

Erik Sviatchenko - CB - OVR 74 Sviatchenko's statistics could easily be misread for that of a wingbacks with an impressive offensive contribution for the Midtjylland CB with three goals and four assists to his name. Midtjylland are nine points clear of rivals Copenhagen

James Tavernier - RB - OVR 75 Although Celtic ran away with the league once again this season in Scotland, Rangers still had an impressive year with 67 points from 29 games. Their defensive record particularly stood out, conceding the same amount of goals as Celtic with just 19. Tavernier looks to be an easy shout for this side after helping towards that defensive record alongside chipping in with three goals and nine assists from RB.

Mislav Orsic- LM - OVR 73 Orsic is already a familiar name for FIFA 20 fans, especially in the early parts of the game. That is after the Croatian picked up two IF's and a headliner item for his performances for Dinamo Zagreb. He has just 19 games under his belt in the 2019/20 campaign but with 12 goals and 5 assists from the wing it is clear to see why EA picked up on Orsic early on in the game.

Grzegorz Krychowiak - CDM - OVR 78 The Russian League is arguably the best division without their own TOTS on FIFA and thus I do expect a couple to feature from the division. Krychowiak has been superb throughout for Lokomotiv, currently sitting in 2nd position just behind league leaders Zenit. In total the Polish midfielder has found the net nine times which for a CDM in 20 matches is a very high total.

Jonathan David - CAM - OVR 74 Another league which can feel hard done by for being snubbed is the Belgian Pro League. Another with a plethora of options available for this side but they have to be narrowed down. Jonathan David is potentially the best option in my eyes with him likely to be viewed as a CAM rather than a ST. The Canadians pace has been a major factor in his success this year and with 18 goals and 8 assists to his name I expect this name to be heard a lot more over the coming years.

James Forrest - RM - OVR 77 There are a lot of Celtic players which could realistically make this side but I had to limit the inclusions and thus the likes of Jullien and Christie have both missed out, which is unfortunate for them but having three SPL and two Celtic players included is already pushing it. Forrest simply has to make the cut though after he managed 10 goals and 17 assists for the Scottish champions

Cristhian Stuani- ST - OVR 79 I'm very surprised that Stuani only managed to pick up one IF this year with the Girona striker scoring practically every week, going to show how much the drop from La Liga harms his chances of an inclusion, despite still being a gold option. Stuani recorded 23 goals in 26 games this season, a tally which impresses in any division. With Girona in 5th position Stuani was the main player providing them with hope of returning to the top division.

Youssef El Arabi- ST - OVR 77 Olympiakos walked their way to the title this season with them being 14 points clear of second placed PAOK. There are a few options for a representative in this side but I just can't look past El Arabi. His name has often been in the mix for my TOTW predictions and with 17 goals and 6 assists to his name he has an impressive record for Olympiakos this year.

Ondrej Kolar - GK - OVR 73 There were a lot of ways this keeper selection could have gone but realistically can you overlook a keeper with just eight goals against him in the league this season? I don't think so and that is exactly what Kolar managed for Slavia Prague this season. He made the shortlist for the community TOTS showing that EA have already noticed him and thus I would be very surprised not to see Kolar in this team.

Tim Leibold - LB - OVR 73 Defenders offensive contributions are often a factor in these sort of sides and although sometimes that is probably the wrong thing to do you can't argue against it when it comes to Leibold. The Hamburg defender has been a constant threat down the left hand flank providing an impressive 14 assists in 29 matches. Hamburg are currently in third position as they look to push for promotion back into the Bundesliga.

Hans Vanaken - CAM - OVR 80 This one was a very difficult call between both Brugge's midfielders with Vormer being the player to unfortunately miss out. There were a few teams with several players being worth of this side and Brugge were one of them. Realistically I can't include them all though. Vanaken just about makes the cut for his 13 goals and 3 assists.

Florinel Coman - LW - OVR 69 You probably haven't heard of the name Florinel Coman before but back in Romania, where he plays his domestic football he is nicknamed Mbappe. There is a good reason for this with the winger putting in superb performances week in week out for his club. In total he has 11 goals and 9 assists in just 23 appearances helping FSCB to 4th spot while leading the goalscoring charts.

Kodjo Fo-Doh-Laba - ST - OVR 73 I actually almost missed Fo-Doh-Laba due to the league he plays in so hopefully EA will notice him as he absolutely deserves to be in this side. The Al Ain striker has an impressive 19 goals and 4 assists from the 18 games he has played this season. With two IF's already to his name I feel that EA will notice him as they have looked at the division when it comes to TOTW. Hopefully they will as he actually looks like a very usable item in FIFA.

Junior Moraes - ST - OVR 78 Shakthar are a side which often feature in these sides and this one is highly likely to be the same with several players having potential to make the side. The best bet is probably Junior Moraes though with the Ukrainian boasting an impressive goalscoring record in the division with 17 goals in 19 matches. On top of that he has also registered seven assists making a total of 24 offensive contributions is 17 matches. A tally which not many are able to beat.

Odsonne Edouard - ST - OVR 74 Now realistically Edouard should have walked into the Community TOTS side but with how the voting system currently is he was snubbed in favour of much less deserving options. That being said he now has another chance to grab his deserved TOTS item. The Frenchman has been the main threat for Celtic this season scoring an impressive 22 goals for them.

Christian Maggio - RB - OVR 74 Those serious FIFA players will remember the SIF Maggio from back in FIFA 11 while he was playing his football for Napoli. A lot has changed since then though and with Maggio near the end of his career now he plays in the second division for Benevento. They have been fantastic this season though and look set to claim the title in Serie B. A lot of this comes down to their defence with only 15 goals being conceded. Maggio has been a big part of that while also contributing offensively with three goals and five assists.

Jordi Quintilla - CDM - OVR 68 There were a couple of CDM options from Switzerland with both Quintilla and Frei standing out. You could argue a case for both but in the end I went for the league position and with St Gallen shocking everyone to lead the division in the title race it only seemed right to opt the way of Quintilla. The Spaniard has managed nine goals and three assists from CDM this season, standing out in the Swiss division.

Michael Liendl - CAM - OVR 71 I debated including Liendl for a while as two players from Wolfsberger seemed unrealistic but when you look at the statistics you simply can't argue against it and with other sides also claiming two spots, although both others are league winners, I opted to include him. Liendl managed 6 goals and 16 assists this season in 23 games, almost managing an offensively contributions per game.

Tino Kadewere - ST - OVR 70 These positions will often come down to goals scored and with Ligue 2 playing more games before suspension than many it gives them the edge in close decisions. With Kadewere managing to hit the back on the net twenty times I find him difficult to exclude from this side despite others perhaps deserving it more and with EA already suggesting the striker for the Community TOTS it seems a logical choice.

Shon Weissman - ST - OVR 65 When it comes to the Austrian division most would just expect another routine Salzburg TOTS item but this season looks set to be different after Weissman has managed to record one of the best goalscoring records in Europe with 23 goals being scored in 22 games. Not many players can boast more than one a game and thus I hope he gets the recognition he deserves.