Published on by Aarong222 12 Comments 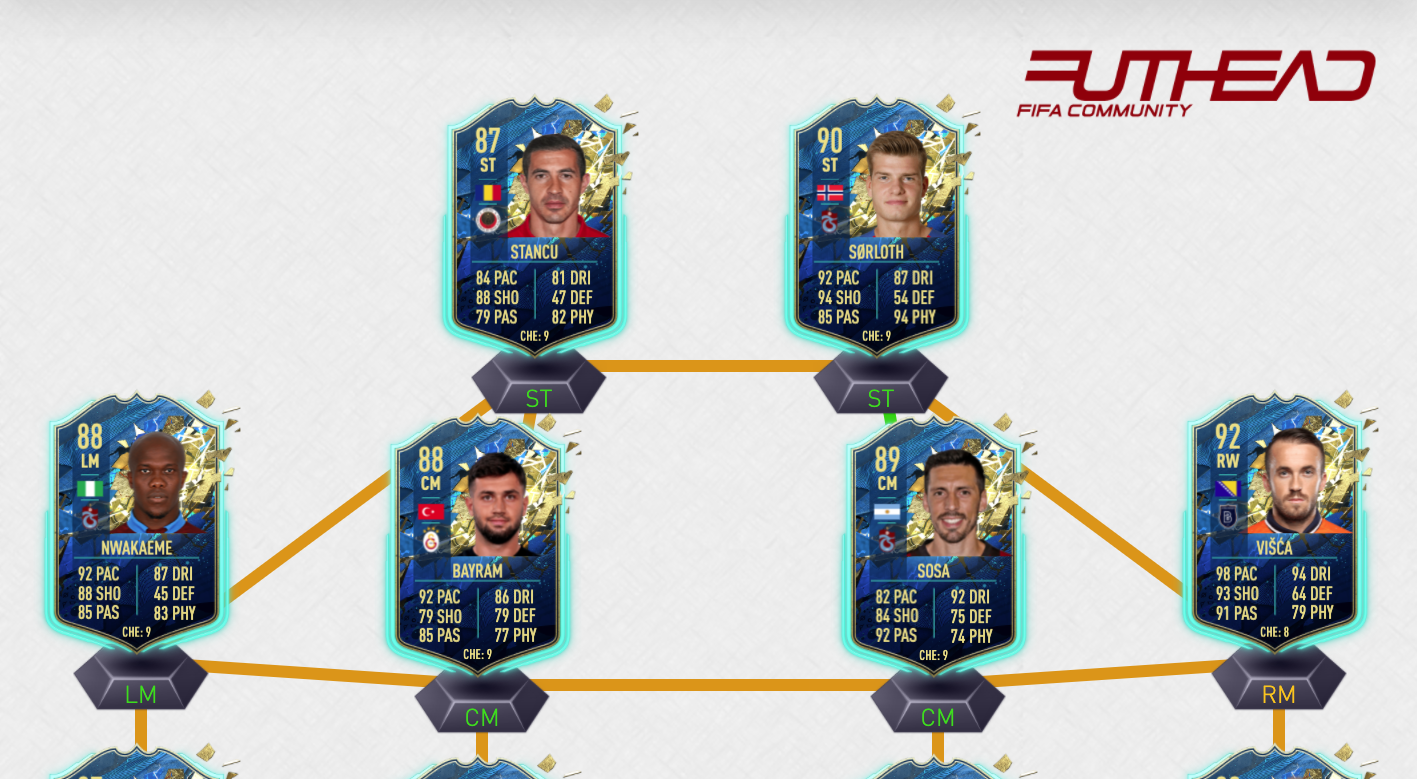 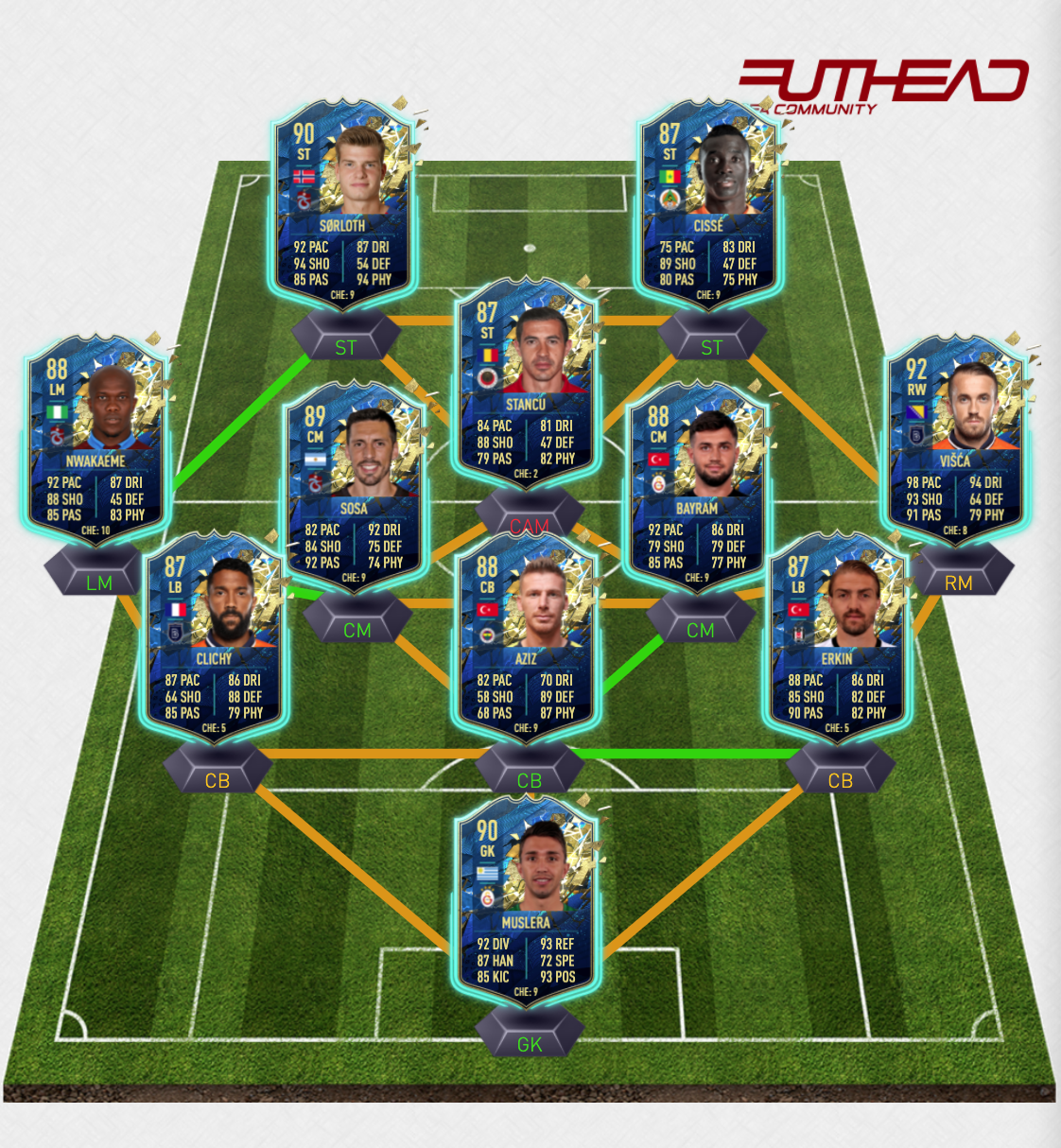 Fernando Muslera - GK - OVR 81 Usually the goalkeepers are one of the hardest spots to predict in these sides, especially with only one making the cut on this specific one. That was not the case with the Super Lig though with Muslera being a stand out option. The Uruguayan has helped Galatasary to a superb defensive record with just 20 goals being conceded during their 26 games, making several world class saves in the progress, significantly helping towards that tally.

Gael Clichy - LB - OVR 77 Clichy was one of a few options for this side which EA had already suggested towards the Community TOTSSF far, with him missing out on that specific squad it makes sense to then include him in this one. It's been a while since Clichy was up there when it came to LB's but the Frenchman still has it in him with a strong showing this season for Basaksehir providing two goals and three assists alongside a defensive record which sees just 25 goals conceded in 26 games.

Serdar Aziz - CB - OVR 77 Aziz made the move from Galatasaray to rivals Fenerbache this season and the latter have struggled to get going, currently in seventh position in the Super Lig. Aziz has been one of the few who have stood out though, along with Kruse who I narrowly excluded from this side. The central defender has recorded four goals this season and with CB's being slim pickings for this position in the side I feel that Aziz will end up getting the spot.

Caner Erkin - LB - OVR 75 With Besiktas currently sitting in fifth position it is unlikely that we will see many feature for them, which is unusual for this side. Erkin is the only player I can see who stands a chance with an impressive assist tally which sees him on eight for the season, with an additional two goals to his name. That being said it is the defensive side of the game of which Besiktas have struggled this season but despite that I can see Erkin's offensive contribution being enough for that to be overlooked.

Edin Visca - RM - OVR 84 It's become a trend that Visca gets to a high FIFA rating by the end of the year and with the Bosnian set to pick up his fourth consecutive TOTS item the same is set to happen once again. Basaksehir are currently joint top with 53 points from their 26 matches. Visca has played a big role in that success with an impressive eight goals and eleven assists to his name, making him one of the easiest selections for this side.

Jose Sosa - CM - OVR 78 After finishing fourth last season Trabzonspor built upon their base and as a result have excelled during the 2019/20 campaign. They currently lead the way on goal difference with eight games to go. Sosa has been superb in the middle of the park, controlling their games and with six goals and six assists to his name he puts his fair share in offensively too. With the Argentine out of contract in the summer he looks set to return to his home nation with Estudiantes but after this seasons display Trabzonspor will definitely miss him.

Omer Bayram - CM - OVR 70 Bayram has operated in numerous positions this season with Galatasaray opting to play his as a CM, LM, LW and a LB during the course of the campaign. It has been during his time in the middle of which Bayram has excelled though. There were options for this position with more goals but Bayram is without a doubt the more deserving option here. He has had the season of his life and should be acknowledged for that.

Anthony Nwakaeme - LM - OVR 76 A large part of Trabzonspors success this season came from their offensive side of the game with a colossal 59 goals being scored in 26 games, nine more than the next best tally. There were a few players that dominated these numbers, one of which was Nwakaeme with ten goals and six assists. The Nigerian only has one international cap to his name but after yet another strong campaign he will be looking to increase that figure, despite being 31 years old.

Alexander Sorloth - ST - OVR 73 With no goal in 16 games for Crystal Palace it is safe to say that life in the Premier League was shocking for Sorloth and after a very mediocre loan spell at Gent his future was looking bleak. That was before he tried his luck in Turkey for Trabzonspor and he hasn't looked back since. With 19 goals and 7 assists to his name this season his performances have seen the likes of Real Madrid and Liverpool seek interest in the striker. Quite the opposite of flopping for Palace.

Papiss Demba Cisse - ST - OVR 75 Onto a familiar face now with one of the loved Newcastle duo of Demba Ba and Papiss Demba Cisse. Both now play their trade in the Turkish Super Lig, although for different clubs. Cisse has been the deadlier of the two when it comes to offensive contribution with the Senegalese striker currently the second highest scorer in the division with 16 goals to his name. Despite the fact that Yilmaz was in EA's Community shortlist, Cisse has to be my selection here.

Bogdan Stanciu - ST - OVR 73 Stanciu unfortunately had his season cut short due to a ruptured crucial ligament but his accomplishments simply shouldn't go ignored here. The Romanian striker scored 12 goals and provided three assists in his 17 played games this season which when you consider that Genclerbirligi have only scored 33 goals this season and sit in 12th position could well have been the difference for them in remaining in the division. For that reason he makes the cut over other forward options.