FH
News
Team of the Season
FUT 19 Serie A TOTS Predictions
Join The Fan Lab, a private research platform where you will be asked to share your opinions on all things Futhead, gaming, and more! Click here to see if you qualify.

Published on by Aarong222 280 Comments Updated on 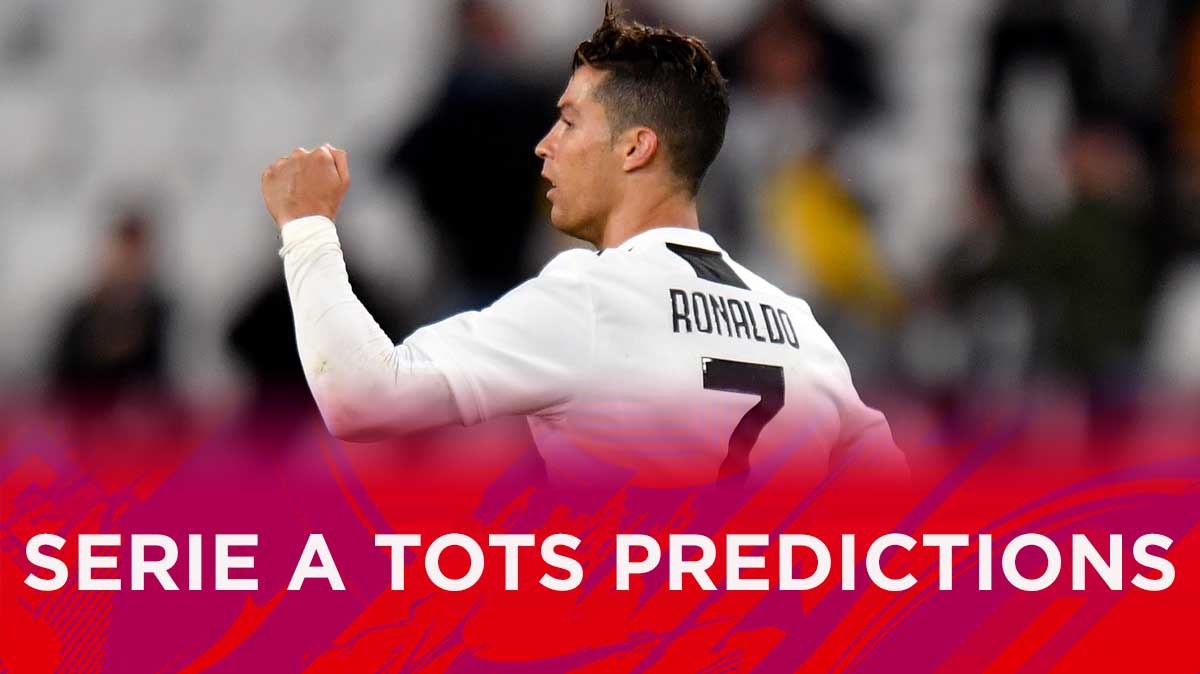 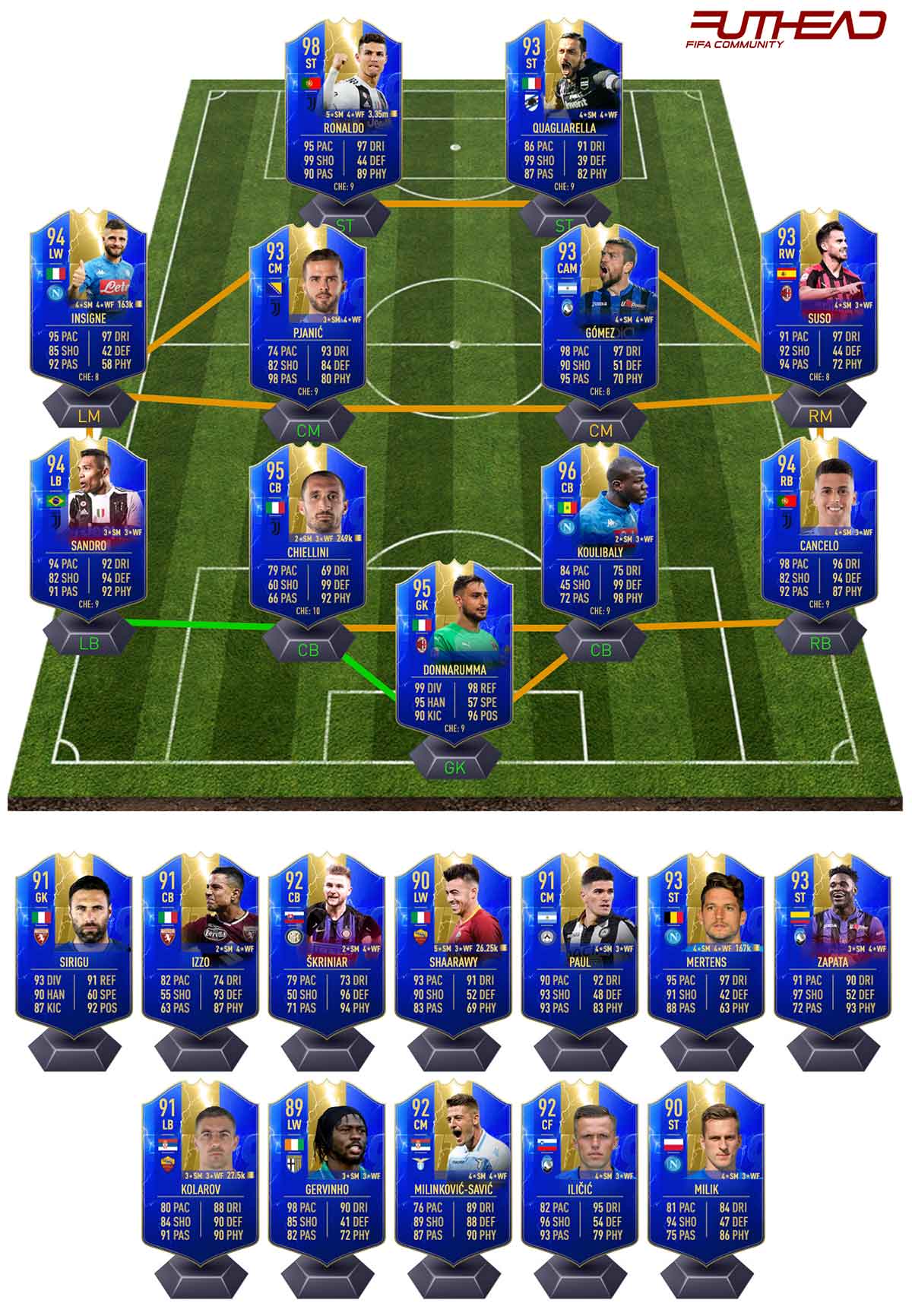 Gianluigi Donnarumma - GK - OVR 83 With the amount of hype surrounding Donnarumma at such a young age many, including myself didn't think he would live up to the expectations, with him being dubbed the next Buffon. So far the Italian has impressed though and once again was one of the best keepers, if not the best in the division this season. With just 34 goals conceded in 37 games played, Donnarumma can help boast one of the best defensive records and when you consider that he has five separate IFs it is also safe to say he played a large role in that.

Alex Sandro - LB - OVR 86 When a side wins a division as comfortably as Juventus have managed you would expect to see a fair few of their players end up making TOTS and this is no exception, starting with Alex Sandro. The Brazilian helped towards Juventus claiming the best defensive record in the division with just 28 goals being conceded in the 37 games they have played. Although offensively there is not much to say about this inclusion I don't think that many will argue against it.

Kalidou Koulibaly - CB - OVR 88 Although controversial I would say that Koulibaly has developed into one of the best CB's in the world right now, with pace and strength to his name he becomes very difficult for attackers to deal with and now for the fourth consecutive FIFA looks set to make his way into TOTS. Koulibaly only has two IFs to his name yet has managed to pick up four IFs which shows just how important he is to Napoli's defence.

Giorgio Chiellini - CB - OVR 90 Chiellini has always been up there when you come to talking about the worlds best CB's and although he narrowly misses out of TOTY time and time again he still impresses at the back for Juventus. To be 89 rated at the start of FIFA and still pick up a Winter Upgrade item takes something special to achieve. He has played a big role in the Juventus back line and is probably the main reason as to why their defensive record is so good

Joao Cancelo - RB - OVR 83 Cancelo started the season off in superb fashion, picking up two IF's in only a few weeks. Obviously, this then slowed down but the Portuguese RB has been consistent for Juventus throughout the season, becoming one of their most crucial players. He picked up a Winter Upgrade which saw him awarded with a +2 and with several IFs also going his way I expect to see him feature in their upcoming TOTS side.

Lorenzo Insigne - LW - OVR 00 Napoli was the only side to even give Juventus any kind of a challenge and even then they still fell over ten points short. When it comes to TOTS there are several Napoli players which look set to feature though and although you could argue the case that Insigne played in an ST role there were signs of both positions throughout the season. With ten goals and five assists, if EA does decide that he played enough in LW for his item to be in that position he will definitely make the side.

Alejandro Gomez - CAM - OVR 80 Gomez is a player I often find on the fringe of my TOTW predictions with Gazzetta regularly awarding him high match ratings for performances with one assist or goal. This is obviously a sign of him doing so much more for the side than direct goals and thus makes his stand out when it comes to selecting the TOTS. With six goals and ten assists, he has a respectable tally but even without being second on the assists Gomez would have walked into my side.

Miralem Pjanic - CM - OVR 86 Pjanic is a player which always seems to find himself in TOTS despite better options being available. Once again I can see that being the case with only two goals and six assists on paper. Juventus will inevitably get the most TOTS items in this side though and apart from the obvious four, it becomes difficult to select the others. Because of that, I feel as though Pjanic will sneak his way in.

Suso - RW - OVR 83 Suso is an interesting one as his first half of the season was significantly better than the second. This was shown with both a Winter Upgrade and a Headliner item being awarded to the Spaniard. Since then he has somewhat disappointed but with seven goals and ten assists to his name, on paper, he still remains one of the best options in midfield.

Cristiano Ronaldo - ST - OVR 94 Ronaldo becomes the first player to receive player of the season in three of the five major leagues with the Serie A award following previous ones from both England and Spain. The Portuguese forward helped Juventus to another title with 21 goals and 8 assists to his name which although is nothing in comparison to his La Liga statistics is still an impressive tally.

Fabio Quagliarella - ST - OVR 82 From an expected inclusion to one that not many would have foreseen at the beggining of the season. Sampdoria's veteran striker, Quagliarella shocked the division with 26 goals to his name, an amount which barring an absurd final day of the season will see him pick up the Golden Boot. Sampdoria is only in a ninth position which shows just how much the 36-year-old has managed for them this year.

Salvatore Sirigu - GK - OVR 82 There have been a lot of keepers that have impressed in Serie A and both Handanovic and Szczesny can potentially feel hard done by on their exclusions from this side but there have been two keepers that have stood out especially for me with the second being Sirigu. The Torino stopper has been considered for TOTW time and time again with several high match ratings going his way. He has been one of the few players that have stuck in my mind for this side and he should walk his way into it.

Milan Skriniar - CB - OVR 86 The fact that Skriniar only makes the bench for this side shows the quality that Italy contains when it comes to defence. The Slovakian has been a rock at the back for Inter throughout the year and EA has noticed this giving him both a Winter Upgrade item and also a Headliner, an item which I feel is a brilliant indication on an upcoming TOTS, especially when it comes to defenders.

Armando Izzo - CB - OVR 76 Although most the defenders in this side come from the big names from big sides, Izzo was once that stood out for many reasons. Torino relied on the defensive side of their game to pick up points and Izzo played a big role in that but not only was he brilliant defensively but he regularly chipped in with offensive contributions, scoring four goals from the back. Gazzetta regularly gave him high match ratings and as a result, we have seen three IFs for the CB.

Rodrigo Javier De Paul - CM - OVR 77 Udinese opted to deploy De Paul in a central role in comparison to his usual LM position this season and it was one which paid off for them. The Argentine has excelled in his new position and has developed into one of their most important players, scoring nine goals and picking up eight assists for them.

Stephen El Shaarawy - LW - OVR 81 When you look at the midfield options El Shaarawy falls within a bunch that can be classed as fringe options, however, when you consider that El Shaarawy has only started 22 games this season in makes his 11 goals and three assists stand out more than those with 34-38 games played. For that reason I have opted to include him over the other options.

Dries Mertens - ST - OVR 87 In comparison to previous years its been a quiet one for Mertens and he is definitely on the fringe of this side but with that being said he is a big name in Italy and with 15 goals and 11 assists its far from a poor season for the Belgian, who leads the assist tally and comes 6th on goals.

Duvan Zapata - ST - OVR 79 This was Zapata's fifth season in the Italian division and previous to the 2018/19 campaign he had managed very little. It has been a completely different story for the Colombian this season though with him sitting in second on the goalscorers list with 22 to his name making him a big part of Atalanta's surprise campaign.

Aleksandar Kolarov - LB - OVR 83 When it comes to goalscoring defenders, Kolarov is one which you can always rely on to chip in with a few goals. He exceeded expectation this year for Roma, managing to score on eight occasions. EA has already awarded him with a Winter Upgrade item and with that amount of goals to his name I feel that he is very difficult to ignore when it comes to TOTS.

Sergej Milinkovic-Savic - CM - OVR 85 This one's a bit of a punt with the Serbian not being close to the level he managed last season, with just five goals and three assists this time around but his all-round game does often stand out and with a clear lack of options in the middle of the park he could just find himself making the side on his reputation alone.

Gervinho - LW - OVR 78 It's been a while since we have seen anything from Gervinho, with the ex-Arsenal and Roma man now finding himself at Parma. The Ivorian managed to find the net on 10 occasions for them this season which for a midtable side is no easy feat. There are a lot of attackers with 15/16 goals but when you take out the strikers Gervinho is actually quite high in the rankings.

Josip Ilicic - CF - OVR 81 When you look at how impressive Atalanta have been this season, it comes as no real surprise that Ilicic has played a crucial role for them. He has impressed in Italy for a few years now and has been given an ST/CF role for most of the season. Scoring a total of 12 goals with 7 assists to go alongside that.

Arkadiusz Milik - ST - OVR 82 The final spot was between Milik and Caputo for me and although just one goal separates the pair the fact Milik has that extra one and thus putting him as the fourth highest goalscorer with 17 means a lot in my eyes. Especially when you consider that he has also picked up a Winter Upgrade item.