Published on by Aarong222 204 Comments 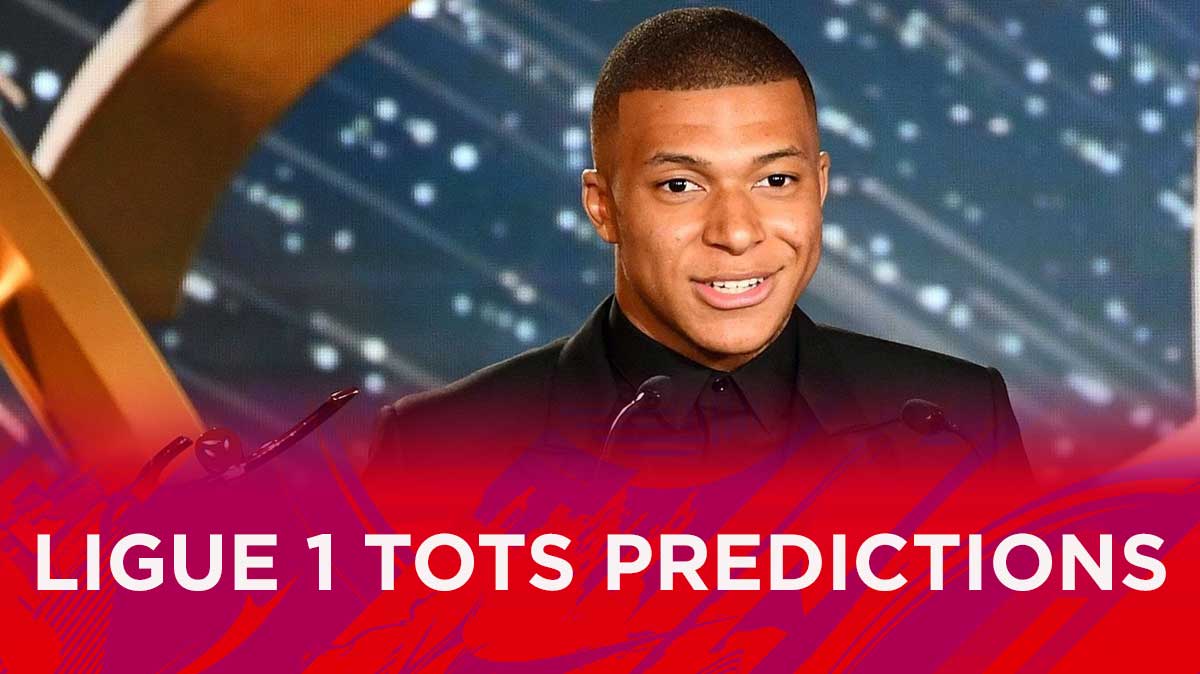 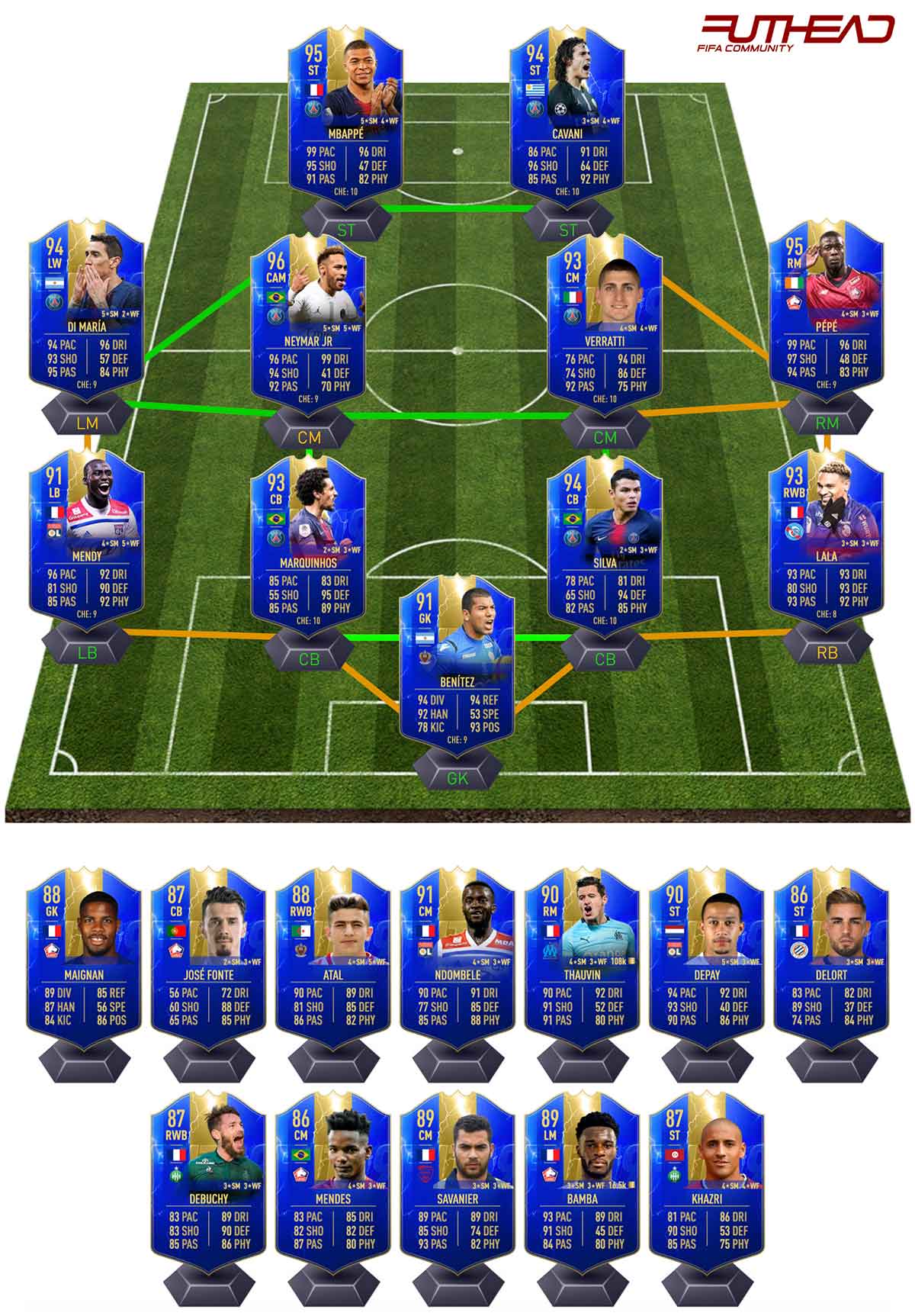 Walter Benitez - GK - OVR 76 There were four keepers strongly in contention for the two -- potentially three goalkeeping spots available -- and whichever ones miss out can feel hard done by. I am confident in the ones I have selected through, with the first being Nice's Benitez. With just the 30 goals allowed this season, Nice have heavily relied on the defensive side of their game to pick up points, and Benitez has played a huge role in that. Regularly picking up high amounts of saves, the Argentine is a regular feature in multiple TOTW predictions. I fully expect him to continue that trend and feature in most if not every TOTS prediction for Ligue 1.

Ferland Mendy - LB - OVR 79 Although Lyon's defensive record was rather average in comparison to some of the higher sides, there was one player who seriously impressed within. Mendy's potential has already been noticed within FIFA, with the French defender picking up a Future Star item, as well as receiving a Winter Upgrade and Community TOTS nomination. His performances were further noticed by the respectable French source of L'Equipe, who included the youngster in their TOTS. I would be very surprised if Mendy fails to make this side.

Marquinhos - CB - OVR 85 We now move towards PSG and as you would expect there are a lot of them in this prediction. Paris walked their way to another title, winning with multiple games to spare and currently sit 16 points ahead of second with just one game remaining. It has been a familiar CB pairing in TOTS in recent years and I expect the same to happen again with the first of the two being Marquinhos, who has been a rock at the back and likely will be for years to come.

Thiago Silva - CB - OVR 88 Although no longer making TOTY squads, at the age of 34, Thiago Silva is still a very capable player, and although we are likely to see less and less of him over the next couple of seasons with PSG bringing through several youth players, as far as the 2018/19 campaign goes, Silva was one of the best defenders in the division. Bringing the experience to PSG's defence, which is the second best in the division.

Kenny Lala - RWB - OVR 78 In contrary to PSG's defensive inclusions we move on to a defender which gets noticed for his offensive side of the game. With five goals and nine assists to his name Lala has managed to pick up four IFs, a Winter Upgrade and a Headliner item in what has been a breakthrough season for the defender, who before this season was a Silver item on FIFA.

Angel Di Maria - LW - OVR 84 It's crazy to think that ADM has actually featured in TOTY, especially when you look at how he played for Manchester United. Since making to move to Paris though, the Argentine has shown exactly what he is made of with several impressive seasons under his belt now. Once again he played a big role in their success, notching up 12 goals and 11 assists from the left flank. With no less than six special items to his name, ADM is looking like a very good FUT Item come to his TOTS.

Marco Verratti - CM - OVR 86 Verratti has been a familiar face when it comes to Ligue 1 TOTS with the Italian making it in four of the last five sides. He now looks set to make that five from six with another brilliant display for the French champions in the middle of the park. Although on paper with just two assists and zero goals Verratti doesn't look like much, he controls the game and does all the dirty work for them. The fact he gets noticed so much shows just how good he actually is.

Neymar - CAM - OVR 92 Neymar only managed to play 17 matches this season which when it comes to TOTS can be classed as a debatable inclusion but seeing as though he made the official Ligue 1 TOTS it would be a stupid move to exclude him on games played, it is Neymar after all. That being said the Brazilian did impress in the games h played in, scoring 15 times and assisted another 7.

Nicolas Pepe - RM - OVR 79 There have been a few surprises stand out players in Ligue 1 this season but none to the same extent as Pepe. The Lille winger has gone from strength to strength without showing any signs of slowing down. In total, the Ivorian has 22 goals to his name, alongside 11 assists. Which when you consider that he has been playing from an RM position is simply ridiculous to comprehend. Had it not have been for Mbappe I am sure that Pepe would have been named POTY.

Kylian Mbappe - ST - OVR 88 There is strong speculation that Mbappe has played his last season for PSG with moves away from the club being rife. It was another spectacular season for the potential future Ballon d'Or winner with 33 goals and 7 assists from the 29 appearances the Frenchman made this season. He has played both on the wing and directly as a striker but with the majority coming from the latter of those two I expect his TOTS to come in the form of a ST.

Edinson Cavani - ST - OVR 89 It's crazy to think that a player of Cavani's calibre can be consistently out-shadowed by the players around him, with Ibra being the man to do so for many years and now both Neymar and Mbappe claiming the limelight away from the Uruguayan. That being said he still does an important job for the French champions, scoring regularly for them. He came third in the golden boot race with 18 to his name so despite PSG having a lot of options I don't expect Cavani to miss out.

Mike Maignan - GK - OVR 75 I was actually surprised not to see Maignan in the Community TOTS voting, which is a big statement coming from EA. Maignan has been outstanding all season for second-placed Lille, who currently hold the best defensive record in the division with just 33 goals being conceded in 38 games played. The stopper made the official Ligue 1 TOTS and I don't think that anyone can debate that.

Jose Fonte - CB - OVR 78 Another player vital to that Lille defence was Fonte, after numerous seasons in the Premier League for midtable sides the Portuguese defender at the age of 34, moved over to France and managed to excel there. Potentially showing the ability gap between the two divisions or was Fonte always a capable player at weaker sides? I'll let you decide on that one.

Youcef Atal - RWB - OVR 75 When you consider that Nice seriously struggled for goals this season, with just the 30 being scored you can see just how important Atal was to them. Not only did he play a large role defensively but he also scored six goals and although three of those came in one game while he was playing LW rather than RWB he has still been important for them at both ends of the field.

Tanguy Ndombele - CM - OVR 80 After the exclusion of multiple Community TOTS players in the first few sides, I began to ignore them for their league TOTS sides. But after the inclusion of ter Stegen in the Spanish edition, I simply can't ignore Ndombele. The Lyon midfielder is widely recognised as a big upcoming talent. He dominated the game from the middle of the park and regularly chipped in with assists, claiming seven in total.

Florian Thauvin - RM - OVR 84 When we look directly at match ratings Thauvin has been harshly marked in comparison to his statistics suggesting that overall he has been rather average for Marseille but that being said can you really ignore an RM with 16 goals and 8 assists this season? I don't think so and for that reason, he ends up in my squad.

Memphis Depay - ST - OVR 84 I was extremely close to snubbing Depay from this side with the Dutch striker being outclassed my many resulting in him being one of the weaker options. It was his assist tally, standing at ten which eventually gave him the edge for me. That and the fact he is still a big name player which should also give him an advantage. Alongside his ten assists, he also managed ten goals which go alongside a winter upgrade he also received.

Andy Delort - ST - OVR 75 When it comes to strikers in Ligue 1 most the options are from those you would have expected to see preseason but Delort is one which has surprised, playing for 6th placed Montpellier, the striker has been crucial for them, scoring 14 goals alongside assisting another seven.

Mathieu Debuchy - RWB - OVR 78 It's safe to say that the inclusion of Debuchy in last years TOTS came as a shock to the community but he has continued his form for St. Etienne, with his offensive threat consistently there down the right-hand side. With St. Etienne managing a fourth-placed finish I do expect to see a couple of IFs from them and none are particularly obvious. As a result, I am taking the punt on Debuchy to make it back to back TOTS inclusions after chipping in with four goals and three assists from the back.

Teji Savanier - CM - OVR 72 Nimes finished in a very respectable 9th place this season with their central midfielder, Savanier, becoming one of the surprise players this season. He managed to pick up an impressive 14 assists, a tally which left him leading that category for the season and also chipped in with six goals. There is no surprise that he was among the highest average L'equipe ratings this season.

Thiago Mendes - CM - OVR 76 Specifically, on the Spanish side, we saw EA opt for those snubbed in the Community TOTS the league TOTS instead. Mendes in my eyes is a fringe player but with that in mind, it pushes him over the edge and into the side for me. The Brazilian was crucial in the middle of the park for Lille and with them finishing second I expect a fair few players to be involved from them, Mendes being one.

Jonathan Bamba - LM - OVR 76 The final Lille player I have opted for in this side is Bamba. The LM has been outshined by Pepe throughout the season but has excelled himself scoring a very respectable 13 goals from LM this season. A tally which has only been beaten by seven players, five of which are strikers.

Wahbi Khaziri - ST - OVR 78 Another Etienne player I am opting to punt is a player who has been crucial for them for the past couple of seasons in Khaziri. The Tunisian has slightly fewer goals than other candidates for this position with 13 but has also played deeper in multiple matches. The Tunisian also has six assists to his name and as mentioned with Debuchy with Etienne finishing in fourth you would expect a couple of TOTS items to go their way.