Published on by Darren8196 122 Comments Updated on 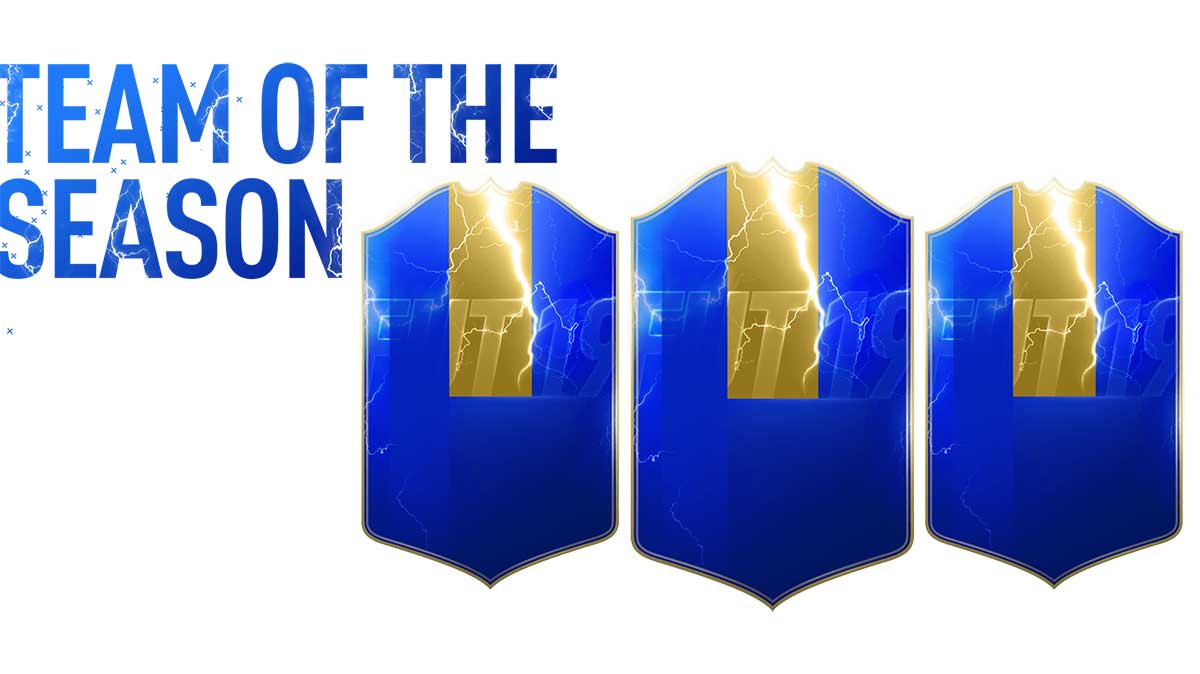 Vote for the 1st FUT 19 TOTS on Futhead!

It's that time of year again as we anticipate the release of Team of the season. Once again, EA have decided to give you the opportunity to vote for who gets in the Community TOTS, based on their shortlist of players who haven’t received an in-form yet this year. Bearing last year in mind, I expect the large majority of players to come from the 5 main leagues, and also for the higher rated players to get the nod ahead of some lower rated but perhaps more deserving, from the old ‘Most Consistent’ format.

Without further ado, let’s get into my selection.

Marc-André ter Stegen - the first spot seems a fairly obvious one, with ter Stegen and Barcelona bossing it both in La Liga and the Champions League. The German has once again proved why he is one of the best keepers in the world right now with some great performances.

Jérôme Roussillon - Wolfsburg's French full back has been on my shortlist for TOTW more times than I can remember for his consistent attacking threat down the left flank. With his 3 goals and 5 assists, he has played a key role in Wolfsburg's season as they break the run of two consecutive relegation playoffs and they push for their return to European football for the first time since 2014/15.

Niklas Süle - Bayern started the season very slowly, while title rivals Dortmund flew out the blocks, but found their groove just before the winter break to start pulling in their deficit as Dortmund struggled for form. With both Boateng and Hummels having very poor seasons by their high standards, Süle has helped keep Bayern's defense somewhat stable, chipping in with a couple of goals at the other end including a key late goal to win 1-0 against Werder Bremen a few weeks ago.

Toby Alderweireld - Spurs have gone over a year without signing any new players, but they are certainly not struggling without it. 3rd place in the Premier League and a semi-final in the Champions League after big wins over Dortmund and Manchester City sees them in a strong position going into next season. Alderweireld has had another great season, with the only thing he is lacking being any goal contributions, but when you have such attacking talents as Kane, Son and Eriksen, that's of little concern to him and Spurs.

Alex Telles - Porto’s left back has been in great form this season, but I can see this also being a FUT-based pick to see him be included. With his RTTF card already having some outstanding stats, and Future Stars Militao also having some insane stats, another big upgrade to Telles will only increase the sight of that pairing in teams. Porto look set to miss out on back-to-back league titles, but their season has been far from a failure, with Telles being one of their key players.

Yannick Carrasco - The first of two CSL player who could feature is Belgian winger Carrasco, who has helped Dalian Yifang to a comfortable mid-table finish in their first season back in the top flight. 11 goals and 10 assists across his 31 appearances is a solid return which, along with a potentially great TOTS, should see him make the side.

Thiago Alcântara - A second Bayern player to make the cut is Thiago. He has the best Kicker rating of all Bayern players this season and the 7th best of all outfield players, with his 2 goals and 6 assists. He has played a key part of Bayern’s pulling in of Dortmund with his performances picking up after the winter break, and it is no surprise that his good form has coincided with Bayern’s excellent run of results.

Sergio Busquets - Barcelona look like they have cruised to another La Liga title and Champions League semi-final, holding a 3-0 lead over Liverpool after their first leg tie. In his usual holding midfield role, he has brought experience to a much younger Barcelona team than in the past few years - the first time this millenium that they have started a season without Xavi or Iniesta.

Allan - With one of the highest average Gazzetta ratings for midfielders, Allan has helped Napoli keep themselves established as Italy’s second best team behind Juventus. Like Busquets, he doesn’t have many attacking contributions, but his defensive shifts have been excellent throughout the season.

Sébastien Haller - Frankfurt's attacking force has been well noted this year, with Jovic in particular shining. However his French striker partner Haller has also been excellent, with double figures for both goals and assists helping carry his side to the EL semifinals and keeping hold of 4th place in the Bundesliga ahead of a very competitive group of teams just behind them.

Zlatan Ibrahimović - the man who recently claimed “I am the MLS” has well and truly taken over the league, averaging a goal contributing every 73 minutes he has played so far in the league. No doubt he will pick up some In Form's over summer, but his inclusion on this shortlist makes him a certainty to get in.

Roman Bürki - Dortmund form after the winter has been a complete shadow of their form in the first half of the season. However one of the only players who has been on top form all season has been the Swiss keeper. He tops the Kicker rating charts with an excellent 2.55 rating which shows just how good he has been this year.

Łukasz Fabiański - West Ham could very easily have found themselves in a relegation battle if it wasn’t for Fabianski and Felipe Anderson. The latter has received 3 IF’s for his efforts, while the Polish international has gone relatively unnoticed in FUT terms. He may only have 6 clean sheets all season, but a league-high 140 saves shows just how crucial he has been to the Hammers, helping them to a very respectable mid-table position.

John Stones - Although he has recently lost favour in the City defence due to the return of Kompany, Stones played a key role in getting City off on the right foot at the start of the season. The reigning champions conceding just twice in his first 7 appearances of the season. City’s rotation will see him miss out on the EPL TOTS, but I can see him being included here as a very solid English and EPL CB that people will want to use over the likes of Fonte who will very likely be included in the Ligue 1 TOTS for his excellent season for Lille.

Aaron Wan-Bissaka - the young English full back has been a revelation this year, making the RB spot his own in the Palace back line. His performances have attracted much acclaim and attention, having made his England U21 debut this year, and has been linked with a big money move away to one of the top EPL teams.

Jesus Navas - Having moved to a more defensive role than he played in his earlier career, Navas has helped Sevilla push for the final Champions League spot behind the usual big 3, with the fight seeming to be going down to the wire between them and surprise package Getafe. Navas’s wingplay has allowed the likes of Sarabia and Ben Yedder to flourish, while still chipping in with the occasional goal or assist going forward as well.

Rodri - Atletico Madrid have gone relatively unchallenged to second place in La Liga this season, with Barcelona 9 points ahead and Real 9 points behind. Rodri has come in and taken over the gap left behind by the departures of veterans Gabi and Tiago, making himself one of the most coveted defensive midfielders in the world as many teams seem to be on the market for someone just like him.

Emre Can - Juventus have taken the Serie A by storm this year, with the addition of Ronaldo to their already strong attacking threat proving too much for everyone else. However another summer signing has gone fairly under the radar with his solid performances. Can has established himself as a regular starter in Juve’s talent-laden midfield after his free transfer from Liverpool, missing only 2 games in all competition when he has been fit.

James Maddison - Leicester have been battling in the ‘best of the rest’ behind the top 6 again, with a lot of that down to their three front men - Vardy, Tielemans and Maddison. With Vardy having already picked up 2 IF’s, and Tielemans not making any real impact at Monaco before his winter loan move to the Foxes, we see Maddison get on the shortlist for TOTS. Only 7 goals and 7 assists may not be too impressive, but his overall performances have been excellent throughout the season, so should be an easy inclusion in the side.

Steven Bergwijn - Ajax have drawn much acclaim and attention this year due to their excellent Champions League run, but domestically they are still tied on points at the top with PSV. A large part of PSV’s success has been due to their front trio of Lozano, de Jong and Bergwijn, who boast an insane 59 goals and 25 assists between them in the Eredivisie. At just 21 years old, Bergwijn clearly has a bright future ahead of him, and is the only one of the trio to reach double figures for both goals and assists, with those coming equally as often from the left and right side, showing his excellent versatility.

Francesco Caputo - Empoli face an almost impossible task of escaping relegation with 4 games left and a much harder set of games compared to Udinese above them. They only really have a chance of getting out thanks to the goals of striker Caputo, whose 15 goals have carried them away from the bottom of the table. With so few Serie A options along with a very good potential card, Caputo seems like a safe bet to get in.

Mbaye Diagne - How Diagne hasn’t got an IF this year is simply a mystery. 28 goals and 3 assists in 26 appearances for both Kasimpasa and Galatasaray see him top the goalscoring charts with almost double that of the second best striker this year Yilmaz, who also makes the shortlist.

So those are the 23 players who I think will be voted into the team. Make sure you have your say by voting, and also check out who Aaron has selected in his prediction.