Published on by Aarong222 429 Comments Updated on 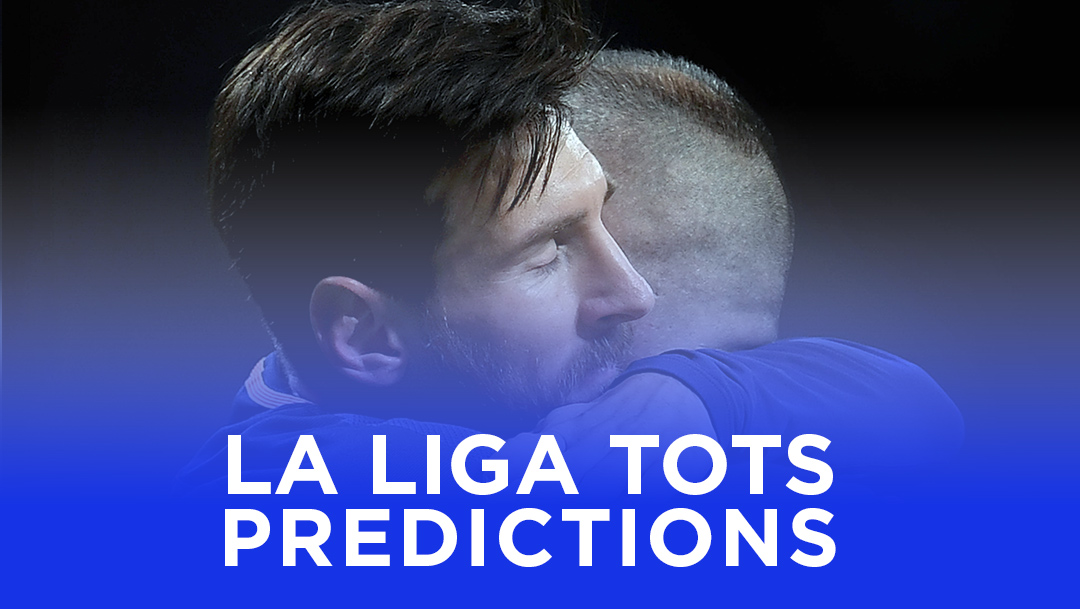 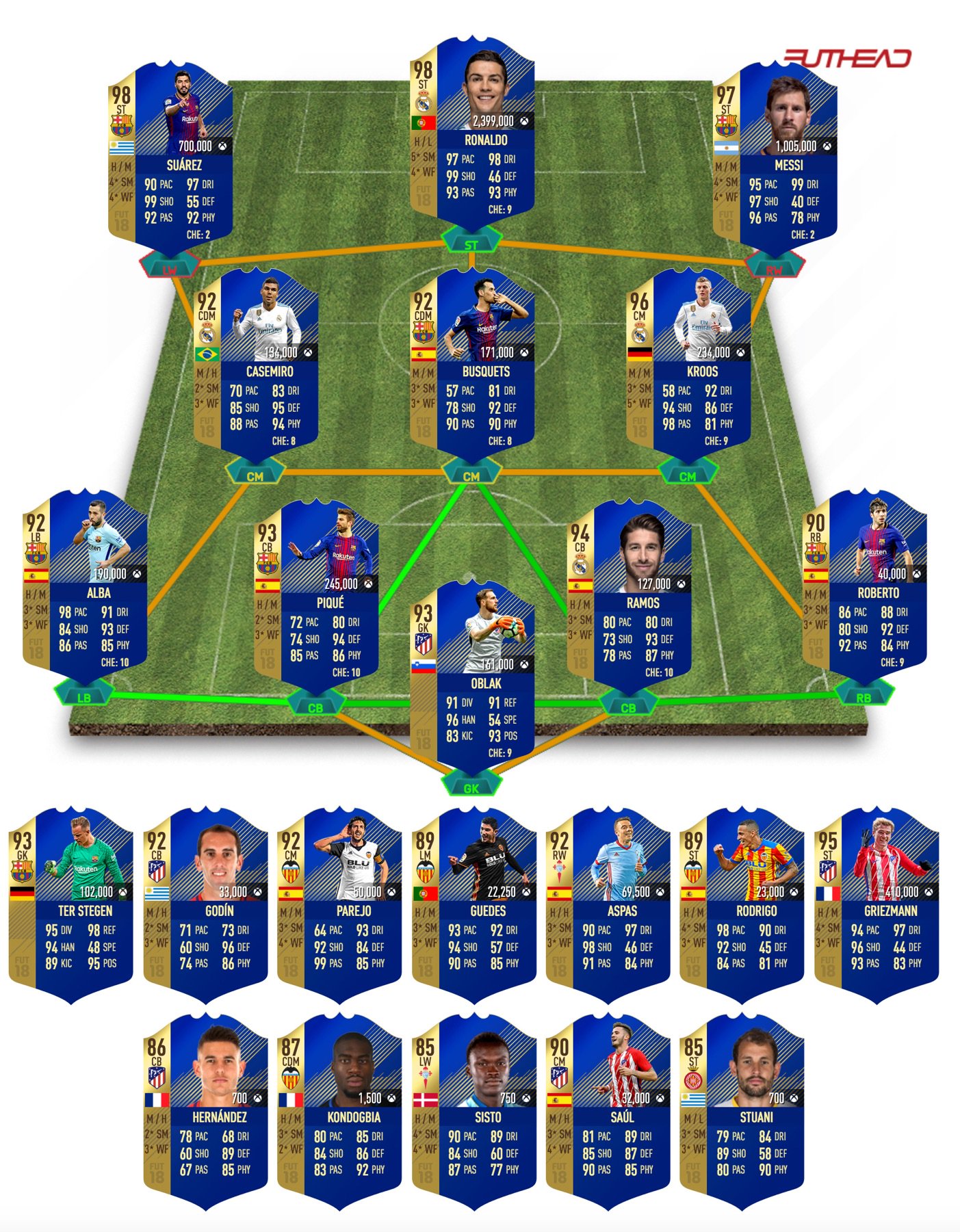 Jan Oblak - GK - OVR 88 The top tier of Spain has seen some simply ridiculous defensive records this season, but Atletico Madrid top the lot. Sitting in second position currently, Atletico can thank that to their defensively display with a miniscule amount of 18 goals being conceded over their 34 games, which is almost only one every other game! Oblak has already featured in Community TOTS however I am positive it won't be the last we see of him.

Jordi Alba - LB - OVR 87 Barcelona are still unbeaten in La Liga with 25 wins and 8 draws thus far. Although their attacking presence helps towards that the defensive side is equally as good, conceding just 19 goals in the 33 they have played. Alba is a great contributor to both ends of the spectrum, putting in the work defensively as well as chipping in offensively. Most of those attacking contributions come in the form of assists with the LB picking up eight assists, as well as recording two goals.

Pique - CB - OVR 87 This side was always likely to be dominated by Barcelona and although three defenders may well be pushing it I can see it happening. Pique is the second I have selected, largely down to his Community TOTS inclusion of which I feel will help his cause After all the defensive record Barcelona have is something to be proud of.

Sergio Ramos - CB - OVR 90 Although Ramos has probably not been at his best this year while he is still actively playing in the Madrid defense I fully expect to see him included year by year. It's very rare that you will see a player feature in TOTY only to then not receive a TOTS item. Three goals and an assist are what Ramos claims offensively this season which goes alongside a rather mediocre defensive record in comparison to their main rivals.

Sergi Roberto - RB - OVR 82 Although he has not been quite as impressive as Jordi Alba on the opposite flank, Roberto has still played a huge part to the side. He makes the cut for me for very similar reasons to Alba with defensive and attack being noticed in the RB's game. It's one goal and six assists to go alongside that already mentioned unbelievable defensive record held by Barcelona.

Toni Kroos - CM - OVR 90 Kroos can feel very hard done by from narrowly missing out on a TOTY spot, with him easily being inside the top three midfielders worldwide. Regardless of that we move onto TOTS which it would become a complete shamble if he misses out again. Four goals and six assists are the German’s official statistics, but he helps to control the game in the middle of the park.

Sergio Busquets - CDM - OVR 87 Another player that I feel is favored due to Community TOTS is Busquets. That's not to say he wouldn't have made it regardless as I still believe that he plays a huge role in Barcelona's side, but it cements the decision to include him. Although the defense will be highly praised for what they have managed this season without Busquets in front of them it could have been significantly different.

Casemiro - CDM - OVR 86 Over the past couple of seasons Casemiro has really stepped up to the plate, performing week in week out for Madrid. Although the main part of his game is defense he has also started adding attacking contributions to his game with five goals and three assists. EA also gave him a winter upgrade, which considering that he was already 5 rated states how good he has been.

Lionel Messi - CF - OVR 93 The first of three strikers which you would fully expect to make the cut is Messi. All three of these players have simply remarkable statistics, showing why they are known as three of the most prolific players in the world. The Argentine has recorded 29 goals and 12 assists in just 32 games. The good news is he has returned to a central position rather than his RW slot which we have seen while Neymar was at the club.

Luis Suarez - ST - OVR 92 Next up is Messi's striker partner, Suarez. Thankfully he has been in the headlines for the right reasons rather than biting opponents or such nonsense like that. He is the weakest of the three statistically but what do you expect. 23 goals and six assists in 28 games is still just over the contribution line of one per game which is something only a few players in the world manage to do.

Cristiano Ronaldo - ST - OVR 94 Finally, we have Ronaldo, the reigning Ballon d'Or winner. For me Messi has been the stand out performer in La Liga this season which considering that I am a Ronaldo fan says a lot. Ronaldo’s stats still speak wonders for his ability, scoring just under one a game at 24 in 25 with an additional six assists to go alongside that.

Marc-Andre ter Stegen - GK - OVR 87 I almost snubbed ter Stegen in place of Asenjo but when it came down to it I just couldn't ignore either of the top two defensive records in the division, simply because both are outstanding. The German boasts just 21 goals conceded in 34 games and received a +2-winter upgrade from 85 to 87 underlining just how good he has been.

Diego Godin - CB - OVR 88 There has not been as much hype surrounding Godin as there has been in previous years, but the Uruguayan is still performing to a high standard week in week out. As I have already mentioned Atletico's defensive record is simply remarkable once again and Godin is the one regular starter in that defense which makes it that much more impressive with constant changes. There have been no offensive contributions from him but it’s all about that defense.

Parejo - CM - OVR 84 Valencia look almost certain to become part of the top four and in turn claiming champions league qualification. Parejo has been a huge part of that success, once again being a dominant force in the midfield. The Spaniard has managed to score seven goals and assist another seven. His form has already been noticed by EA after he picked up a winter upgrade of two additional rankings.

Iago Aspas - RW - OVR 84 The Premier league is an interesting place with many players failing to break into a side before becoming dominant in another league. For the past two seasons now Aspas has been brilliant for Vigo with this one being simply a revelation for him. At one stage it looked as though he would seriously compete for the golden boot which when you consider his competition is ridiculous. He did end up falling short but with a tally of 20 goals in 32 games for a side like Vigo can’t be unnoticed.

Goncalo Guedes - LM - OVR 80 The growth of Guedes over the past three years has been simply phenomenal with the 20-year-old showing exactly what he is capable of for Valencia this season. He currently sits in joint second position for most assists with nine and has four goals to go with that. I expect many big clubs to look at him over the summer, especially if he can perform during the World Cup, something which he is more than capable of doing.

Rodrigo - ST - OVR 80 Arguably the weakest striker option I have opted to go with but still one that makes a good case for the side. With 16 goals and 7 assists to his name it puts him high up in terms of total goals contributed to. EA have already given him both a PTG and winter upgrade item, so it shows that they feel he is performing well this season, Well enough for a TOTS item? We shall see.

Antoine Griezmann - ST - OVR 88 It does seem strange to put Griezmann on the bench but if anything, it just shows the quality that this league contains. The French striker is just below what I would class as the elite three of Ronaldo, Messi and Suarez but still with 19 goals and 8 assists has been one of the stand out players in La Liga once again helping Atletico to fight at the top once more, currently sitting in second above Real Madrid.

Lucas Hernandez - CB - OVR 78 It now looks as though Atletico are going to maintain the best defense this season which when you consider that both Luis at LB and Vrsajko at RB both have missed chunks of the year (which is why I haven't included them in the prediction). A regular starter has been Hernandez, who at only 21 years of age has been dominant throughout. He was nominated for Community TOTS which shows that EA are considering him. I believe he will make the cut.

Geoffrey Kondogbia - CDM - OVR 80 I have included a fair few players from Valencia, which considering they are likely to come 4th in the division could be classed as a surprise but when you look at individual performances it becomes difficult to ignore them. Kondogbia is yet another player who both received a winter upgrade and was on the list for a community TOTS item. He gets the nod for his defensive performances alongside picking up both four goals and four assists.

Pione Sisto - LW - OVR 77 Yet again we continue the trend with Sisto. There was a lot of hype around this guy while he was playing in Denmark, but this is the first season he has seriously impressed over in Spain. At just 22 years old his performances suggest big things are going to come from the Danish winger. five goals and nine assists are what he can boast about for Vigo, which makes him their main player excluding Aspas.

Saul - CM - OVR 83 Saul has gone largely under the radar this season and due to that almost missed out on my prediction, he was the final player to be included. With just two goals and three assists statistically he doesn't stand out with other options boasting far superior stats. The difference is his all rounded game though and because of that you will struggle to find a squad without him in.

Christhian Stuani - ST - OVR 78 When you consider surprising seasons, I feel that Stuani is right up there. Girona have had a brilliant year, currently sitting way up in 9th position and Stuani has been a huge part of that. The Uruguayan striker has scored an impressive 19 goals which when Girona have only scored 47 in total shows how vital he has been.