FIFA 23 Team of the Week Prediction

Published on by FutheadNewsStaff 2 Comments 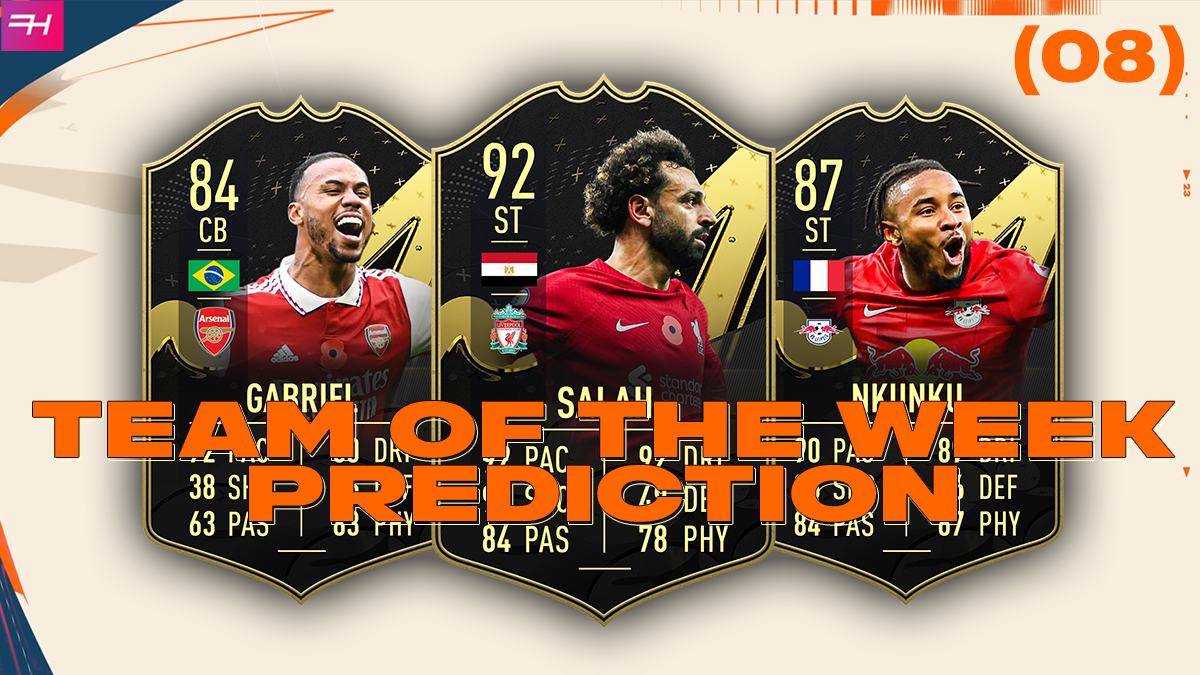 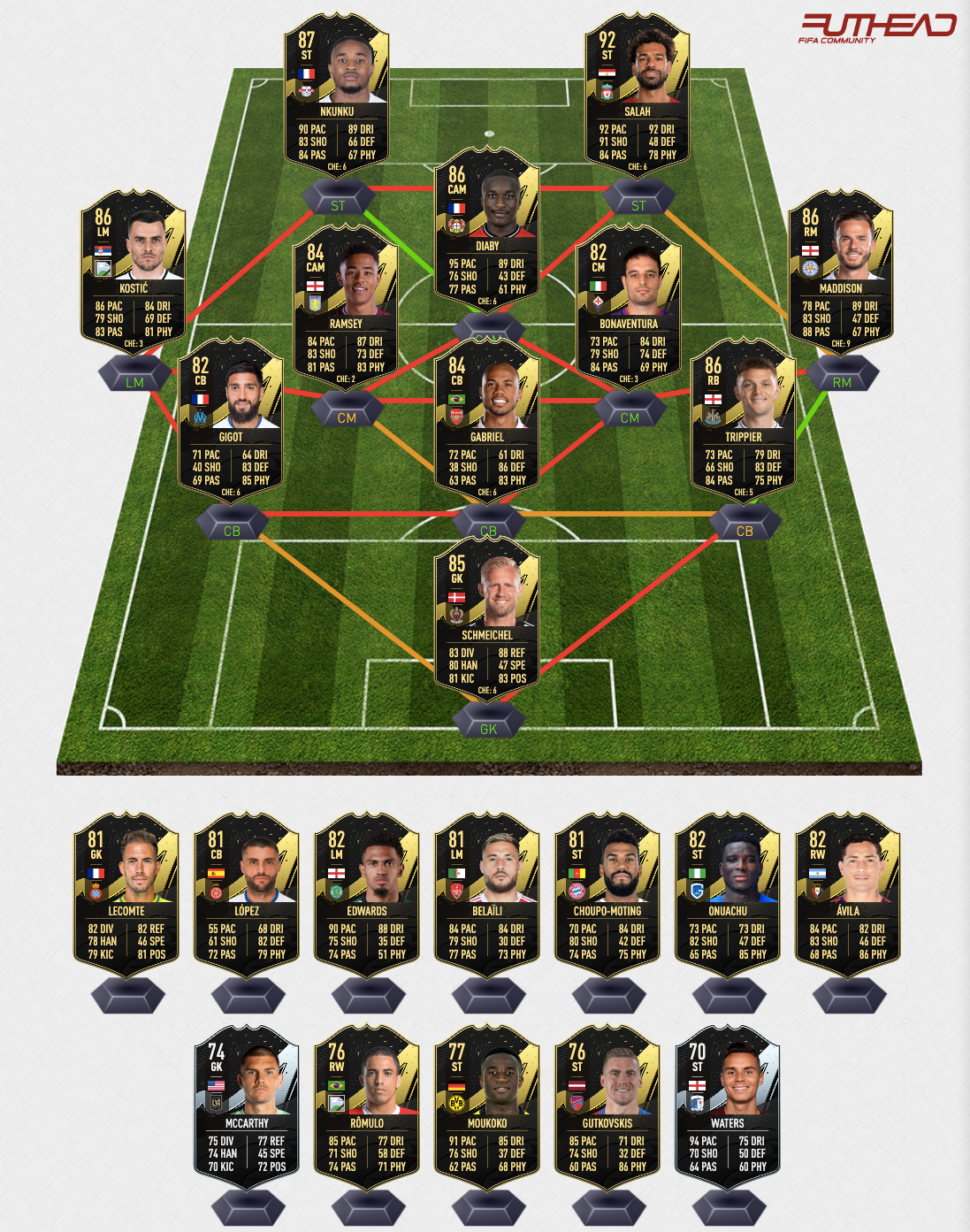 Schmeichel GK – OGC Nice - 83 -> 85 Rated: OGC Nice recorded a narrow 1-0 victory against Stade Brest on Sunday, making it back to back Ligue 1 wins. There have been a few standouts in that game, especially the defenders, but the best was Schmeichel who made a total of 8 saves to deny Brest a goal.

S. Gigot CB – Marseille - 78 -> 82 Rated: Olympique Marseille went back on winning ways after going four Ligue 1 games without a win, beating Olympique Lyon 1-0 on Sunday evening. The only goal of the game came from Gigot, who replaced the injured Eric Bailly, but also had to leave the pitch injured later on.

Gabriel CB – Arsenal - 81 -> 84 Rated: Chelsea fell to a second consecutive Premier League defeat on Sunday lunchtime, limply succumbing to a 1-0 defeat which sent Arsenal back to the top of the table. Gabriel was secure and safe in his own box, winning the majority of his duels before delivering a telling touch at the other and scoring the winning goal.

Trippier RB – Newcastle Utd. - 84 -> 86 Rated: Newcastle moved up to third in the Premier League table with a 4-1 win against Southampton thanks to goals from Almiron, Wood, Willock and Guimaraes and extended their unbeaten run to now nine games. Trippier put relentless pressure down the right and did some polished defensive work. A sumptuous assist for Willock after the break with a defence-splitting pass rounded of his good game.

Bonaventura CM – Fiorentina - 78 -> 82 Rated: Fiorentina made it back to back wins in the Serie A with a comfortable 2-0 victory away at Sampdoria on Sunday afternoon. Italian veteran Bonaventura scored one oft he goals for his side and picked up a 7.5 match rating and MOTM from Gazzetta which could be enough for an inform due to the lack of Serie A options this week.

J. Ramsey CAM – Aston Villa - 75 -> 84 Rated: Aston Villa recorded a famous win over Manchester United on Sunday evening, winning their first game under new coach Unai Emery. Jacob Ramsey delivered a really great performance. Unfortunate to score an own goal but quickly made amends with a lovely finish at the other end and also got an assist.

M. Diaby CAM – Leverkusen - 84 -> 86 Rated: Bayer Leverkusen recorded one of biggest results on the weekend, trashing former Bundesliga leaders 5-0 on Sunday afternoon. There have been a few standout players in that game but the biggest was Moussa Diaby who scored twice for his side and picked up a 1.5 match rating from Kicker.

J. Maddison RM – Leicester - 84 -> 86 Rated: Leicester continued their upturn in form with an impressive 2-0 victory over Everton at Goodison Park on Saturday evening. Maddison was excellent as always, had lots of good chances at goal, two assists toa dd to his tally but doesn't do him justice in how good his performance was.

F. Kostic LM – Juventus - 85 -> 86 Rated: Juventus and Inter met in a game of two sides which are struggling in the league so far this season and Juventus got the better outcome of the game, beating their opponents with 2-0. Filip Kostic was one of the standouts, assisting both of the games for Juventus.

C. Nkunku ST – RB Leipzig - 86 -> 87 Rated: RB Leipzig ended a run of eight away Bundesliga matches without a win and extended their unbeaten run across all competitions to now 11 games with a comfortable 3-1 win against Hoffenheim. French international Nkunku scored two of the goals and should pick up the inform this week.

M. Salah ST – Liverpool - 91 -> 92 Rated: Liverpool managed to hold off a late rally to secure a 2-1 win at Tottenham on Sunday and their first away win in the Premier League his season. It’s a bit of a shame that Salah is hitting this level of fiorm at this point as he will be without competitive football for a while but he was the difference again, scoring both goals for his side.

B. Lecomte GK – RCD Espanyol - 77 -> 81 Rated: There have been way less good performances from gold goalkeepers this week than in previous, one who could feature in this week’s TOTW is French goalie Lecomte after he made a total of 7 saves in Espanyol’s 1-1 draw away at Atletico Madrid. Important to mention that Espanyol were down to 10 men for more than an hour.

D. Lopez CB – Girona FC - 77 -> 81 Rated: Girona picked up important three points with a narrow 2-1 victory over Athletic Bilbao which was their first win in six La Liga games. David Lopez was the most important player for his side, scoring one and assisting the other and could pick up the inform this week.

M. Edwards LM – Sporting CP - 78 -> 82 Rated: Sporting CP recorded a 3-0 win against Vitoria Guimares and went back on winning ways and Marcus Edwards came off the bench and was involved in all three goals, scoring two of them and assiting the third.

Belaili LM– Stade Brestois 29 - 76 -> 81 Rated: Ligue 1 side Ajaccio registered a comeback win against Strasbourg on Saturday, coming back from being 2-0 to beat their opponents with 4-2 thanks to a brace of penalties and an assist from Algerian international Belaili.

Avila RW – CA Osasuna - 79 -> 82 Rated: Avila could be another player to pick up an inforn this week although he just recently git a Rulebreaker card. The Argentine forward played on the RW position and scored both goals for his side in their 2-1 win against Celta Vigo on Saturday.

Choupo-Moting ST – FC Bayern - 75 -> 81 Rated: Bayern Munich were given a scare by relegation-threatened Hertha BSC on Saturday afertnoon, holding on to secure a 3-2 victory. Choupo-Moting continued his absolutely insane goalscoring run, adding another two to his league tally and made people and fans forget that Lewandowski was at the club not long ago.

Onuachu ST – KRC Genk - 79 -> 82 Rated: KRC Genk continued their insane form across all competitions in 2022/23, not having lost a game since the end of July, beating Sporting Charleroi 4-1 on Friday thanks to four goals from Nigerian forward Onuachu who definetly will pick up the inform for that.

McCarthy GK – LAFC - 64 -> 74 Rated: LAFC were crowned MLS Cup champions for the first time as they beat the Philadelphia Union 3-0 on penalties following an incredible 3-3 draw. John McCarthy came on and made a crucial save to deny Carranze but more important have been his two saved penalties in the shootout against his former team to seal the win and trophy for LA!

Romulo RW – Chengdu - 67 -> 76 Rated: There have been a few CSL players the past weekend with good performances, one of them with a really good chance to be in the side this week is Romulo who scored 3 goals in Chengdu's 6-0 victory over Hebei.

Moukoko ST – Borussia Dortmund - 69 -> 77 Rated: Borussia Dortmund moved to within three points of leaders Bayern Munich, who beat Hertha Berlin, after a dominating attacking performance against Bochum in the Revierderby. At 17-years and 350 days, Moukoko became the youngest player in Bundesliga history to score 10 goals. His 10th goals was superbly taken, cutting inside from the right before bending the ball past Rieman. His 11th league goal showcased his composure when Riemand was caught in no man's land and Moukoko found the net from 35 yards.

Waters ST – Barrow - 60 -> 70 Rated: There have been a few midweek games from the lower english leagues due to cup games the past weekend and we could probably see an inform coming from those. Billy Waters scored three times in Barrow's 3-1 against Colchester.

Gutkovskis ST – Rakow - 67 -> 76 Rated: Rakow recorded the highest win the past weekend, trashing Wisla Plock with 7-1 and Latvin attacker Gutkovskis scored four of the goals for his side.