FIFA 23 Team of the Week 6 Prediction

Published on by FutheadNewsStaff 3 Comments 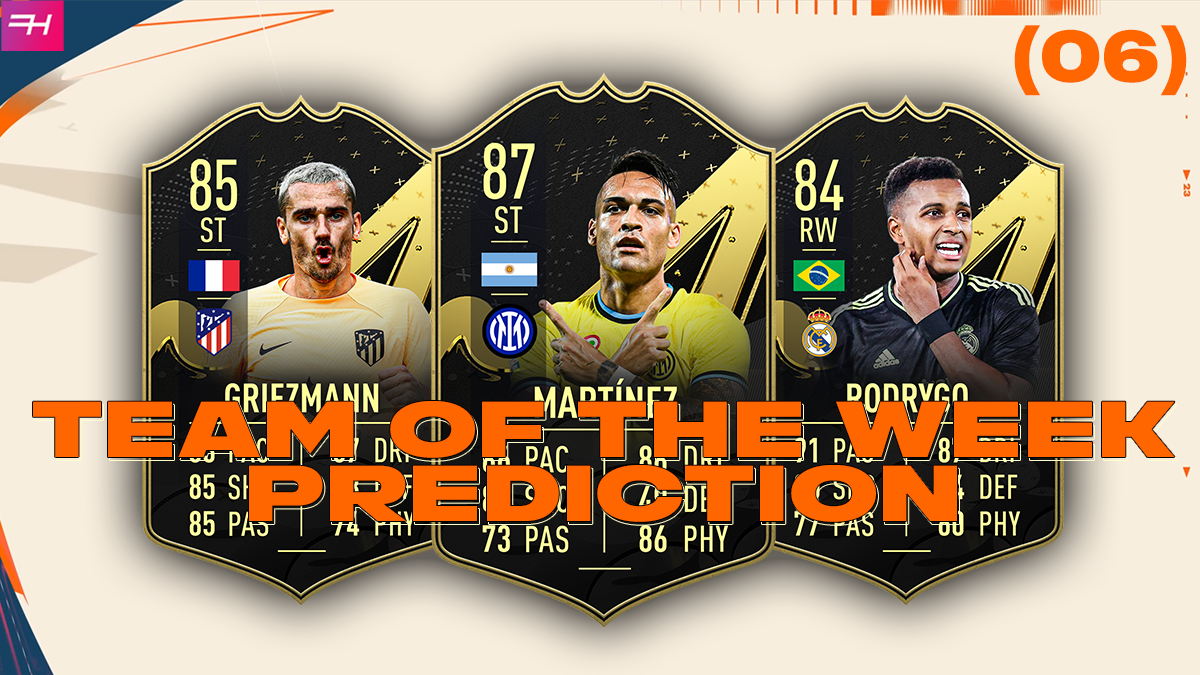 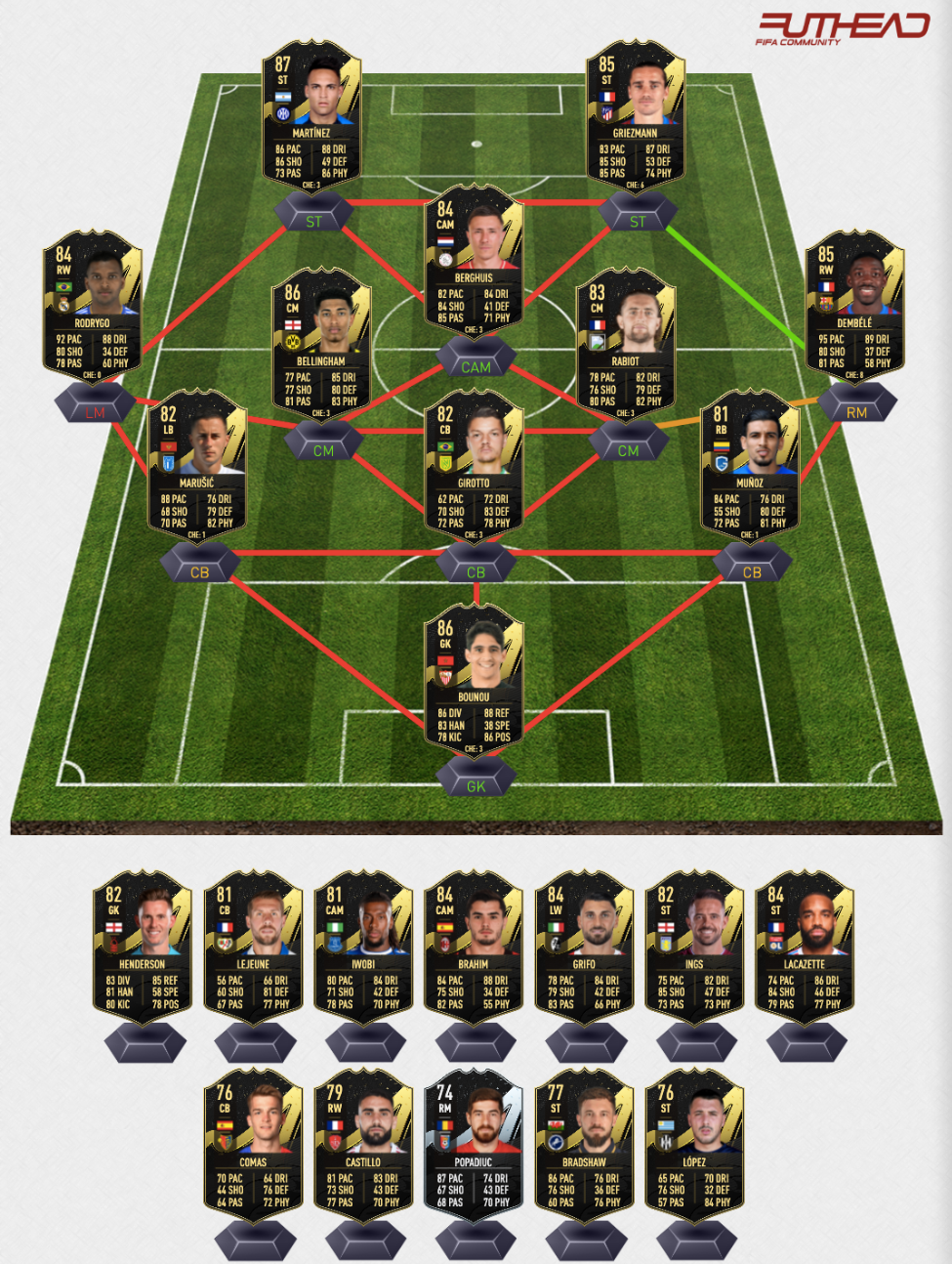 Bounou GK – Sevilla FC - 84 -> 86 Rated: There are a couple of goal keeper options this week especially after La Liga and Premier League had an extra matchday in the middle of the week. In-form Bounou could be the starting goalkeeper this week after he made a total of 4 saves midweek against Valencia, including a penalty stop in the 11th minute of extra time to save a point for his side.

Marusic LB – Latium - 79 -> 82 Rated: Lazio recorded a prestige 2-0 victory over Atalanta Bergamo on Sunday evening and while Anderson was named MOTM I'm instead going wit Marusic wo assisted one of the two goals, kept a clean sheet and also got a 7.5 match rating from Gazzetta.

Girotto CB – FC Nantes - 78 -> 82 Rated: There is a clear lack of good defenders this week but Ligue 1 usually is a reliable source when it comes to picking one and it's the same this week. Nantes and Nice drew 1-1 and with Nantes having received two red cards Girotto made sure his side at least kept a point.

Munoz RB – KRC Genk - 75 -> 81 Rated*: Genk remains on top of the 1A Pro League table after their 6-1 trashing midweek against Westerloo. With Man of the Match Paintsil being silver I'm instead including Daniel Munoz who scored two of his side's goals.

Bellingham CDM – Borussia Dortmund - 84 -> 86 Rated: Borussia Dortmund got back to winning ways in fine fashion as they trashed VfB Stuttagrt 5-0 at the Westfalenstadion. What a performance from the 19-year-old as he ran the show from the middle of the park, and scored two great goals to take his tally for the season to eight in all competitions. The young Englishman had an all-round accomplished performance and deservedly was named MOTM.

Rabiot CM – Juventus - 80 -> 83 Rated: Juventus hosted Empoli for the opening fixture of the 11th matchday and this turned out to be the Bianconeri's best performance since the start of the campaign as they beat the visitors with 4-0. The Frenchman has been growing from strength lately and bossed the midfield with his relentless pace, and broke his lengthy Serie A drought by scoring twice in the late stages of the game.

Berghuis CAM – Ajax - 82 -> 84 Rated: Ajax Amsterdam cemented their top spot in the Eredivisie with a comfortable 4-1 victory against RKC Waalwijk and after we haven't seen an Ajax inform last week we should see Berghuis getting in after he scored twice and also registered an assist.

Rodrygo RW – Real Madrid - 81 -> 84 Rated: La Liga's basement-dwellers Elche fell to a 3-0 defeat at home to Real Madrid on Wednesday night. Rodrygo got two assist that game, as he continues to impress. He combined with Benzema for the second, and picked out Marco Asensio for the third. Elche had no answers for him at times, and he will surely try to continue the next weeks.

O. Dembele RW – Barcelona - 83 -> 85 Rated: Before the game against Bilbao I was pretty sure to include Lewandowski but then Dembele decided to turn things around. Barcelona kept pace with Real Madrid and recorded a comfortable 4-0 victory against Bilbao and with Dembele scoring one and assisting the other three it's impossible to not include the Frenchman.

Griezmann ST – Atletico de Madrid - 83 -> 85 Rated: Atletico de Madrid took all three points in their top of the table clash against Real Betis on Sunday afternoon, winning narrowly with 2-1. Both goals came from French interntional Antoine Griezmann in the second half of the game and he should pick up the inform this week, except he'll be in the next promo on Friday.

L. Martinez ST – Inter - 86 -> 87 Rated: Inter beat Fiorentina away 4-3 at the Stadio Artemio Franchi after a classic Pazza Inter performancewhere Mkhitaryan scored the winner deep into injury time. One of Inter's only consistently world class player who also helps the team defensively sacrificing himself when working hard. Scored a stunning goal, made a lovely assist and a top class penalty to seal all three points for his sode.

Henderson GK – Nottingham Forest - 79 -> 82 Rated: Nottingham Forest brought an end to their winless league run in style as they toppled Liverpool 1-0 at the City Ground on Saturday with Awoniyi's goal proved to be the difference between the two sides. Dean Henderson delivered another top performance after his heroics midweek against Brighton, ending the game with seven saves including an incredible stop to deny van Dijk.

Lejeune CB – Rayo Vallecano - 77 -> 81 Rated: With two matchdays from La Liga counting towards TOTW we have more options to choose from, this one tho is from the weekend fixtures. Vallecano recorded a 5-1 victory over Cadiz on Saturday and Lejeune scored two of the goals and despite conceding one it should be enough for him to get in.

A. Iwobi CAM – Everton - 75 -> 81 Rated: Everton ended a run of three straight defeats as goals from Calvert-Lewin, Gordon and McNeil secured them a 3-0 victory against Crystal Palace. Everton's most-creative outlet, he provided the assist for two goals, laying on a delicious pass for Calvert-Lewin to net the opener before his cheeky back-heel teed up substitute McNeil to complete a slick one-two for the third.

B. Diaz CAM– Milan - 78 -> 84 Rated: AC Milan got the job done against Monza as they managed to find the back of the net four times, recording a comfortable 4-0 victory. Brahim Diaz was the undisputed MOTM this evening with two brilliant goals to unlock the game but was subbed off later with an injury which hopefully isn't too serious.

Grifo LW – SC Freiburg - 81 -> 84 Rated: Freiburg went back on winning ways after their heavy 0-5 defeat the weekend before against record champs Bayern, picking up all three points at home with a 2-0 victory over Werder Bremen. Italian international Grifo scored one from the spot and assisted another and could pick up the inform this week.

Ings ST – Aston Villa - 79 -> 82 Rated: The Australian A-League returned two weeks ago and thus we could expect a couple of informs from down under in the future. One we could see this week is MacLaren after he scored both goals in Melbourne City's 2-0 victory against Brisbane Roar, making it two wins ouf of two games.

Lacazette ST – Lyon - 81 -> 84 Rated: Olympique Lyon recorded a much-needed 2-1 victory against Montpellier after they fell to a 3-2 defeat to Rennais the weekend before. Former Arsenal London attacker Alexandre Lacazette was the decisive player on that night, scoring the important winning goal and also assisted Aouar for the opening goal of the game.

Comas CB – FC Basel - 66 -> 76 Rated: FC Basel picked up all three points on Sunday, beating FC Winterthur with 3-1 and defender Comas scored two of the goals for his side.

Del Castillo RW – Stade Brestois 29 - 73 -> 79 Rated: With basically no hat-tricks from silvers this week we could see a few different reserves in predictions this week and one who could make it is Del Castillo after he scored one and assisted another two in Brest's 3-1 win away at Clermont Foot.

Popadiuc RM – AFC Chindia - 64 -> 74 Rated: Another silver inform could come from Romania this week in the name of Popadiuc who scored all three goals for his side in their 3-0 win against Voluntari.

Bradshaw ST – Millwall - 69 -> 77 Rated: Millwall picked up their third straight Championship win last week with a comfortable 3-0 win against Watford and with Bradshaw scoring all three goals for his side we could expect him to be in the side on Wednesday.

R. Lopez ST – Central Cordoba - 67 -> 76 Rated: It feels like I'm having weekly flashbacks but once again we're going to predict a Liga Profesional inform, this week in the name of Renzo Lopez who scored three times and assistes another in Central Cordoba's 4-1 victory over Union.