FIFA 23 Team of the Week 5 Prediction

Published on by FutheadNewsStaff 5 Comments 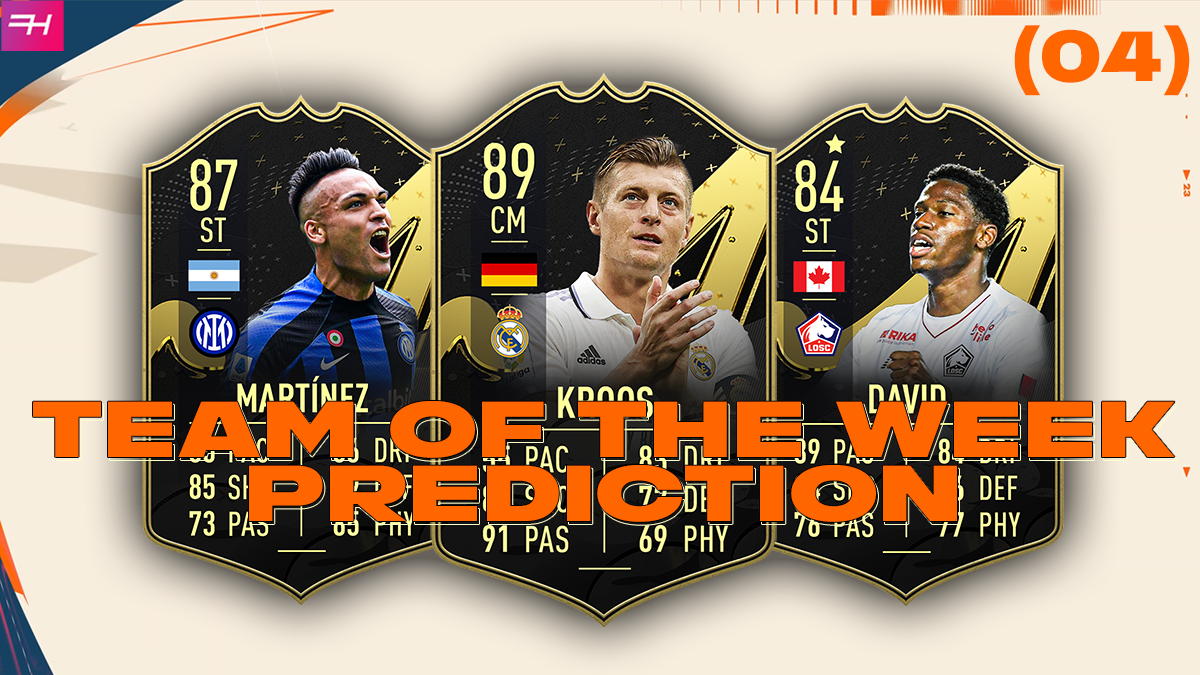 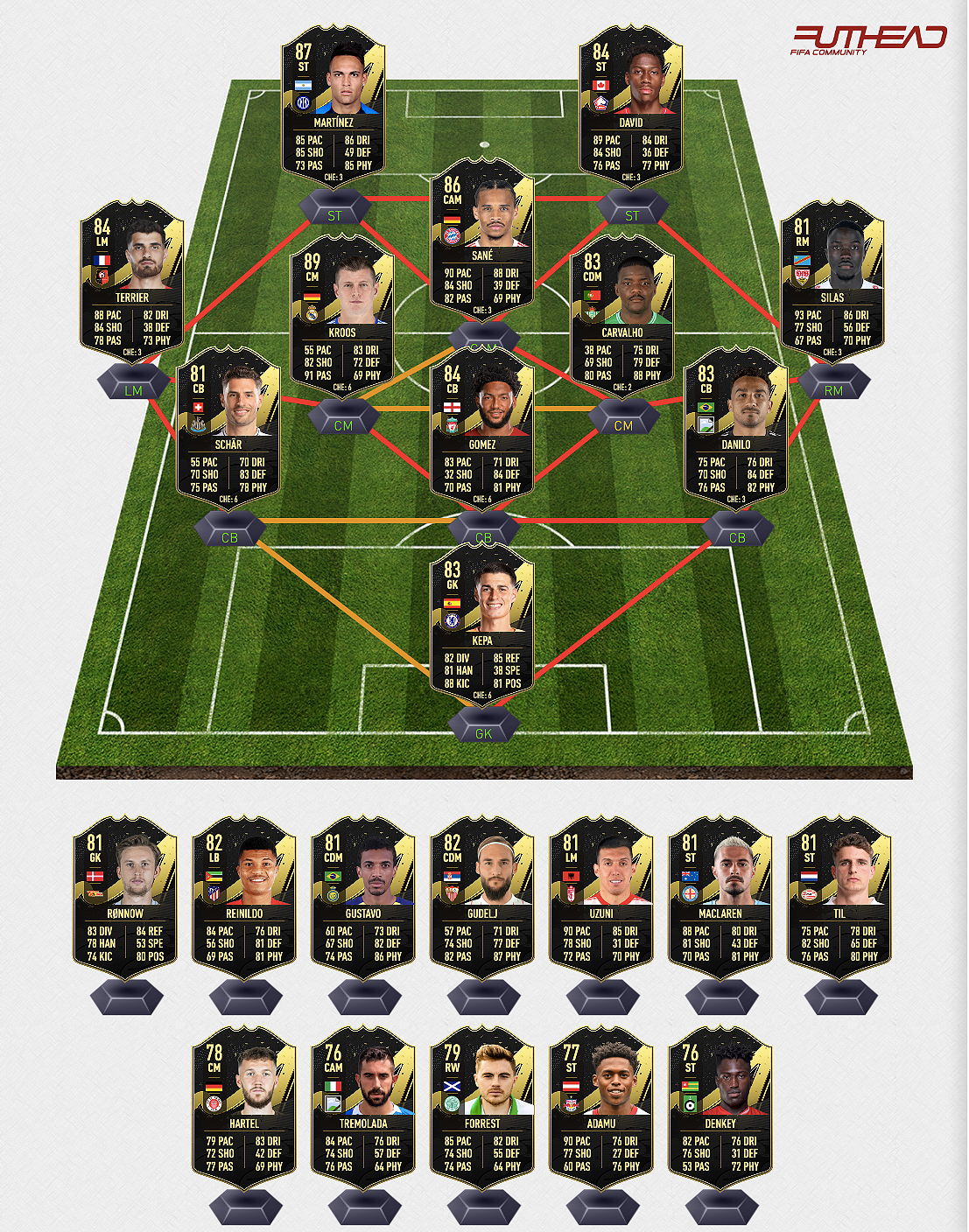 Kepa GK – Chelsea - 80 -> 83 Rated: A double from Mason Mount helped Chelsea record their fifth consecutive victory in all competitions with a 2-0 success at Aston Villa. A brilliant display of shot-stopping kept Villa at bay during the first half, especially with Kepa's stunning triple save. Workload decreased somewhat in the second period but his side have to thank him for the victory.

J. Gomez CB – Liverpool - 81 -> 84 Rated: Liverpool brilliantly executed a considered game plan to earn a 1-0 victory at home to Manchester City on Sunday. Making a rare start this evening it took a while for Gomez to settle especially as City took control of the proceedings before Salah's goal. Once he grew into the game Gomez was outstanding and rightfully named Man of the Match for keeping Haaland quite.

F. Schär CB – Newcastle Utd - 77 -> 81 Rated: Newcastle United put another point on the board thanks to a 0-0 drw with Manchester United on Sunday afternoon. Eddie Howe's side defended brilliantly at Old Trafford and Schär was in the wars, recovering from an early tumble down a slope off the side of the pitch to marshal the backline and made sure his side kept the clean sheet.

Danilo CB – Juventus - 88 -> 83 Rated*: Juventus earned the Derby della Mole bragging rights once again on Saturday night, beating Torino 1-0 in a nervy affair in Turin. The former Real Madrid man Danilo played in the heart of the defense as he gradually makes a transition towards a more central role. Proved to be a rock at the back while also providing the assist for Vlahovic with a header.

T. Kroos CM – Real Madrid - 88 -> 89 Rated: Real Madrid defeated Barcelona 3-1 at the Santiago Bernabeu in what was a team victory with stand out individual performances. One was Toni Kroos who was the chief ball distributor of the ball for Los Blancos and had a great game. He basically got the assist for Karim Benzema's opener and was orchestrating the midfield for his side.

Silas RM – VfB Stuttgart - 75 -> 81 Rated: VfB Stuttgart recorded their first win of the season in a game which could end up being called a relegation six-pointer at the end of the season, picking up a 4-1 win at home against Bochum. Man of the Match was Silas who scored twice and assisted another and was a constant threat throughout the game.

M. Terrier LM – Stade Rennais FC - 81 -> 84 Rated: New Lyon coach Laurent Blanc could not have asked for a much tougher first assignment as coach than a trip to in-form Rennes. His first game ended in a 3-2 defeat and former Lyon player Terrier scored twice, including the all-important winner.

L. Sané CAM – FC Bayern - 84 -> 86 Rated: Bayern Munich ran riot over SC Freiburg, stomping the opposition 5-0 in the Allianz Arena in what was a complete performance from top to bottom. Sané was arguably the best player on the night and maybe got the goal of the evening when he slammed home from around 19 yards leaving Flekken standing still. He also registered an assist, a Man of the Match performance.

W. Carvalho CDM – Real Betis - 80 -> 83 Rated: There have been a few midfielders this week who could pick up an inform because of their performances, one of them is William Carvaljo who scored two of Real Betis' three goals in their 3-1 victory over Almeria on Sunday.

J. David ST – Lille - 79 -> 84 Rated: LOSC Lille cruised to a 3-0 win away at RC Strasbourg Alsace on Friday. The Canadian striker David continued his fine form, scoring two of the goals with one from the penalty spot and is now the league's leading scorer with nine goals to his name already. An 8 match rating and MOTM from L'Equipe could be enough for his first inform and maybe even FTOTW.

L. Martinez ST – Inter - 86 -> 87 Rated: Inter Milan took all three points as they eased to a comfortable 2-0 victory over Salernitana on Sunday afternoon. Lautaro Martinez ended his goal drought, assisted by Barella before the Italian international then scored the second goal for his side but with Martinez gbeing rewarded with a 7.5 which was the highest match rating in Serie A this week I'm going with him.

Rönnow GK – Union Berlin - 75 -> 81 Rated: Union Berlin's fairytale run in the german top-flight continues after they took all three points, beating Borussia Dortmund 2-0 on Sunday afternoon. Union's shot-stopper Rönnow could pick up an inform this week after he made a total of six saves to make sure his side kept the clean sheet and picked up all three points.

Reinildo LB – Atletico de Madrid - 79 -> 82 Rated: Atletico Madrid won an old-school battle with Athletic Club Bilbao at the San Mamés thanks to an Antoine Griezmann goal. The one who could pick up the inform is Reinildo who took Nico & Inaki Williams out of the game with his excellent defending, created a great chance for Koke and most important, saved a shot off the line and blocked a shot with his head late on.

L. Gustavo CDM – Al Nassr - 75 -> 81 Rated: It went quiet with Luiz Gustavo since the former Bundesliga player joined Al-Nassr but this week we should see him getting an inform after he scored twice and assisted another in his side's 4-0 win against Al Fayha.

N. Gudelj CDM– Sevilla FC - 79 -> 82 Rated: Sevilla is struggling so far this season, sitting only three points clear of the relegation-zone at the moment after their narrow 1-0 victory away at RCD Mallorca. The only goal of the game came from Serbian midfielder Gudelj who scored a stunner from 30-yards to seal all three points for his side.

M. Uzuni LM – Granada CF - 75 -> 81 Rated: Granada went back on winning ways after two consecutive La Liga Smartbank draw with a trashing 5-0 at home against Sporting Gijon. There are two strong contenders for an inform from that game, one is Uzuni who scored twice and also registered an assist.

J. MacLaren ST – Melbourne City - 75 -> 81 Rated: The Australian A-League returned two weeks ago and thus we could expect a couple of informs from down under in the future. One we could see this week is MacLaren after he scored both goals in Melbourne City's 2-0 victory against Brisbane Roar, making it two wins ouf of two games.

G. Til ST – PSV - 75 -> 81 Rated: Eredivisie provided two high scoring games the past weekend, one of them was PSV Eindhoven's 6-1 trashing against Utrecht. There have been a couple of players who got on the scoresheet, one of them is Guus Til who scored twice and could pick up the inform this week.

Tremolada CAM – Modena - 68 -> 76 Rated: Serie B side Modena registered their third straight win on the weekend with a 5-1 against Como and Tremolada assisted four of his side's goals.

M. Hartel CDM – FC St. Pauli - 70 -> 78 Rated: St. Pauli took the derby spoils against City rivals Hamburg in the Matchday 12 opener on Friday night, scoring three second-half goals to down their visitors, who were reduced to 10 men early on. Man of the Match was Marcel Hartel who pulled the strings in midfield and scored one of the goals by himself while also registering an assist.

J. Forrest RW – Celtic - 73 -> 79 Rated: Celtic Glasgow remains on top of the Premiership table after the recorded a trashing 6-1 at home against Hibernian. James Forrest made the headlines that night, scoring three of the goals from the RW position.

J. Adamu ST – RB Salzburg - 69 -> 77 Rated: RB Salzburg took another three points on the weekend with a 3-1 away at Austria and Junior Adamu was the standout player, scoring all three goals for his side.

Denkey ST – Cercle Brugge - 66 -> 76 Rated: Cercle Brugge bounced back from their defeat the weekend before and recorded a comfortable 5-1 win against Eupen. Kevin Denkey was the Man of the Match for his side, scoring three goals and should be in the squad this week.