Fifa 22 Ones to Watch Team 2 Prediction

Published on by Simpleblue 10 Comments 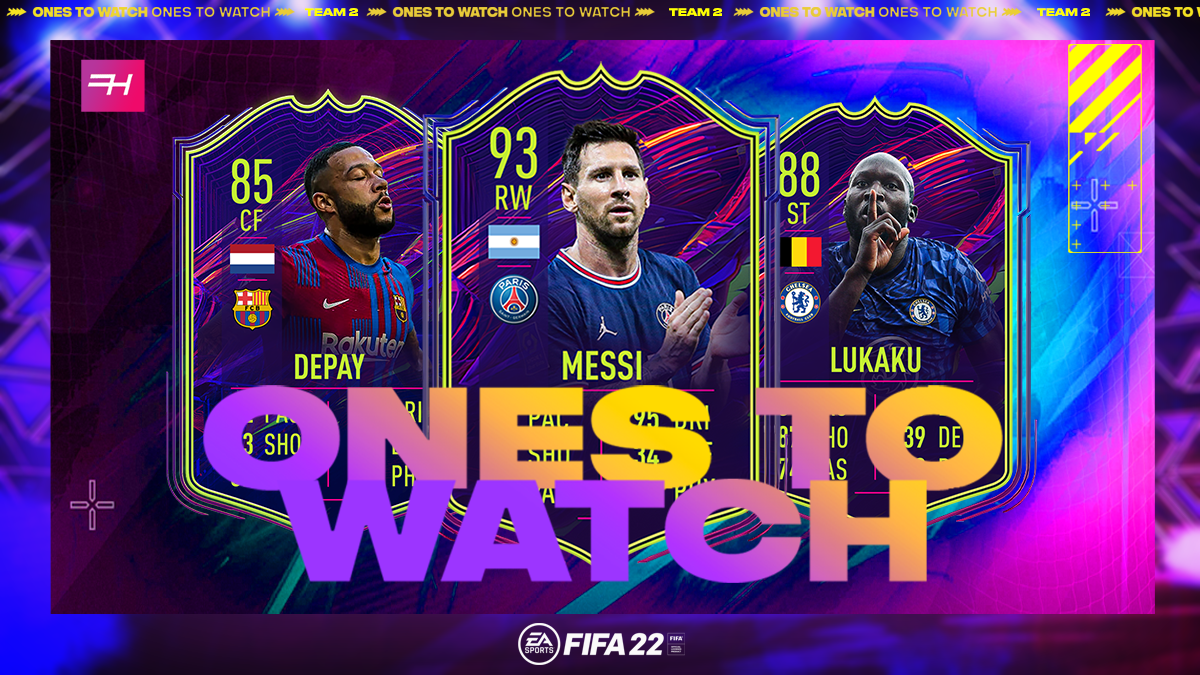 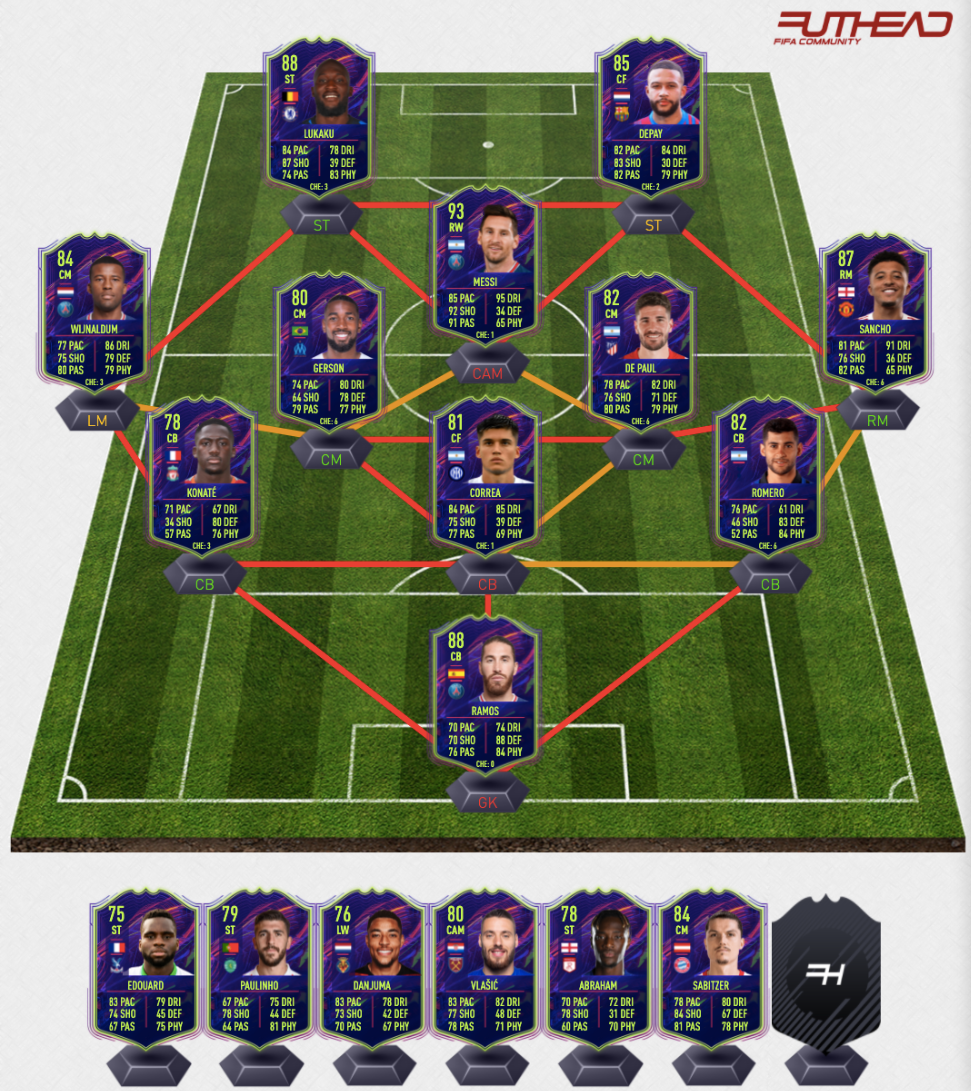 S. Ramos CB – Paris SG - 88 Rated: Paris SG arguably had the biggest summer transfer window this year and signed a ton of top players, most of them on a free-transfer. One of them is former Real Madrid captain Sergio Ramos who hasn't played a game yet for his new club but who was confirmed earlier as an Ones to Watch. One upgrade should be at least guaranteed with the changed system but beside that I'm not sure it's a card with much potential for upgrades.

I. Konaté CB – Liverpool - 78 Rated: It was no secret Liverpool would be signing a new centre-back this summer after the defensive injury crisis which derailed their Premier League title defence last season. Recruiting players who have learned their game within the Red Bull organisation has become a theme for Liverpool, but the Merseysiders need no extra reason to pursue Konate, of course. This is a central defender of speed, strength and skill, who, at the age of 22, is ready to take the next step. Already there is excitement at the potential of a partnership with Virgil van Dijk.

C. Romero CB – Tottenham - 82 Rated: The Centre-back position has been a bit of a problem position for Tottenham after Vertonghen and Alderweireld left the club but Tottenham filled the gap with the signing of the 23-year-old Argentinian international for a fee of 42m pounds on a five-year deal. A young, promising player who had a remarkable season at Atalanta and who could be a good investment on a low budget.

G. Wijnaldum CM – Paris SG - 84 Rated: As I mentioned earlier, Paris Saint-Germain signed a bunch of top players and I expect most of them being included in the promo, one of the could be the Dutch international Wijnaldum. Wijnaldum left Liverpool at the end of last season after not opting to sign an extension to his contract, and joined Paris Saint-Germain on a free transfer, signing a three-year deal with the Ligue 1 club.

R. De Paul CM – Atletico Madrid - 82 Rated: After spending the summer as Lionel Messi's right-hand man in Argentina's Copa America victory, Rordrigo de Paul returned to club duty. As they go in search of what would be an historic title defence, Atlético Madrid beat a number of teams to the punch to recruit De Paul from Udinese – the place where he had cemented himself as one of Europe's most coveted midfielders during recent seasons. In linking up with Diego Simeone on his return to Spain – a fellow Argentinean and former midfielder himself – De Paul will be looking to take a another step towards his final growth as a player and could be one of the most exciting signings for the 2021/22 season.

Gerson CM – Marseille - 80 Rated: Marseille made one of the most eye-catching signings apart from Paris SG this summer with signing Gerson from Flamengo for a reported fee of 25m. Marseille is his third stop in Europe after he failed to impress at Roma and Fiorentina back in the days and now it's probably the right time to play in an Eurpean top league after he established himself as a key player in Brazil. It's an interesting card who, with one or two upgrades, could be very useful for hybrids.

J. Sancho RM – Manchester Utd. - 87 Rated: Jadon Sancho finally moved back to Manchester from Borussia Dortmund this summer, ending one of the most protracted transfers sagas of recent years. He left Man City in 2017 as a teenage prospect and has returned to England four years later as one of the best young talents in world football. Sancho flourished with Borussia Dortmund and has shown not only does he possess the tricks and flicks, but he can score with regularity too and will strenghten United's right wing as Ole Gunnar Solskjaer's side look to challenge for the Premier League title.

J. Correa CF – Inter - 81 Rated: Correa asked Lazio for a move away from Rome twice over the last few months and this summer the Argentinian international finally joined Inter Milan. Having joined Lazio in 2018, Correa scored 30 goals in 117 appearances for the Biancocelesti in a three-year spell and following Edin Dzeko, the 27-year-old is another important reinforcement for the Nerazzuri after Romelu Lukaku returned to Chelsea.

M. Depay CF – FC Barcelona - 85 Rated: After four and a half years of impressing Ligue 1 fans with his obvious talents, Memphis Depay sealed a transfer to one of the biggest football clubs in the world in joining FC Barcelona from Lyon. He'll once again play under coach Ronald Koeman, with the two having had a successful partnership for the Dutch national team. He may have only played a few matches for his new club, but Memphis Depay is already delighting Barcelona Fans and even though he can't fill the hole Messi's departure left, he might make it easier for everyone if he can keep up his recent performances.

R. Lukaku ST – Inter - 88 Rated: One of the most profilic strikers in European football, Lukaku has returned to the club he supported as a young boy and where he has unfinished business, having been on their books between 2011 and 2014. It has been a journey with ups and downs since he left Chelsea but these experiences made him stronger and he already proved that he will be one of Tuchel's key players this season. Also already confirmed as an Ones to Watch and a card who should at least be guaranteed two upgrades.

L. Messi RW – Paris SG - 93 Rated: It was 10pm in Barcelona on Thursday when PSG made their move for Messi after Barcelona communicated that they're not able to renew Messi's contract due to the new La Liga restrictions. It was a move no one thought will ever happen but here we are now, having a confirmed (who would have thought) Messi Ones to Watch.

O. Edouard ST – Crystal Palace - 75 Rated: Now talking about possible Objective & SBC players, one of my options is Odsonne Edouard who joined Crystal Palace after a really good season at Celtic. It's a decent looking card which could get one or two upgrades, he already scored four goals in all competitions so far for his new side.

Paulinho ST – Sporting CP -79 Rated: Okay let's talk about Paulinho. This Ones to Watch is already confirmed (Fabrizio Romano did it on stream or Instagram, not 100% sure) but the fact why I say it's a weird one is that Paulinho joined Sporting CP already back in January this year from Braga so either EA made a mistake and mixed things up or players from past transfer windows are surprisingly able to get an OTW the next Fifa. We will see if he really be in Team 2 but even if he is, he will most likely be discard.

Danjuma LW – Villareal CF - 76 Rated: A more interesting transfer is the one from Danjuma to Villareal in the summer. The Dutchman joined Villareal for a fee of 23m after his really good last season at Bournemouth (17 goals and 8 assists in all competitions) and it looks like he doesn't time much time to adapt to the new league and club. He just recently scored both goals in Villareal's 2-0 win over Betis and I predicted him to be in TOTW on Wednesday, it's a cheap and good looking card.

N. Vlasic CAM – West Ham - 80 Rated: One of the few players who made it into my prediciton from outside of a top league (no disrespect) is Vlasic. West Ham paid 30m for him to make his move happen from ZSKA Moscow and if you've followed Russian football a bit closer you know that this move is deserved for him. 12 Goals and 6 assists might not be the highest numbers compared to others in that position but he was one of ZSKA's most important players and it will be interesting to see how he will perform in England.

T. Abraham ST – Roma FC - 78 Rated: Lukaku arrived at Chelsea as their new top striker and thus Abraham left the club as he found first-team opportunities limited. Roma made their interest clear immediately and signed Abraham on a five-year deal, making him their starting striker. And it looks like it was a good move for him, he already scored two five goals and assisted another two in seven games for his new side.

M. Sabitzer CM – FC Bayern - 84 Rated: After signing manager Nagelsmann and defender Upamecano from Leipzig, FC Bayern completed the hat-trick and also signed Austrian international Marcel Sabitzer for a rumored fee of 16m, which is quite a bargain if you look at his stats from last season. Sabitzer is a really good footballer and also not needs a long acclimatisation period which could be key for Bayern when they trying to win at least the double again this season.