Published on by Aarong222 22 Comments 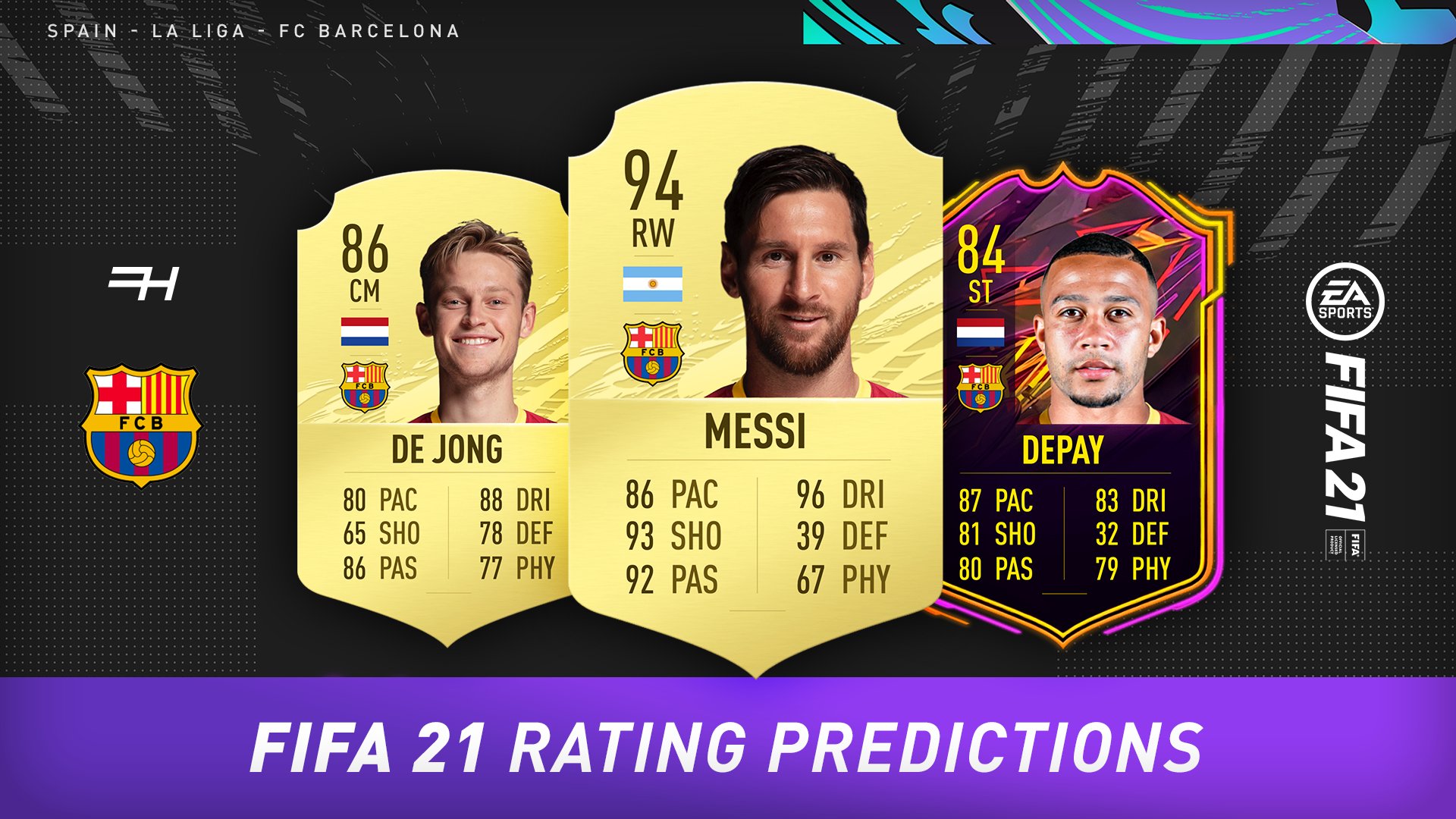 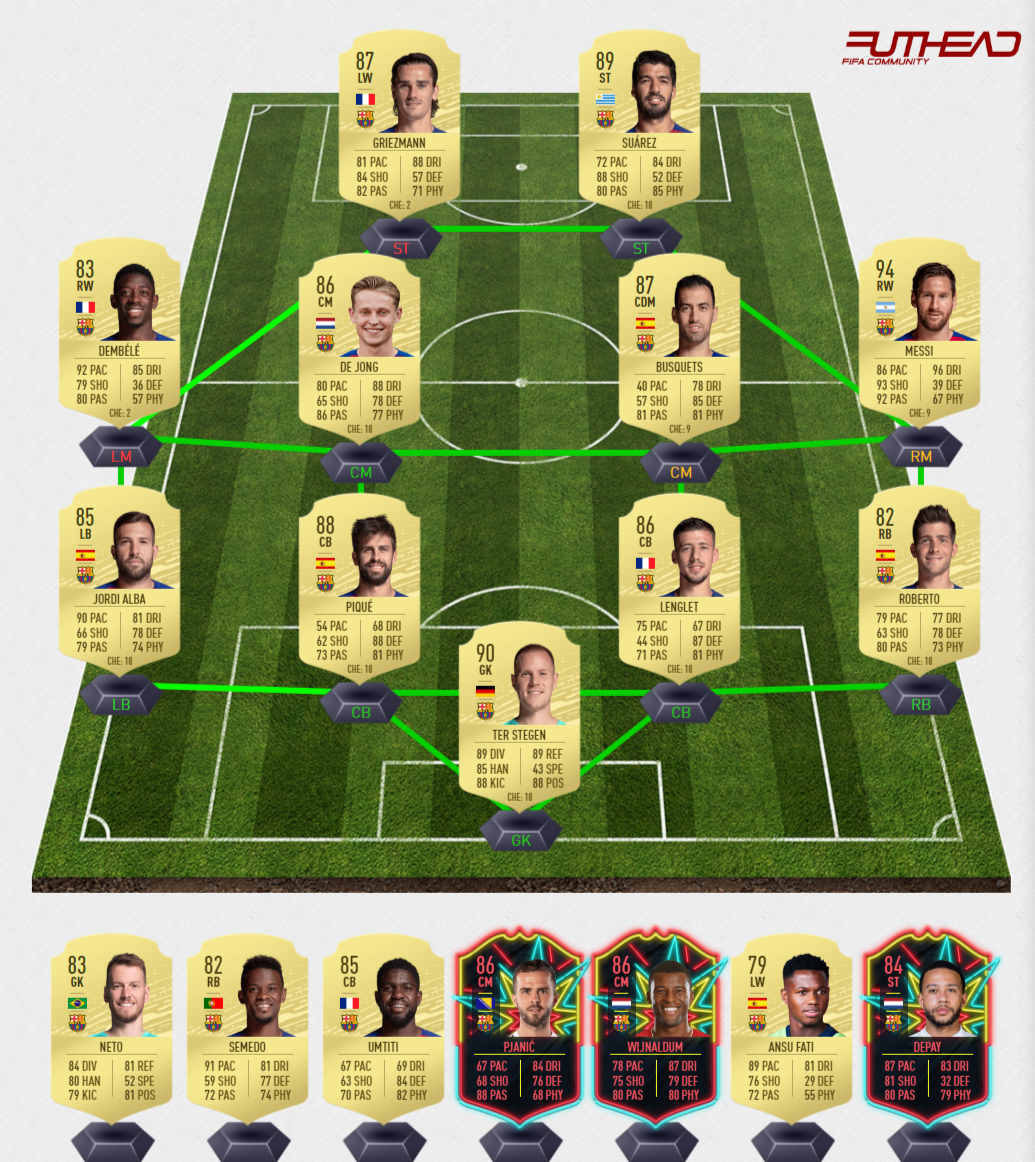 Marc-Andre Ter Stegen - GK - OVR 90 -> 90 Although Barcelona failed to win the La Liga title and crashed out of the Champions League in remarkable fashion there season as a whole although disappointing was not tragic. So while I wouldn't expect upgrades left right and center like some other clubs I wouldn't expect them to go the other way either. Ter Stegen is already a very high rating in FIFA so although you could argue a downgrade I still feel that he has done enough to warrant the high rating he has and thus have decided to keep him at 90 for another year.

Jordi Alba - LB - OVR 87 -> 85 One player who I do expect to pick up a downgrade however is Jordi Alba. The Spaniard has been recognised as one of the best LB's in the world for quite some time now but with the emergence of the likes of Robertson and Davies this past year I don't feel that he deserves to be as high as 87 and thus to reflect other ratings I have gone with 85 instead.

Pique - CB - OVR 88 -> 88 Pique was still very strong last season but with financial problems coming Barcelona's way there is talk of him returning to the Premier League. As it stands he is still a Barcelona player though and as long as that remains the case I can see him holding onto his rating for at least one more season. Especially considering he found himself featuring in TOTSSF.

Clement Lenglet - CB - OVR 85 -> 86 Lenglet looks set to be at the heart of Barca's defence for quite some time after an impressive season at the back for them. Since joining from Sevilla his level has continuously improved and I feel as though it will continue to do so with his current progress. 85 is already a respectable rating so there is not much room for maneuver but an 86 seems more than fair to me.

Sergi Roberto - RB - OVR 82 -> 82 I played with the idea of giving Roberto a small upgrade to an 83 rated RB but in the end opted to instead keep him as an 82 rating. The fans are not too fond of him and its safe to say that he is one of the weak links in the squad. That being said he did manage to keep Semedo out of the side which shows that the management have faith in him.

Lionel Messi - RW - OVR 94 -> 94 It is seriously difficult to maintain a rating as high as Messi but the 33 year-old Argentine looks set to manage it after another brilliant season for Barcelona. There was talk of him parting ways with them this summer but it now looks as though he will be staying with them. With an impressive 31 goals and 26 assists to his name during the 2019/20 campaign I can't see EA deciding to downgrade him and thus 94 is where he will likely remain.

Frenkie De Jong - CM - OVR 85 -> 86 After that magnificent season at Ajax for De Jong the Dutchman has settled in well to life with Barcelona developing into one of their main players this past season. With an inclusion in the La Liga TOTSSF it shows how important he has been to them as a whole despite perhaps not contributing as much offensively as he would have liked. I do see a small upgrade coming his way though with a plus one to 86 being my prediction.

Sergio Busquets - CDM - OVR 89 -> 87 Everyone knows how underrated Busquets is but when it comes to FIFA ratings thats not exactly the case. In terms of his performances the past year I feel as though he currently sits too high and with Barcelona failing to impress in the CL and missing out to Madrid in the league it looks as though Busquets will be getting downgraded.

Ousmane Dembele - RW - OVR 84 -> 83 Unfortunately Dembele's progress was halted due to a long term injury during the 2019/20 campaign and as a result I am anticipating a small decrease in rating for the coming year. Hopefully his luck will turn around though as there were promising signs from him previous to that.

Antoine Griezmann - LW - OVR 89 -> 87 The irony of this change is that should Griezmann end up staying at Barcelona there is a good chance that they will use him as a forward rather than the wide position he played most his games in last season. It was clear to see that he was not suited to that position and as a result failed to impress after his high profile move. I do think that after Suarez leaves the club there is a good chance that we will see the real Griezmann again though.

Luis Suarez - ST - OVR 89 -> 89 Although Suarez looks as good as gone in terms of his Barcelona days I have decided to include him in the prediction as there are no other big strikers currently in the club, at least out and out and as it stands he is still contracted with Barca. Suarez scored 21 goals for Barcelona last season which is still an impressive tally but it looks as though the decision to let him go is financially related. I feel that his level is still very high despite his age.

Neto - GK - OVR 85 -> 83 We all know that Neto is a very talented keeper from his time at Valencia but making the move to Barcelona was perhaps the wrong one for him with gametime being severley limited as a result. The Brazilian has managed just six appearances in all competitions for them and those sort of minutes will not help in maintaining an 85 rating and thus a drop is imminent.

Nelson Semedo - RB - OVR 82 -> 82 Semedo often finds himself sharing the gametime alongside Roberto with neither playing making the position solely their own. I think that an 82 rating is already a fair one and thus much like Roberto I feel that he will be remaining at it.

Samuel Umtiti - CB - OVR 86 -> 85 The main reason behind Umtit's small downgrade is the fact he didn't feature in many games last season. With just 13 appearances in La Liga for the Frenchman. Obviously 86 is a high rating to upkeep as a CB and thus with those sort of minutes I don't feel that it justifies him staying that high and although a large reason for that is down to injury there was still periods from which he found himself on the bench.

Miralem Pjanic - CM - OVR 86 -> 86 When Barcelona are offloading players for financial reasons it is a tad surprising that they splashed out over 50 million on a player approaching the end of their career but Pjanic put pen to paper on a Barcelona deal. That being said Pjanic is a very good player so its obvious to see why they were interested in him. After four strong seasons at Juventus he has decided it is time for a new challenge with Barca.

Georginio Wijnaldum - CM - OVR 84 -> 86 I had already given my views on Wijnaldum and his rating in the Liverpool rating prediction but the Dutchman is now heavily linked with a move away after Barcelona declared interest in him. If anything this only improves his chances of getting a plus 2 on his overall with a big name transfer coming his way.

Ansu Fati - LW - OVR 73 -> 79 I don't want to go too crazy on Fati's rating especially considering he is just 17 years of age but the winger is already showing signs that he is going to be among the worlds best in years to come. After featuring on a regular basis for Barcelona this season and breaking records with Spain internationally. I feel as though 2020/21 will be a huge year for him and thus the bigger upgrade could come ready for FIFA 22 or even as a winter upgrade.

Memphis Depay- ST - OVR 84 -> 84 Depay actually spent a large period of last campaign injured but when he was available his ability was clear, helping Lyon in their Champions League run and offering a strong threat in the final third of the pitch. Barcelona have declared their interest in the forward as a potential replacement for the likely outgoing Suarez and with a hat trick in this first game this season for Lyon the interest is likely to keep going. His rating however is unlikely to move due to the small amount of games he managed.