Published on by Aarong222 56 Comments Updated on 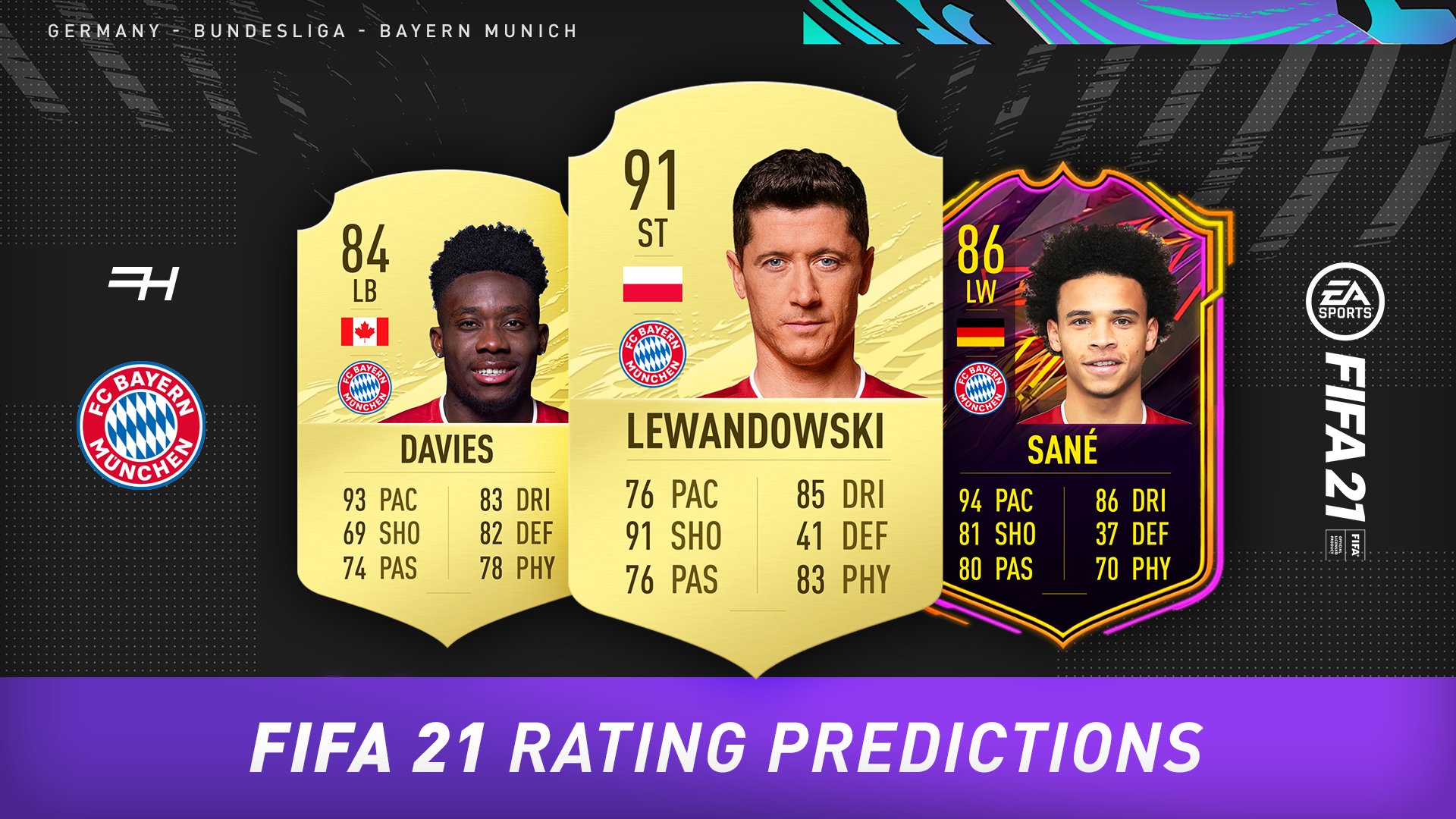 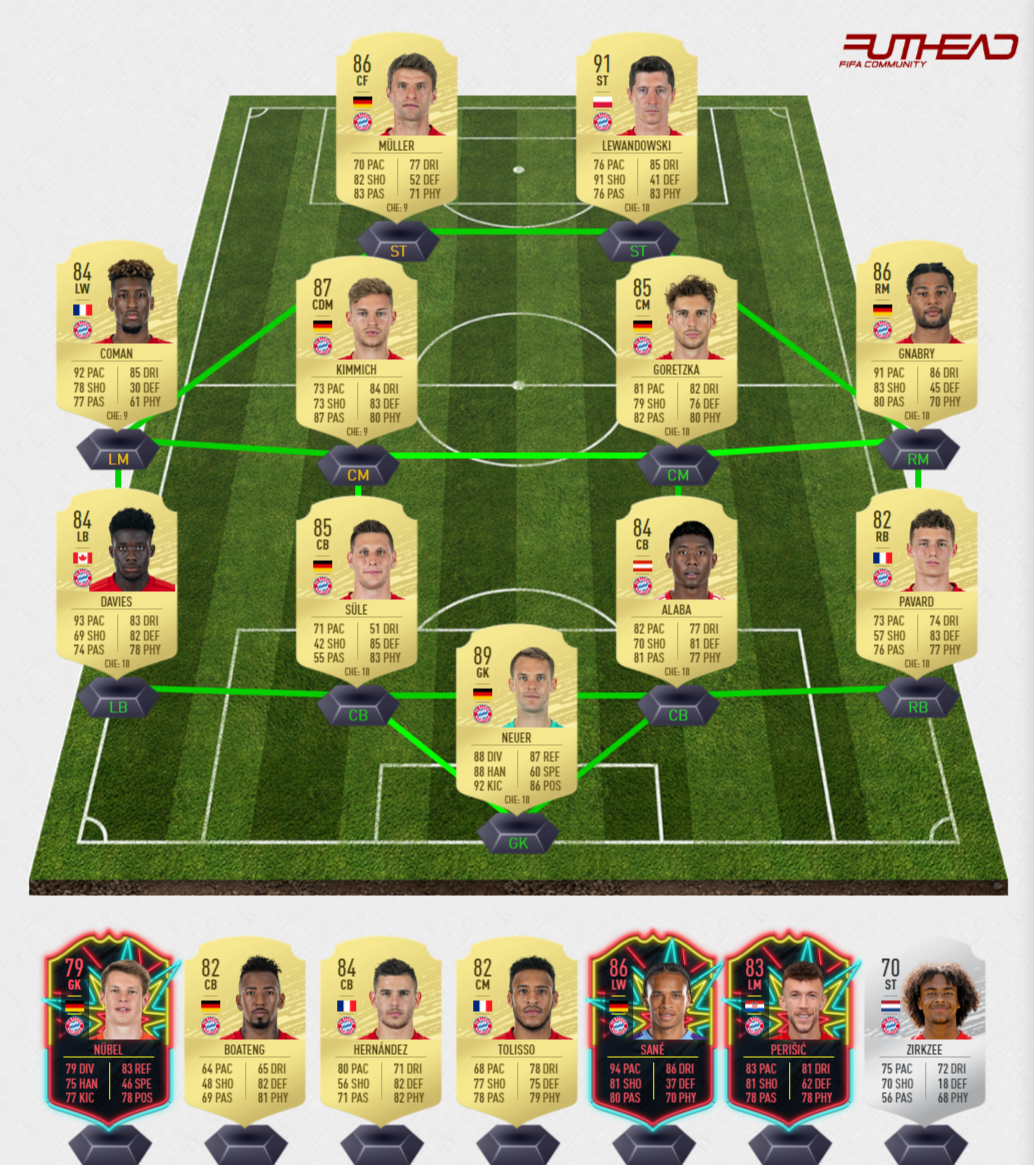 Manuel Neuer - GK - OVR 88 ->89 After a couple of seasons of injury struggles for Neuer he was finally able to get a full season under his belt. It was a relief for both himself and Munich who managed a fantastic defensive record with him back between the sticks. Obviously 88 is already a high rating for a keeper but with him dropping for consecutive years previous to FIFA 21 I can see him regaining one of those he lost.

Alphonso Davies - LB - OVR 72 -> 84 One of the bigger upgrades this year is inevitably going to go the way of Davies. Although the Canadian is still young many are already classing him as the best LB in the world. There is obvious reasons for that title and he will likely go on to be the best LB we have seen in a long time. Im not sure how full out EA will go on his rating but I do think that 84 is more than deserved already.

David Alaba - CB - OVR 85 -> 84 A downgrade on Alaba will be classed as controversial but the main reason behind it is the positional change. His stats don't suit the FIFA version on CB as much as they do for LB and as a result a downgrade is likely for the Austrian despite having a respectable season for them. That being said EA could completely overhaul his stats but as it stands I can see an 84 being more likely.

Niklas Sule - CB - OVR 85 -> 85 Sule was unfortunate during the 2019/20 campaign with several knee problems limiting his gametime significantly. He is still young though and has proven himself at the top level and due to that I am hesitant on giving him a downgrade. He will need to show signs of that 2018/19 season once back to maintain his rating for FIFA 22 though.

Benjamin Pavard - RB - OVR 79 -> 82 Pavard got a lot of stick from Munich fans while playing in a CB role but since they have moved him out to the right hand side his performances have significantly increased. So much so that I can see a nice upgrade coming his way, going from a 79 to an 82. The Frenchman is still young and can easily improve his level further in the future.

Kingsley Coman - LW - OVR 84 ->84 Its going to be a difficult year for Coman with Sane likely to take his place in the side for the 2020/21 campaign but in truth the Frenchman has been one of the more quiet attacking players in the Munich side registering significantly less attacking contributions than others in the area. That being said he has not had a bad season by any means, scoring the winning goal in the champions league final speaks for itself. I don't feel that he has done enough for a rating increase though and thus he stays at 84 for me.

Leon Goretzka - CM - OVR 84 -> 85 Since moving to Munich from Schalke Goretzka has been fantastic for them, managing to hold down a role in the middle for the past two seasons and continuing his recent trend I expect another +1 to occur going into the new FIFA. With Munich winning both league and European competitions it will likely increase the majority of the players in a Goretzka type situation.

Joshua Kimmich - CDM - OVR 86 -> 87 At one stage Kimmich was heavily in the running for a position at RB in the world eleven but in a Lahm esq move Munich opted to play him as a CDM soon after. The German now occupies both at a high level dependant on where he is needed but the majority of his matches come as a CDM. He is already highly rated with an 86 overall but I'm confident we will get a further increase on that.

Serge Gnabry - RM - OVR 84 -> 86 Since leaving the Premier League Gnabry has made a serious name for himself and performances this season, particularly during the champions league have only increased the reputation he now possesses. Domestically perhaps have not been as prolific as that of the champions league performances but he has still been fantastic there scoring twelve and assisting eleven from the wing. Perhaps a plus 2 is ambitious but there will definitely be an upgrade.

Robert Lewandowski - ST - OVR 89 -> 91 Lewandowski has been nothing short of phenomenal this past year and should the Ballon D'or still have run he would have had a serious chance of lifting the award. That is after the Polish striker managed 55 goals from 47 matches during the 2019/20 campaign. Helping Munich lift titles in Germany as well as Europe. Many were surprised including myself to see him downgraded last season but surely he must go the other way this time around.

Thomas Muller - CF - OVR 86 ->86 Although Muller can easily be classed as a CAM or a CF I believe that due to his role it should be the latter. As for his rating I am expecting it to maintain rather than increase with the majority of his teammates. The German still plays a big role in Munich's side but in terms of his overall level I do feel that it is starting to tail off. I don't believe that its at a level which we can expect downgrades just yet though.

Alexander Nubel - GK - OVR 75 -> 79 Although Nubel falls under a new signing for Munich this season it is unlikely that he actually picks up a OTW item with better options being prefered by EA. The 23 year old made the move from Schalke this summer to replace Ulreich of whom has confirmed he will be looking for a new club this summer. It was a decent season for Nubel though who will be hoping he can impress enough to take Neuer role once it becomes available.

Lucas Hernandez - CB - OVR 84 -> 84 Hernandez has struggled for regular gametime since joining Munich from Atletico with the German champions playing him in both CB and LB roles on an irregular basis. He is still young though and will likely get his chance with him being a very talented defender. As for rating its very unlikely that we will see an upgrade come his way and in truth I am probably being ambitious when I say he will keep his current 84.

Jerome Boateng - CB - OVR 84 -> 82 One of the only players I have actually decreasing in rating for Munich is Boateng. The German has been in decline for quite some time now and I wouldn't be surprised to see him replaced from the side in the upcoming season. Quite the change from his 90 rated base item in FIFA 17!

Corentin Tolisso - CM - OVR 83 -> 82 Onto another downgrade now with Tolisso, the Frenchman has struggled for gametime with Munich this year and has fallen down the pecking order as a result. With Tolisso not being a rising talent so to speak I think it will be difficult for him to break back into the side and thus I expect a downgrade to come his way.

Ivan Perisic - LM - OVR 84 -> 83 Although Perisic has been playing for Munich the past year now it would still technically go down as a new signing and thus a OTW item is possible for him. Munich are in talks with Inter over a permanent deal for the Croatian after his season on loan for them. That being said its likely that Perisic would be playing second string for them so it's still up in the air about whether it will happen or not.

Leroy Sane - LW - OVR 86 -> 86 Had Sane have remained at City I probably would have ended up giving the German a small downgrade but I feel as though the move to Munich has actually saved him there. His gametime has been limited under City at times but is talent is not under debate and I expect him to work superbly in the Munich team next season making him one of the more desirable OTW items.

Joshua Zirkee - ST - OVR 62 -> 70 With the gametime Zirkee picked up towards the end of the season i would expect the Dutch talent to get a decent-sized upgrade coming into the new game. Obviously it's not going to be a crazy one with him still being a prospect after all but somewhere in the range of 70 seems realistic while we wait and see what Bayern's plans with him are.