Published on by Aarong222 136 Comments Updated on 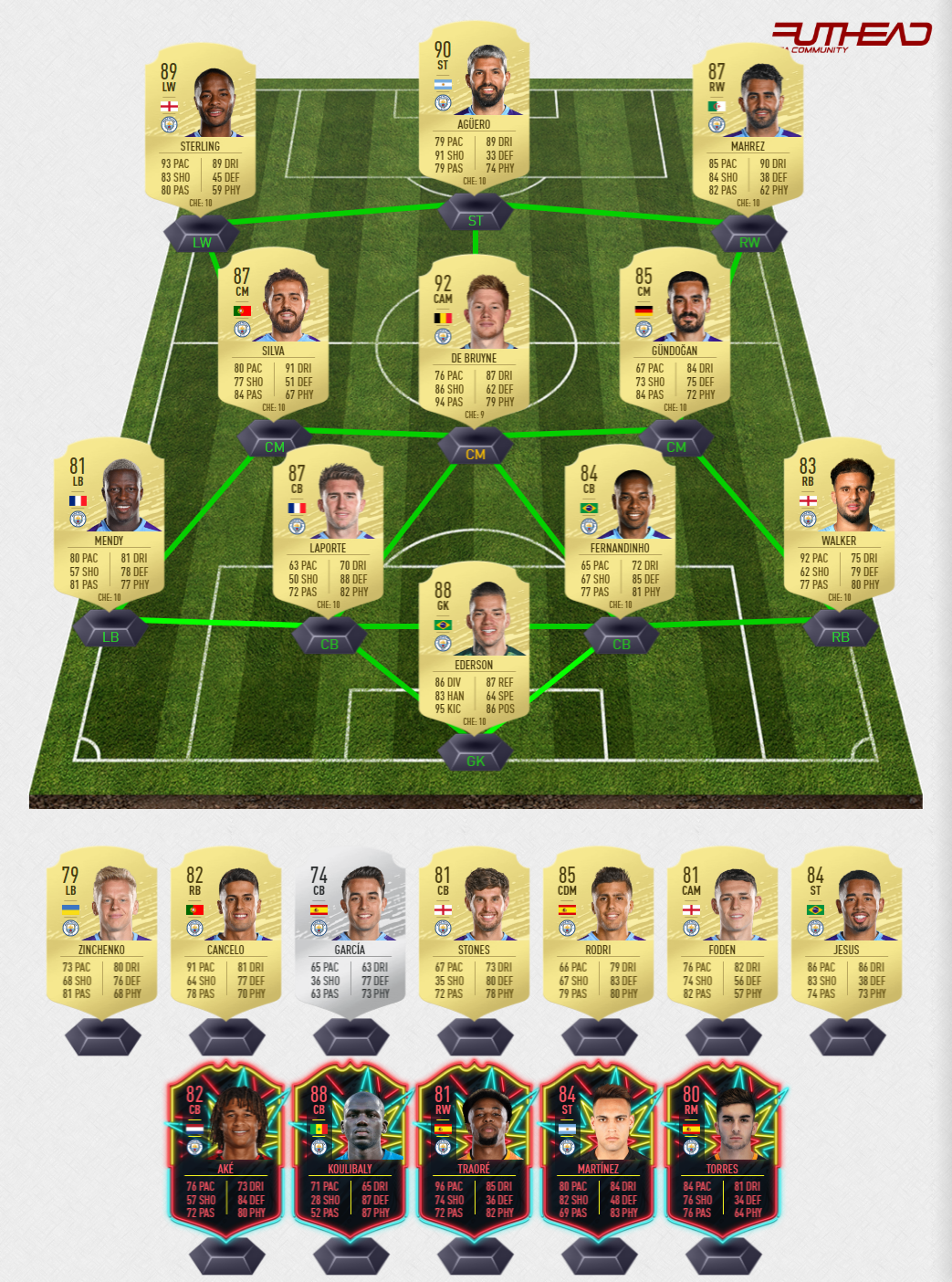 Ederson - GK - OVR 88 -> 88 When it comes to keepers like Ederson I feel as though movement in their ratings are hard to justify. The Brazilian was strong between the sticks once again this season but I dont feel that he has done enough for an upgrade. 88 already puts him with the best keepers in the world and I would say that his rating is more than fair.

Benjamin Mendy - LB - OVR 80 -> 81 Annoyingly Mendy still had some issues with injuries however he did manage to play half of City's possible league matches. He didn't quite look at his best but the signs were promising. City fans will be hoping that he can finally stay fit for a prolonged period of time as when he does he is likely to excel.

Fernandinho - CB - OVR 87 -> 84 Although a -3 may seem harsh for Fernandinho it is largely down to his positional change. I dont feel as though the Brazilian is as competent as a CB as he has been at CDM for CIty with a fair few errors coming from him and his height not exactly complimenting the situation. That being said I don't feel that EA will kill his rating much more than I have suggested here.

Aymeric Laporte - CB - OVR 87 -> 87 Laporte is a very talented defender but was unfortunately limited on gametime due to injuries this season. That being said when he was able to play there was an increased level of performance for the City defence overall. Due to this I don't feel the need to downgrade Laporte but instead I feel that 87 will remain for him.

Kyle Walker - RB - OVR 84 -> 83 Walker is approaching the final years of his career and it is starting to show signs of weakness in his game with pace always being a big factor of his game. I dont think that much will happen in terms of his rating but I think he was lucky to stay as an 84 last season and I doubt he will be lucky again for 21.

Raheem Sterling - LW - OVR 88 -> 89 Sterling recorded an impressive 20 goals for City last season so although 88 is already a very high rating I am still predicting him to increase by one to 89. The main reason for that being an anticipated shooting upgrade with the winger currently only obtaining a 79 base shooting stat. Most will agree that that is too low.

Kevin De Bruyne - CAM - OVR 91 -> 92 De Bruyne has been lighting up the Prem for a few seasons now and many have him down as the best Premier League player currently playing and its easy to see why with how much he influences games on a weekly basis. 91 is obviously a very high rating but with the likes of Ronaldo and Messi being higher I am confident that we can see him creep up by one more.

Bernardo Silva - CM - OVR 87 -> 87 The biggest question surrounding Silva is probably that of his final position with the Portuguese international playing in various positions over the course of the season. With 20 of his matches seeing Silva play either CAM or CM though I am leaning towards the central option. As for rating I can see him maintaining the 87 he is currently at.

Ilkay Gundogan - CM - OVR 84 -> 85 When you consider just how much Pep likes to rotate, especially outside of his main few players Gundogan actually featured quite a lot this season, especially when it came to the champions league. The German plays a good role for them and is perhaps underrated due to those around him. I don't think that 84 is too far off the mark but a small upgrade is reflective of his ability.

Riyad Mahrez - RW - OVR 84 -> 87 Since making the move from Leicester to Man City we had not seen Mahrez performing to the standard that we knew he could on a regular basis. The Algerian was fantastic during the 2019/20 season though developing into one of City's best performers over the second half of the season. I fully expect a strong upgrade for him going into FIFA 21.

Sergio Aguero - ST - OVR 89 -> 90 I have no idea how Aguero was not bumped to 90 last season but surely the Argentine will hit it this time around. Granted he was limited on gametime to an extent with pep's rotation policy being a killer at times but the striker regularly scores big goals and has been arguably the best striker in the Prem for a few years now. He easily deserves the 90 rating.

Oleksandr Zinchenko - LB - OVR 78 -> 79 Zinchenko has looked promising at times for City during the past year but his gametime has still been limited. With the Ukrainian now getting to the point where he would want to play on a regular basis there is a chance that he will leave City but as it stands I do think he will be there next year. As for rating I don't think it will change much here but a small upgrade is possible.

Joao Cancelo - RB - OVR 84 -> 82 Cancelo has failed to make the impact which many had hoped he would after his impressive season at Juventus. There are now talks of the defender departing from City's ranks after just one season and a downgrade is practically inevitable. I dont want to seem too harsh on Cancelo as there is still time for him to settle in but as a RB 84 is a high rating and one which he didn't replicate from the 2019/20 season.

John Stones - CB - OVR 83 -> 81 Stones has managed to pick up upgrades from the past couple of seasons but it looks as though he will be going the other way this time around with the City defenders gametime being limited and then while he was on the pitch he made several high profile errors. I feel as though he will struggle to get back into the City side now and as a result his rating will drop.

Eric Garcia - CB - OVR 66 -> 74 Garcia was awarded a string of chances in the first team for City towards the end of the season and his future looks promising for them. I dont want to go too crazy on his rating as he still only has a handful of fixtures to his name and is still just 19 years of age. There is potential of a low rated gold but instead I am opting for a strong silver.

Rodri - CDM - OVR 85 Rodri's first season at City has been a strong one with the Spaniard settling in as a first team regular. The 85 rating he received last season was perhaps a tad premature but EA looked to have it spot on and as a result I am expecting Rodri to remain at the 85 rating he currently obtains.

Phil Foden - CAM - OVR 76 -> 81 With Foden only coming into the limelight late on in the season I am not going to go crazy on his rating however a winter upgrade will likely occur should he keep his form going into the 2020/21 campaign. 81 seems to be a safe range for him going into the new year though. He is only going to rise from this point onwards though hopefully.

Gabriel Jesus - ST - OVR 82 -> 84 Jesus is in the unfortunate situation of being often kept out of the side by one of the best strikers in the world with Aguero. The Brazilian has been handed several chances this past season though and has repaid the faith with 14 goals and seven assists. Should he manage to break into the side on a week in week out basis I am confident that he would reach the high 80's so an increase the 84 is more than realistic off recent performances.

Nathan Ake - CB - OVR 80 -> 82 Ake has looked good for the past couple of years for Bournemouth and with the Cherries getting relegated in the 2019/20 campaign City took the punt and signed him for roughly 40 million. The Dutchman is likely to get an upgrade with the high profile move but I cant see him going too much higher in truth.

Kalidou Koulibaly - CB - OVR 89 -> 88 I had previously featured Koulibaly in my Liverpool rating predictions but a few weeks on and its rivals Man City who are now heavily linked with the defender and with their financial backing it is probably more likely to happen. The rating stays the same as previously predicted as 88.

Ferran Torres - RM - OVR 75 -> 80 Another confirmed transfer for City is Spanish youngster Torres. The 20 year old winger has impressed for Valencia and as a result confirmed a move to City for just over 20 million. The upgrade was always going to happen with or without the transfer but it will help him potentially go even higher.

Adama Traore - RW - OVR 77 -> 81 With Messi now confirming that he will be staying at Barcelona for at least another season City may look elsewhere to bolster their squad. One player they are linked with is Adama Traore who was superb at Wolves during the 2019/20 campaign. With Wolves admitting that they may have to sell the pacey Spaniard there will be multiple clubs monitoring the situation. City look to be one of the frontrunners for him and a decent sized upgrade should occur for him..

Lautaro Martinez - ST - OVR 84 -> 84 With Aguero approaching his final years of football his future at City is uncertain and as a result they are looking at potential long term replacements for him. Martinez is one of the stand out options with the Argentine excelling at Inter recently. He did pick up a hefty winter upgrade during FIFA 20 and thus I don't see much more movement for him entering the new edition of FIFA.