Published on by Aarong222 89 Comments Updated on 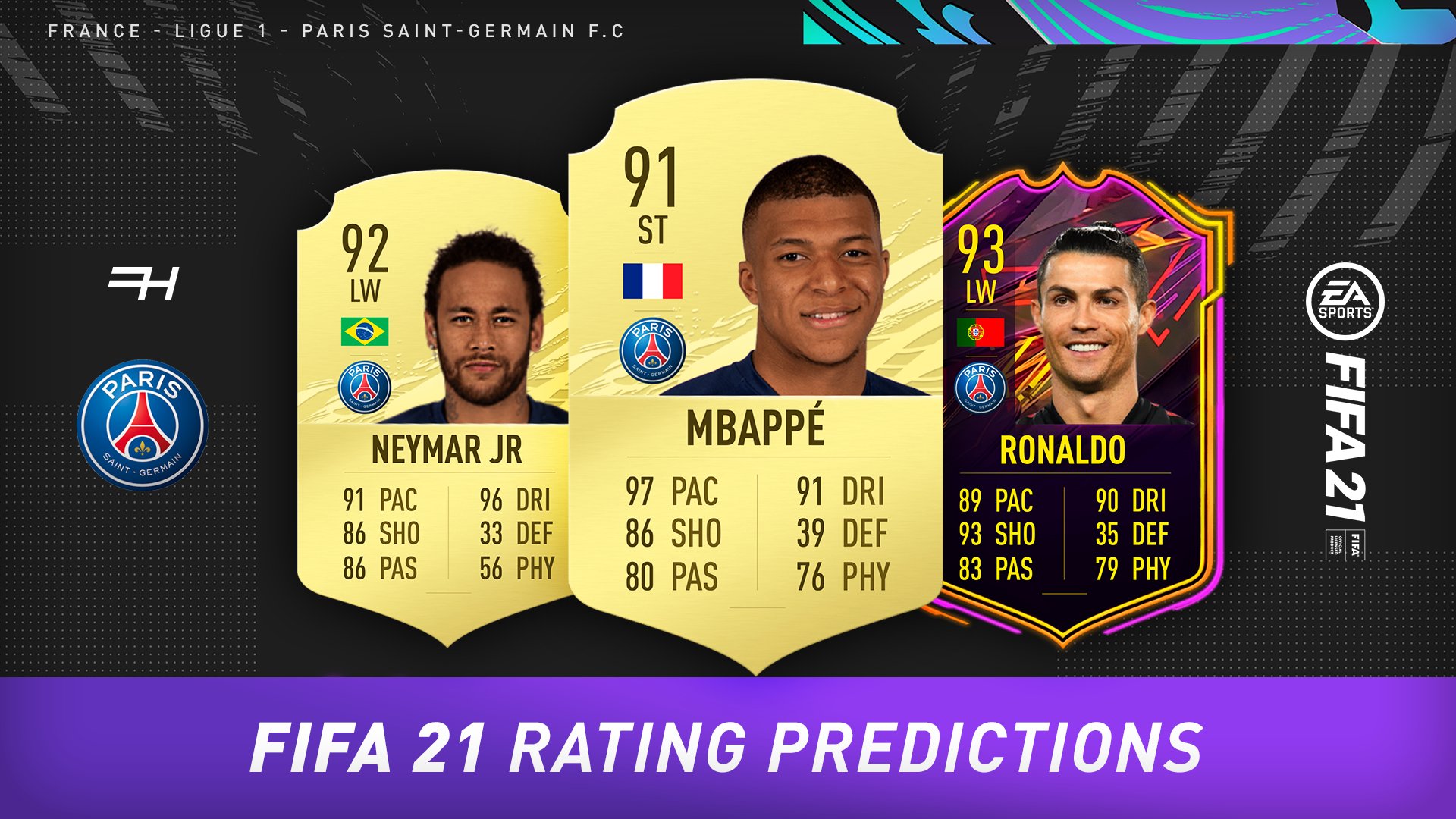 Keylor Navas - GK - OVR 87 -> 87 87 is already a very strong rating for a goalkeeper and thus I feel as though its unlikely that Navas will increase anymore. It was a pretty routine season for the Costa Rican, with not much going on, especially with the season being voided. That being said he is still known as one of the best keepers worldwide and thus I do expect him to keep his 87 rated item for 21.

Abdou Diallo - CB - OVR 79 -> 82 Diallo is one of the bigger upgrades which I am expecting from this PSG side with a plus 3 to 82 being my choice. After making the move from Dortmund last summer the Frenchman has played on a regular basis for the French champions and I expect his rating to show that for 21.

Presnel Kimpembe - CB - OVR 82 -> 82 Kimpembe has had his fair share of stick from the PSG fans, especially for his performances in the 2018/19 campaign but his potential is starting to shine through. I do feel that the 82 rating he was awarded for 20 was generous but at the same time I do feel that his current level is enough to justify the 82 rating for the upcoming edition of the game.

Marquinhos - CB - OVR 86 -> 86 Marquinhos has been in the shadow of his CB partner of Silva for many years with the fellow Brazilian being tipped to take his spot for quite some time now. It looks as though he is ready to step up with the past couple of seasons being strong for him. Although he now becomes PSG's main defensive option I can't see him creeping above the 86 mark just yet.

Neymar - LW - OVR 92 -> 92 Unfortunately I fully expect Neymar to be a LW rather than a CAM once again this FIFA and with a very similar item at that. The top rated players see very little movement in their ratings, especially while they remain at the top of their level and with EA wanting to reward Neymar with several special items over the course of FIFA 21, 92 seems like a good rating to be at.

Marco Verratti - CM - OVR 86 -> 87 Verratti has been the catalyst at the center of PSG's midfield for quite some time now with the Italian showing no signs of slowing down. I feel as though he is one of the most underrated midfielders in the current era and although I am only going with a plus 1 upgrade I do feel that he deserves more than that

Julian Draxler - CM - OVR 83 -> 82 While in the Bundesliga Draxler looked to be one of the best upcoming talents in the division but since moving to PSG his career has declined. I am expecting a third downgrade in just three years for him with the German potentially going down to 82 from his current 83. He managed just eleven games for PSG last season from which he was played in various positions as basically a squad rotation option.

Idrissa Gueye - CDM - OVR 83 -> 85 Gueye was always likely to do well after making his way to PSG from Everton, especially with the players around him but he excelled even what was expected of him, making a real contribution to PSG as a whole. He featured in Ligue 1 TOTSSF and broke up play after play for them. I fully expect to see him upgraded with the main question being how high?

Angel Di Maria - RW - OVR 86 -> 87 Di Maria actually received a downgrade last season but the Argentine has been superb since for PSG and was one of their top performing players before the stoppage of play. Its unusual for players of ADM's age to pick up an upgrade, especially after EA enter them into the decline stage but if anything this prediction shows just how good hes been.

Kylian Mbappe - ST - OVR 89 -> 91 This is a bold prediction but there are numerous reasons for it. When it comes to the best strikers in the world most will say the likes of Ronaldo, Suarez, Lewandowski and Mbappe and thus its only fair the represent that in the ratings. Mbappe is the youngest of that bunch by quite some distance and with the Frenchman scoring 18 goals in 20 matches last season EA opted to make him the cover player for FIFA 21. With that I expect him to be one of the highest rated players in the game and thus I have awarded him a +2.

Mauro Icardi - ST - OVR 85 -> 86 We were all aware of how good Icardi was after several impressive seasons with Inter Milan. The question was just how well he would fit into the PSG side. With 12 goals in 20 matches its safe to say that hes settled in quickly though and as a result I can see another small upgrade coming the Argentines way.

Sergio Rico - GK - OVR 77 -> 77 Not the most exciting of players to predict with the sub PSG goalkeeper not really getting a chance this season with the Spaniard never realistically going to dislodge the current option of Navas. 77 seem realistic and thus I fully expect a very similar item in 21.

Layvin Kurzawa - LB - OVR 77 -> 77 Kurzawa is not quite the player we once saw for PSG with the Frenchman playing second string for large parts of the season but he has put pen to paper on a new four year deal so PSG obviously still see value in him. As for his rating I doubt we will see much movement going into FIFA 21

Thilo Kehrer - CB - OVR 79 -> 79 Kehrer has been given limited opportunities for PSG so far, with the French champions often opted to deploy him in the RB role. Now that Silva has departed however I can see him getting some more minutes under his belt, which will tell us if he is ready or not. As for now I fully expect his rating to stay the same with him being unproven in reality.

Bernat - LB - OVR 80 -> 81 Bernat saw a huge plus 4 upgrade coming into FIFA 20 and although a similar occurrence is nigh on impossible I do expect to see him creep up once again, although just by one rating this time around. The LB continues to be PSG's go to in terms of wingback options with the Spaniard being the only familiar face in that position over the past few campaigns.

Pablo Sarabia - RW - OVR 83 -> 82 There was a lot of hype behind Sarabia's move from Sevilla to PSG but it never really kicked off in truth. The most disappointing part this season is that he is likely to be a RW item rather than a CAM. With that in mind I actually feel as though we will see a downgrade as his statistics dont really suit the position for FIFA.

Ander Herrera - CM - OVR 82 -> 81 To simply put it Herrera has been unable to break into the PSG side on a regular basis and as a result of that looks set for a small downgrade. I still believe that Herrera has the ability to play at the top level but while his gametime is limited the realistic outcome is always going to be a downgrade.

Leonardo Paredes - CDM - OVR 80 -> 80 Another pretty routine selection here with Paredes. The Argentine does a job for PSG but is always left in the dark by the other midfield options they have. That being said there is still a future for Paredes and I can't see EA dropping his rating just yet.

Emerson - RB - OVR 75 -> 79 Emerson is currently owned by Barcelona but spent last season on loan at Real Betis. His performances have picked up interest from a few clubs with Roma and PSG two of the bigger names. With PSG seemingly lacking in the defensive area, especially with Thiago Silva leaving I would expect a couple of signings in that area from them. Emerson offers a long term solution for them and with Barcelona seemingly willing to sell, the opportunity is there.

Sergej Milinkovic Savic - CM - OVR 85 -> 85 Milinkovic Savic was perhaps lucky to keep his 85 rating after his displays in 2019 but the Serbian had another successful season for Lazio during the 2019/20 campaign. Once again there is interest from across Europe but PSG look to be one of the frontrunners having already put in bids for the Serbian. As for his rating 85 seems to be a fair evaluation of him right now.

Matteo Guendouzi - CM - OVR 75 -> 79 Guendouzi's Arsenal career looks to be coming to an end with the Frenchman causing controversy several times this season but his display at Brighton was seemingly the final nail in the coffin for them. His talent howver in undeniable and with age I fully expect his maturity to show through and for him to develop into a world class midfielder. PSG and Barcelona are linked with the youngster but PSG seem the more likely to make a move. I can see a decent size upgrade coming his way regardless.

Joshua King - ST - OVR 79 -> 78 With Bournemouth going down this season it was always likely that a couple of their main players would part ways from them. King falls into that category with a flurry of clubs reportedly chasing him. PSG is one of those as they look to bolster their squad size. King would probably be a second string option, much like Choupo Moting has been but I'm sure he wouldnt mind being given the option to play for PSG.

Cristiano Ronaldo - LW - OVR 93 -> 93 One of the biggest transfers of the summer could see Ronaldo make his way over to France to join both Mbappe and Neymar at PSG. Reports suggest the forward's agent has already held talks with PSG after the Portuguese international was upset over Juventus's loss to Lyon in the Champions League. Ronaldo is desperate to get his hands on the CL and a move to PSG could give him another shot. Messi and Ronaldo are now close to being caught by the pack as they approach the final years of their careers and with a positional change I can see a small drop on Ronaldo's rating however should he secure a transfer away from Juventus he may just keep that 93 rating