Published on by smooks 20 Comments Updated on 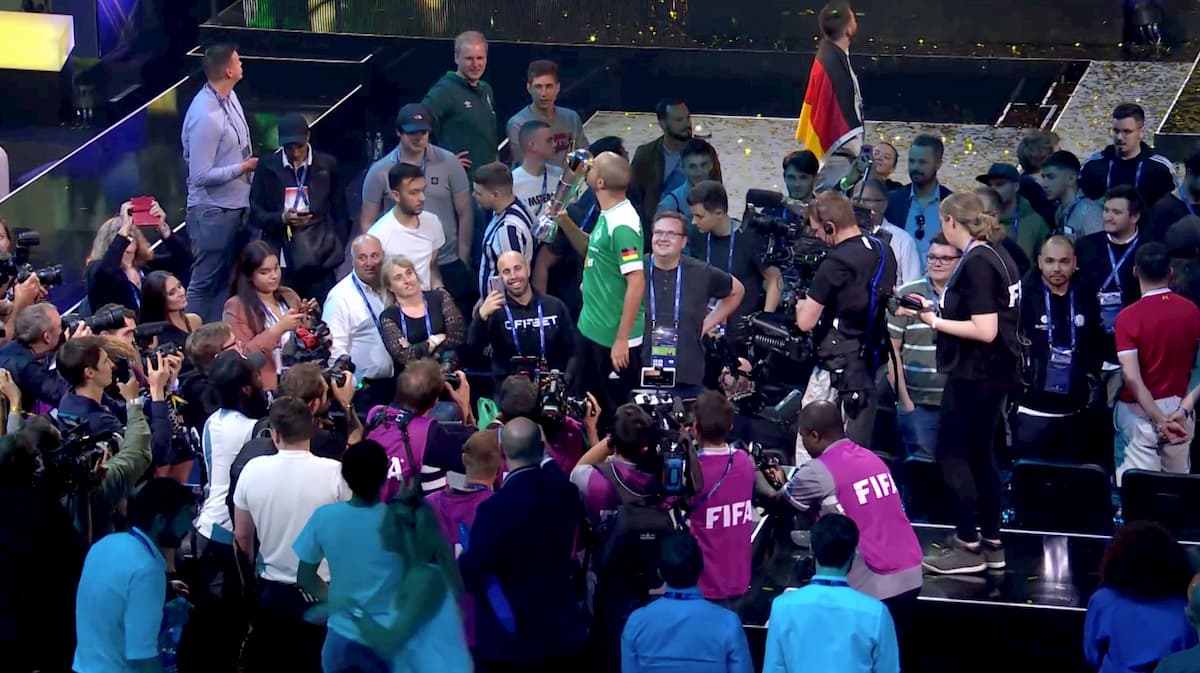 In the Grand Final, to everyone's surprise, it was MoAuba who took the 1-0 lead. Before the German could finish celebrating however, Dossary, widely considered to be the favorite in the entire tournament, let alone the final, had pegged him back. The two remained locked in a 1-1 stalemate through the second half, exchanging a few goal-scoring opportunites. Back on his home console in the second leg, the PlayStation champ had Dossary on the ropes within 20 minutes. The Werder player took a quickfire 2-0 lead that forced the Saudi Arabian to take an extended timeout with his coach, 2017 FIFA Interactive World Cup champ Spencer "Gorilla" Ealing.

Nursing a two-goal lead and with an away goal in hand, MoAuba mounted the pressure on the reigning champ as the game started to open up in the final 45 minutes. The German made darting runs into open space, but his attacking chances would fizzle out on the wing or at the edge of the box. A Kai Havertz header roughly 15 minutes from full-time reignited the tie, and suddenly it seemed like Dossary was back in it.

Defense reigned supreme, however, as Harkous fended off chance after chance. As luck would have it, the former world champ's first defeat this entire weekend would poetically come in the final matchup. The announcers read out Harkous' name as his fellow Germans celebrated: PlayStation had prevailed over Xbox.

Despite the grandiosity of the FeWC final, the most exciting tie of the day was undoubtedly MoAuba's nerve-wracking win over FC Basel's Nicolas "nicolas99fc" Villalba in the PlayStation final. After the first leg, the scoreline read 4-1 in favor of MoAuba. But an incredible three-goal rally culminated in a 93rd-minute Luka Modric header to force extra-time; and after two frantic 15-minute periods, the gameplay switched over to penalties.

The shootout itself was a cagey affair. With lots of saves early, the two players struggled to find their footing, either shooting right at their opposition keeper or shanking their shot entirely. During sudden death, fortune finally favored MoAuba as a finish down-the-middle closed the curtains on Nicolas' incredible tournament. The aggregate scoreline read 9-8.

On the Xbox side, Dossary and Vitality's Fouad "Rafsou" Fares featured in a similarly enticing matchup, though for once it paled in comparison to the PlayStation grand final. The first leg went to the Frenchman Rafsou, even though he only held a slim one-goal margin over Dossary. The Saudi Arabian would equalize ten minutes from halftime in the second leg, and follow it up with two more to effectively put the game to bed - the aggregate scoreline would swing from 2-1 in Fares' favor, to 4-2 in favor of Dossary in a span of 35 minutes. A 91st-minute consolation goal would make it 4-3 in the end.

With the conclusion of the FeWC and a momentous crowning achievement for Harkous, the formal FUT 19 cycle comes to a close. FIFA eSports will return this fall with FIFA 20.