Published on by smooks 5 Comments Updated on 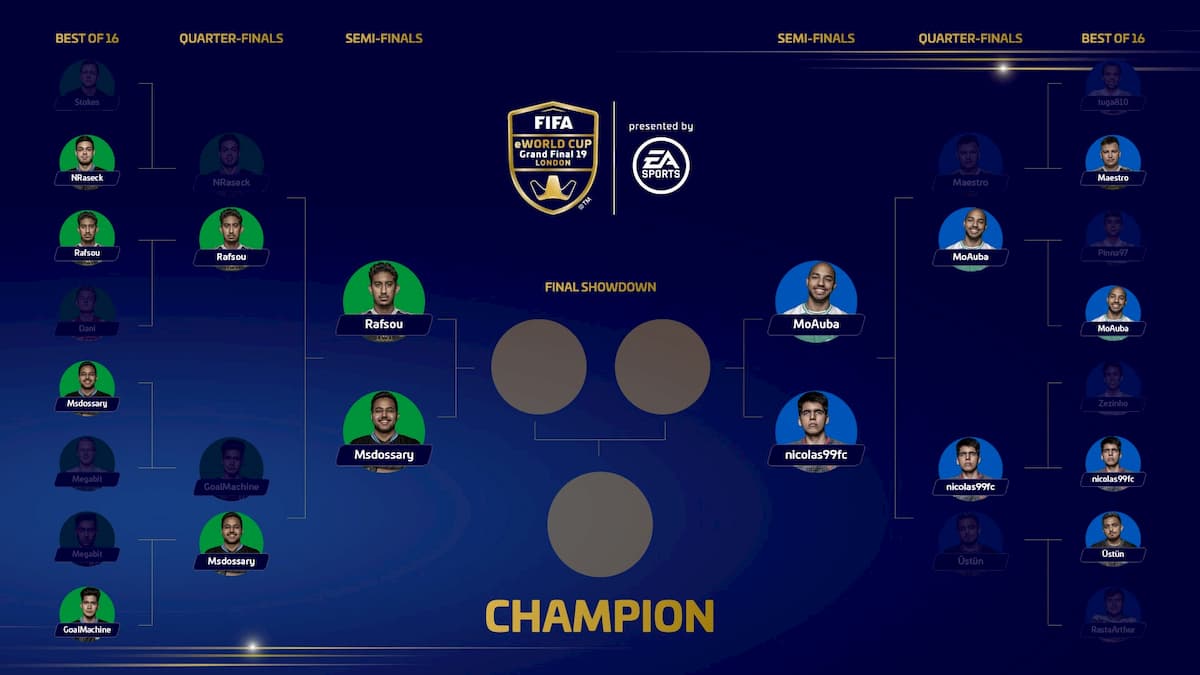 Msdossary, already the reigning champion, is playing the best FIFA of his career. The Saudi Arabian was the only player yesterday to post a perfect record in the group stages, and hasn't lost a single tie in the entire tournament. He will play Fares, a French veteran who has stayed relatively under the radar during the FUT 19 cycle. The Vitality player's best finish came in May 2018, when he reached the final of the FUT 19 Global Series Xbox playoffs, only to lose to Michael "Megabit" Bittner.

What's makes this tie even more enticing is the fact that Fares and Dossary have already played each other this weekend. The latter blanked Rafsou by a 6-0 margin Friday, so it'll be interesting to see if the added confidence boost of reaching the FeWC semi-final changes the aggregate scoreline.

On the flip side, Nicolas has turned his fortunes around after a nightmarish start on Friday. Despite being PlayStation's No. 1 seed by a long shot, Villalba lost his first three matches yesterday before somehow righting the ship. With an 0-3 record, the Argentine had to win all four of his remaining matchups to even qualify, which he did. And since then, he's looked a lot more like his regular self; in the Round of 16 and quarterfinals, Nicolas' goal differential of +13 was the highest among all competitors.

Villalba will play fan favorite MoAuba, a German whose FUT Champions finishes haven't always reflected his talent. However, it all seems to be coming together for the Werder Bremen man; after a marquee win over Stefano Pinna, Harkous downed Vitality's Corentin "Maestro" Thullier to reach the semi-finals.

Perhaps the biggest shock of the day came when Donovan "F2TeKkz" Hunt, the No. 1 player in the world coming in to the weekend, exited the tournament. After yesterday's shaky start, the four-time FUT 19 major champ had to win both of his games in order to ensure qualification to the knockouts. To his credit, TeKkz did fight a first-leg deficit to beat Rebel FC's Tom Stokes, the most recent Xbox champion, in the sixth round; but it was too little, too late.

In the final round, it was TeKkz who took the first-leg lead against Bittner. But the tightly-contested bout would end 3-1 to Megabit in the second leg, completing the comeback.

The Round of 16 was a bloodbath, given the amount of talent that had convened on one stage. Viewers saw players like Stefano Pinna, last year's runner-up, FaZe Tass, AFC Ajax's Dani Hagebeuk, Rebel Stokes and Megabit all bow out at the same time. Besides TeKkz, the other notable exits from the group stage included Paris Saint-Germain's Lucas "DaXe" Cuillerrier, recent PlayStation Playoffs runner-up Lev Vinken, and FUTWIZ's Mark 'Marko' Brijeski.

On Sunday, the 2019 FeWC Champion will be crowned. The day will kick off with the semi-final matchups, and will take a short break before reconvening for the grand finals. Coverage begins at 3 p.m. local time, and 10 a.m. ET in North and South America; the broadcast can be followed on Futhead’s home page or on the official EA SPORTS FIFA Twitch channel.