The best leagues and nations for your FIFA 18 starter team

Published on by FutEconomist 20 Comments Updated on 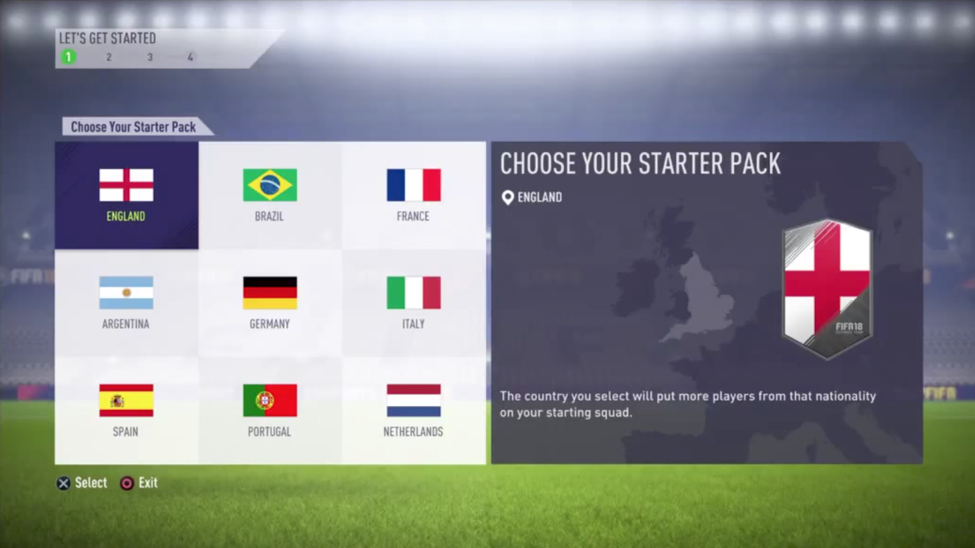 What is a “Starter Team”?

A starter team is created at the early stages of FUT. It is the first side that you’ll create on your Ultimate Team journey and often features cheap, lower rated players who have stats that leverage game mechanics (pace, strength, etc.) to take advantage of inexperienced defenders just getting used to the new game.

We've broken down and analyzed some of the most popular leagues and nations to base starter teams around. We'll look at their strengths and weaknesses by position and even their and projected value for money. But before we dive into the breakdown, let’s go over our methodology.

We have divided each of our breakdowns into five sections. The first four are by position; attack (ST, CF, LW/LM/LF, and RW/RM/RF), midfield (CAM, CM, and CDM), defense (CB, LB, and RB), and goalkeeper (GK).

In each of these sections, we give a “Starter Squad Strength” rating out of 10. To arrive at this rating, we went through each league/nation position by position looking to identify players that could slot into starter squads. We only considered players who will likely cost less than 3,000 coins in the first month (give or take a couple 1,000) to ensure that the hypothetical squad doesn’t cost anymore than 25k. We also considered the depth of the starter squad tier of players in our rating out of 10. The more high quality starter tier players, the higher the rating.

We also gave upgradability rankings. “Upgradability” is our term for the potential to upgrade your starter squad with mid/upper tier players from that league/nation. For example, La Liga has one of the highest upgradability ratings in the attack because of the likes of Ronaldo, Suarez, Messi, and many other solid mid-tier attackers.

We also assigned a “Value for $” rating out of 10. This took into consideration the overall starter tier strength of the different positions and the projected price of that team. A high value for $ rating indicates that you can buy players with good stats for cheap.

Also in the value breakdown is a section labeled “Investment Grade?”. Many of the players in these squads have the potential to rise during the first couple weeks of the game. We considered some of the factors at play in the early FUT market, which you can read about in our FIFA 18 Web App trading guide, and predicted if any of the cards in that hypothetical team have the potential to rise in price.

Finally, in the value breakdown is a label for “Hybrid Ability”. This rating out of 10 reflects our opinion on how easily one could make a hybrid team with multiple nations or leagues using this team as a base.

Now that we’ve explained our methodology, let’s start by ranking our Top 5 leagues and nations to base a starter squad around. This year, it will be especially important to consider because when you first load up Ultimate Team, you will be presented with the menu at the top of this article. It will ask you to choose a starter nation. Your selection will determine which nation is most populous in your starter packs. Obviously, you’ll want to choose a nation that will get you off to a strong start!

Do not sleep on the Italian league this year! Arguably the best starter league option, the Serie A boasts a diverse player pool that can fit any player's style. They have plenty of pace all around the pitch, and there is a nice balance between hidden gems and meta options which boosts the league's value for coins. There is also plenty of upgradability, so start getting familiar with 'Calcio A'. 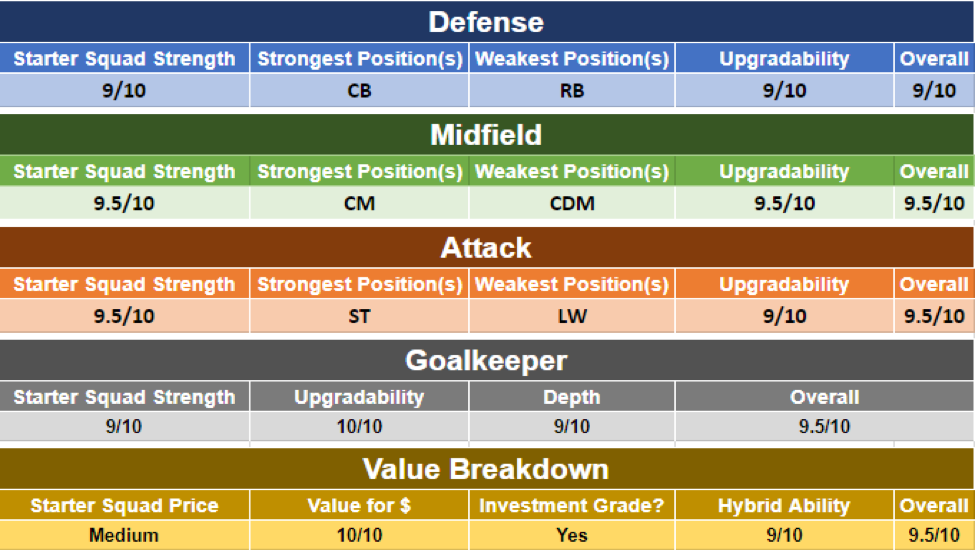 Although primarily known for its efficiency, the flair of Germany's top-flight should not be ignored. This league looks to be one of the best starter options. A slight lack of depth in the LB position is a con, but all other positions are a go! Plenty of options mean it should be easy to pick up some serious deals. Great hybrid ability and upgradeability means you’ll be seeing a lot of the Bundesliga. 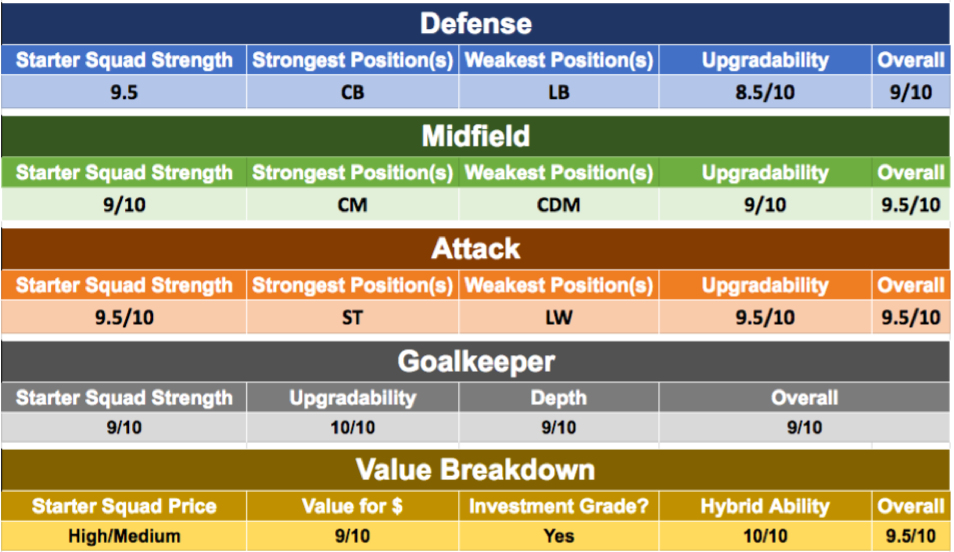 No doubt Spain is an elite team in international football, but can they cut it as a FUT starter team? This year, the answer is a resounding yes! All around the backline, one can find great stats (pace) for a good price. This also holds true for their attack. Their midfield is reliable, but they lack depth of gritty ball winners. Huge upgradability, easy hybrids, and solid value for your coins makes them an attractive option. 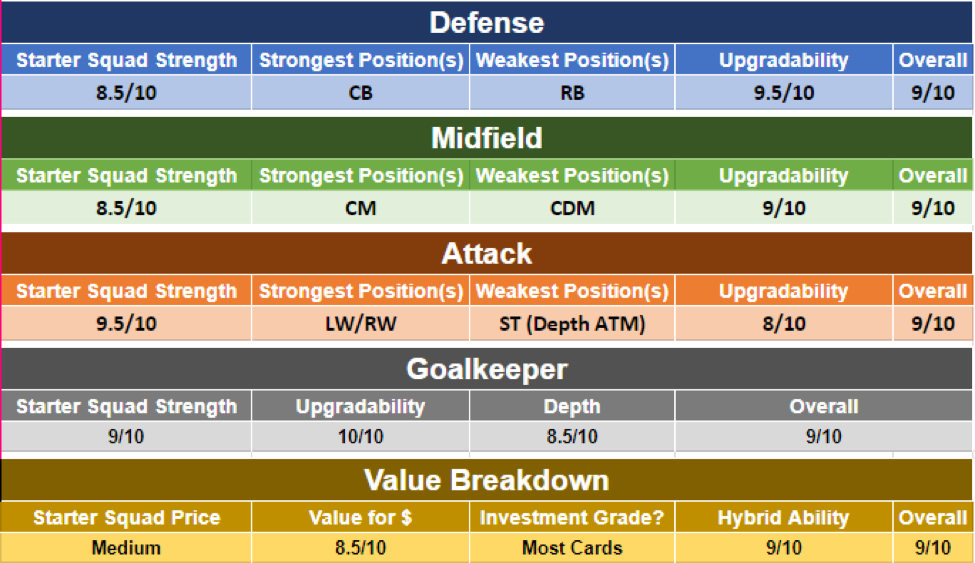 The Premier League is, without a doubt, the most popular league in FUT. It has depth and upgradability in virtually every position. This year, Premier League starter squads that focus on wing play with a pivot around a strong holding midfielder will excel. However, because of its popularity, prices will be high, pushing down the value for money. 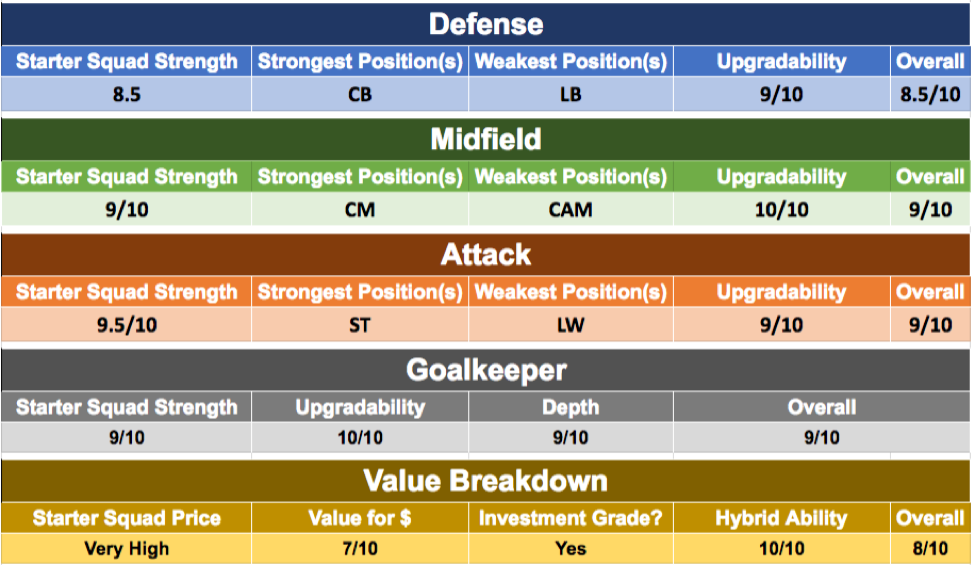 The reigning World Cup champs have undeniable talent on FUT 18. Their attacking options look to be stacked at every level, and a robust midfield at every price point. However, their CBs may be too good, putting them out of reach for many starter squad budgets. Regardless, the Germans make for an intriguing option. 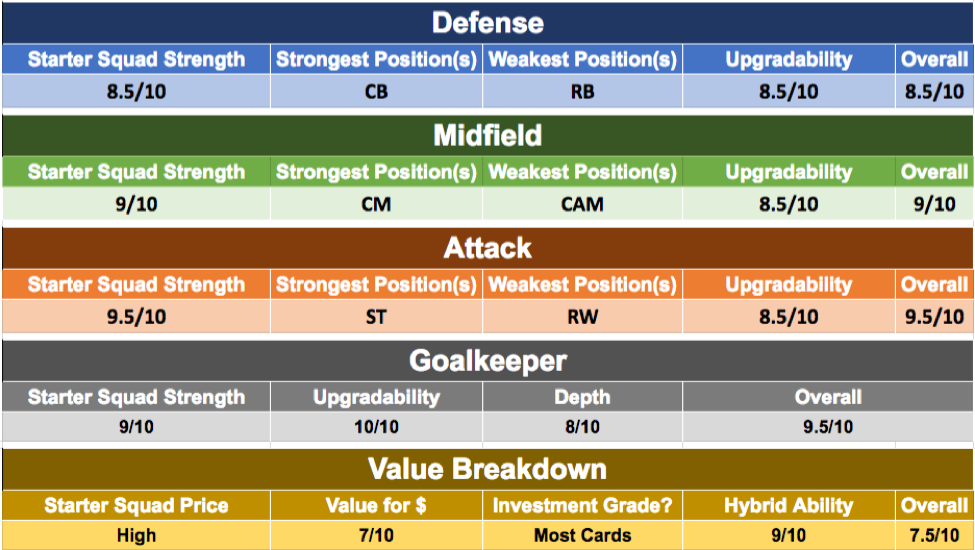 Although primarily known for its flair, the efficiency of France's top-flight should not be ignored. Previously thought of as a luxury league, there are plenty of possibilities for a starter squad. Another league that is held back by their full backs, Ligue 1 looks to make up that lost ground with a creative midfield and deadly attack. Don't be surprised if you see more France than ever before in FIFA 18. 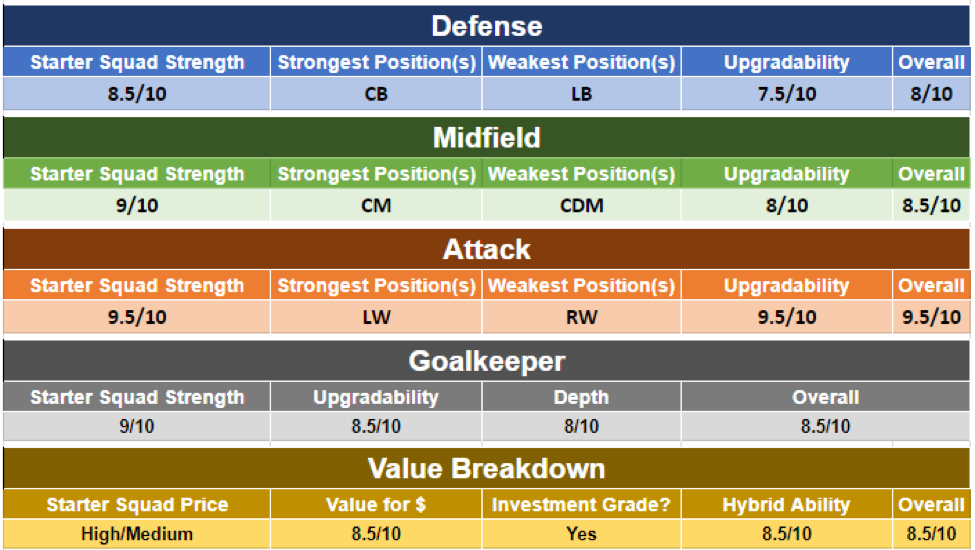 Last year, Argentine sides felt like they were missing an x-factor. But this year, interesting position changes and young bloods coming into their own, makes them a hot prospect for starter teams. They keep their deadly attack, and add a few defending options to support a reliable midfield. Also, wide disbursement of players makes hybrids easy. If you're looking to spice it up, give Los Gauchos a look. 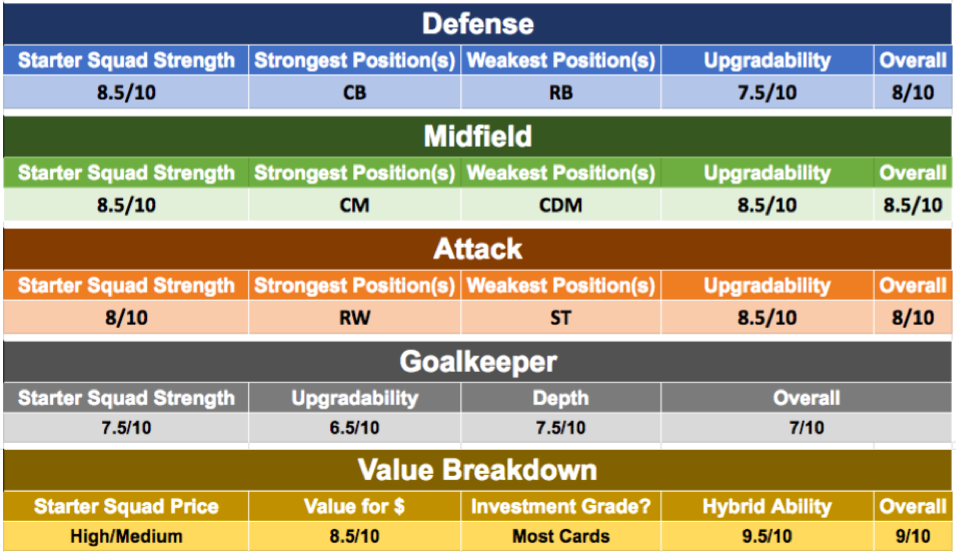 Now that we’ve gone through our favorite leagues and nations, let’s breakdown the rest of the list. We'll start with the other leagues that we looked at.

Despite recent growth in the league, the MLS remains a comparatively weak league to base your starter squad around. A lack of depth in key defensive areas will likely expose even the best defenders with this year's new crossing mechanics. While there are a number of solid options in select attacking positions, the lack of depth may lead to price premiums, pushing down the value for coins. 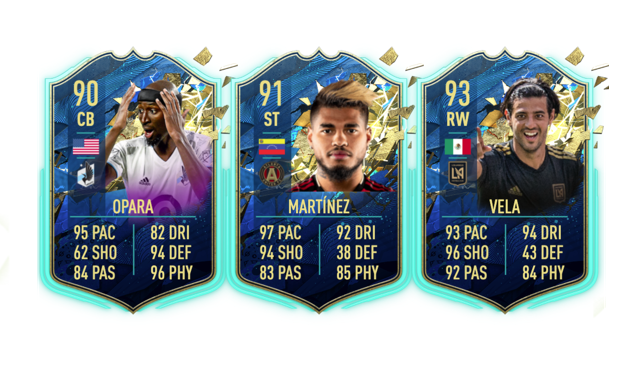 Players tend to shy away from making starter La Liga teams. The league lacks a solid core of mid-tier players leaving only the ultra expensive/competitive tier to work towards. Despite this, La Liga has an impressive line-up of starter squad depth. While, in terms of numbers, there are less than the other popular leagues such as the Premier League, the lack of mid-tier upgrades could scare enough players away to make value for your money high. 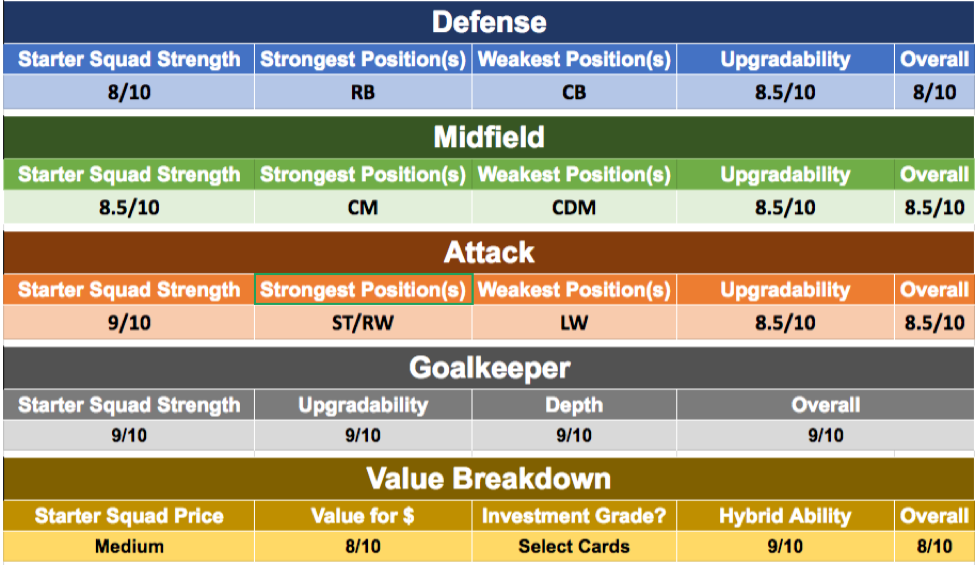 Last year, Liga NOS was a popular league to base starter squads around. Despite a number of transfers that weakened the defense, the league's upper tier of players are ideal for a starter team. Formations that take advantage of wing play will be best suited for this league. While upgradability is very low, value for coins should be exceptionally high. 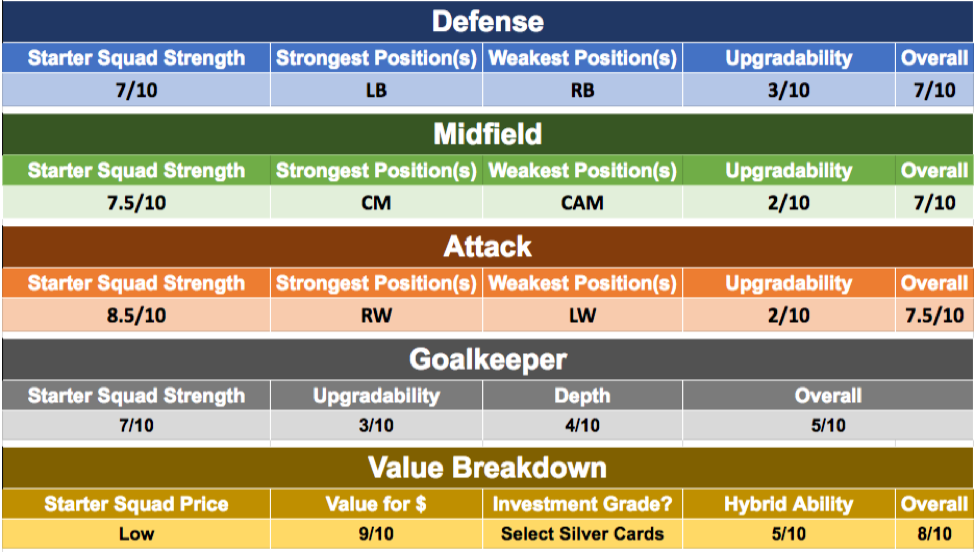 If you are looking for an attack heavy fitness/starter team, then the Russian league is the place for you. Plenty of well rounded attacking options and solid midfielders means you'll give your opponents headaches. In addition, while there is exception pace on the backline (you know who we are talking about), we question whether they will stay cheap. Elsewhere, reasonable prices will be a plus, yet exploitable flaws and a lack of depth causes this league to remain on the fringes of a Tier 1 starter league. 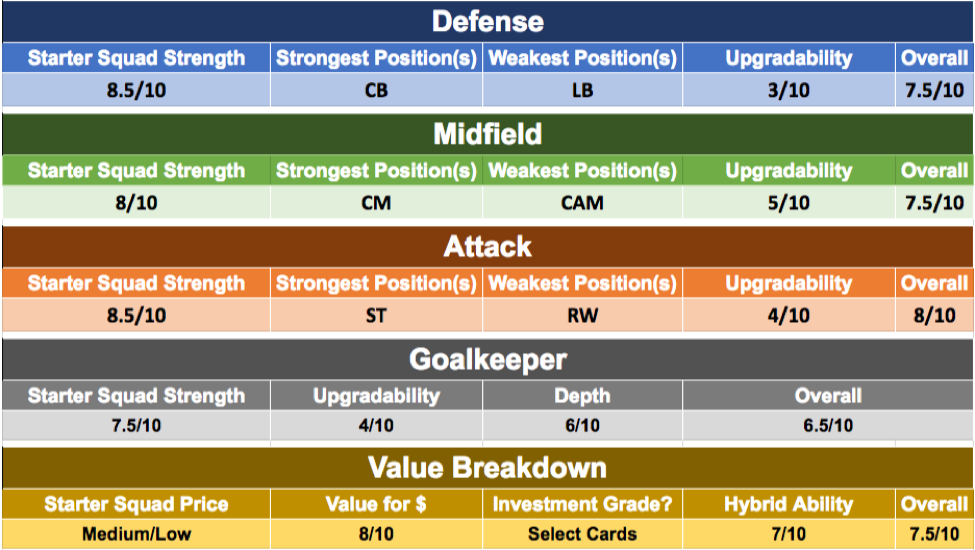 Finally, let’s break things out by nation. You’ll notice that many of the nations have similar ratings to their domestic leagues.

Italian teams are somewhat of a rarity in FUT, but maybe it shouldn't necessarily be that way. Aside from weaknesses in wing back positions and a pinch for depth in creative midfield roles, the starter squad attack is on par with the best of the best. In addition, creative midfield woes can be partially remedied by pushing one of the CMs higher up the pitch. Overall upgradeability is a bit weaker than most would hope for, but there are great options at CM/CDM and the wings. They also boast a great value for coins. 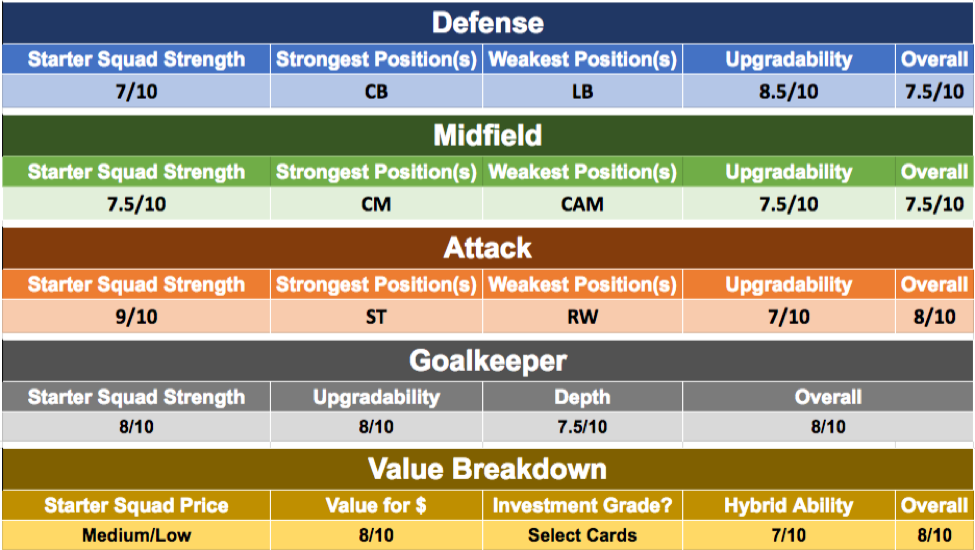 The French were a fixture last year, and this year looks no different. While there are worries about upgradability at wing back, they offer affordable quality on the wings, making them appealing to anyone looking to abuse the new crossing mechanics. A bonus of building a French team is that because of the popularity of nation, many cards can serve as potential Squad Buildling Challenges investments. 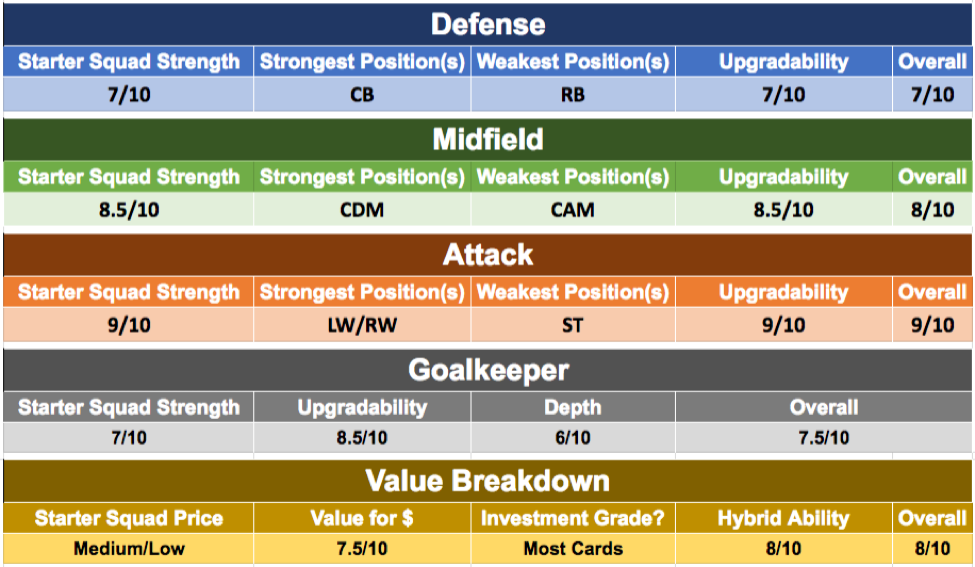 Brazil has always been a popular starter team nation. While the glory days of skiling to glory may have passed, that doesn't mean the Brazilians can't put together a decent budget squad. Despite weaknesses at CB and ST, there is plenty of pace and flair to go around (as one would expect). While it will be possible to pick up some bargains, we caution that a combo of popularity and a lack of high quality depth could push prices up. 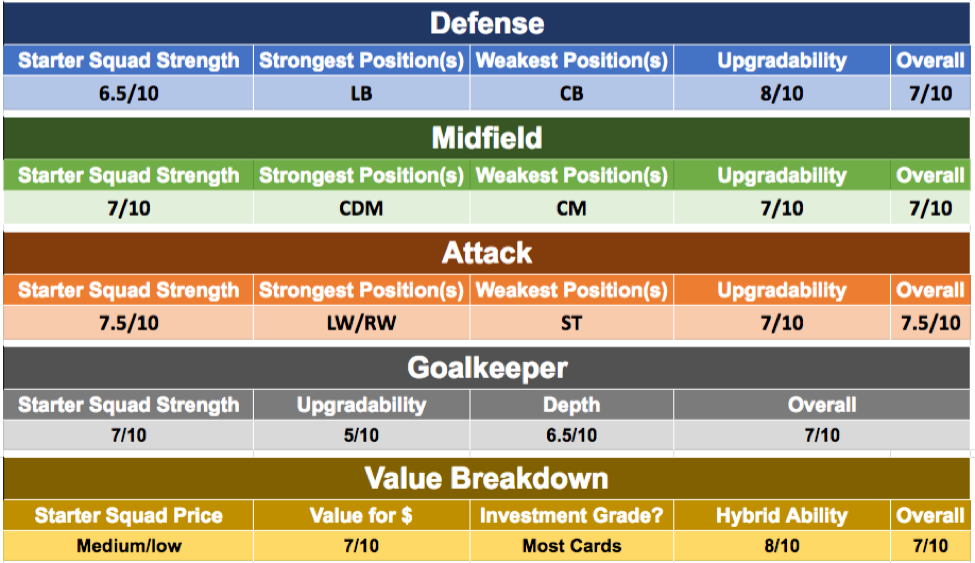 To be blunt, we don't recommend building an English team. You are essentially building a Premier League team with fewer options. While it is true that you can reach into the lower leagues of the Championship, because of the popularity of the nation and the Premier League, value for coins will be low. In addition, they are curiously lacking in select attacking positions (i.e. LW/LM). 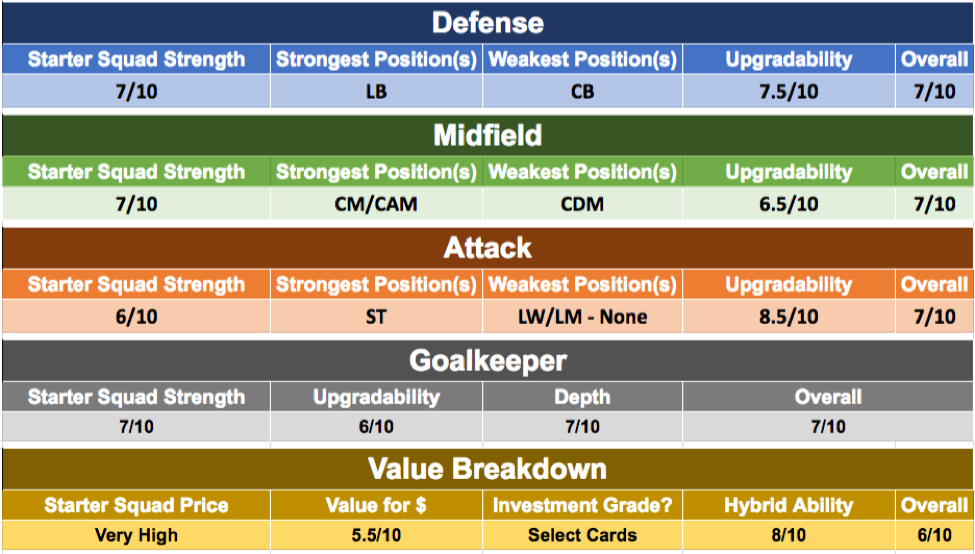 Belgium seems to be a FUT fan favorite at the moment. They have the upper-tier to compete with the best, and a solid starter tier lineup. Their attack and midfield provide a solid foundation, but select positions lack the depth required to bring them into the elite category. Do not write this nation off though, especially considering its upgradability. 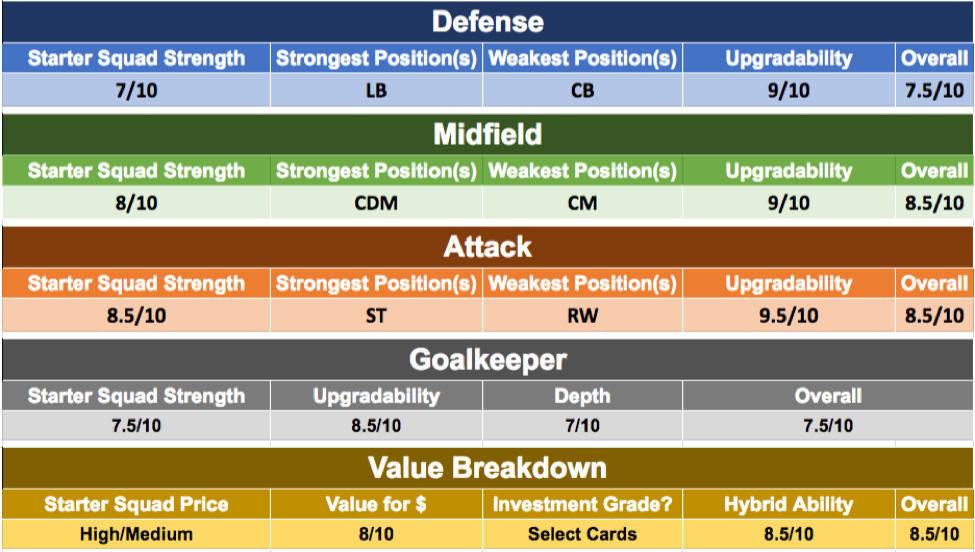