FIFA 18 Patch 7 Title Update Notes: Everything you need to know

Published on by lukezim 19 Comments Updated on 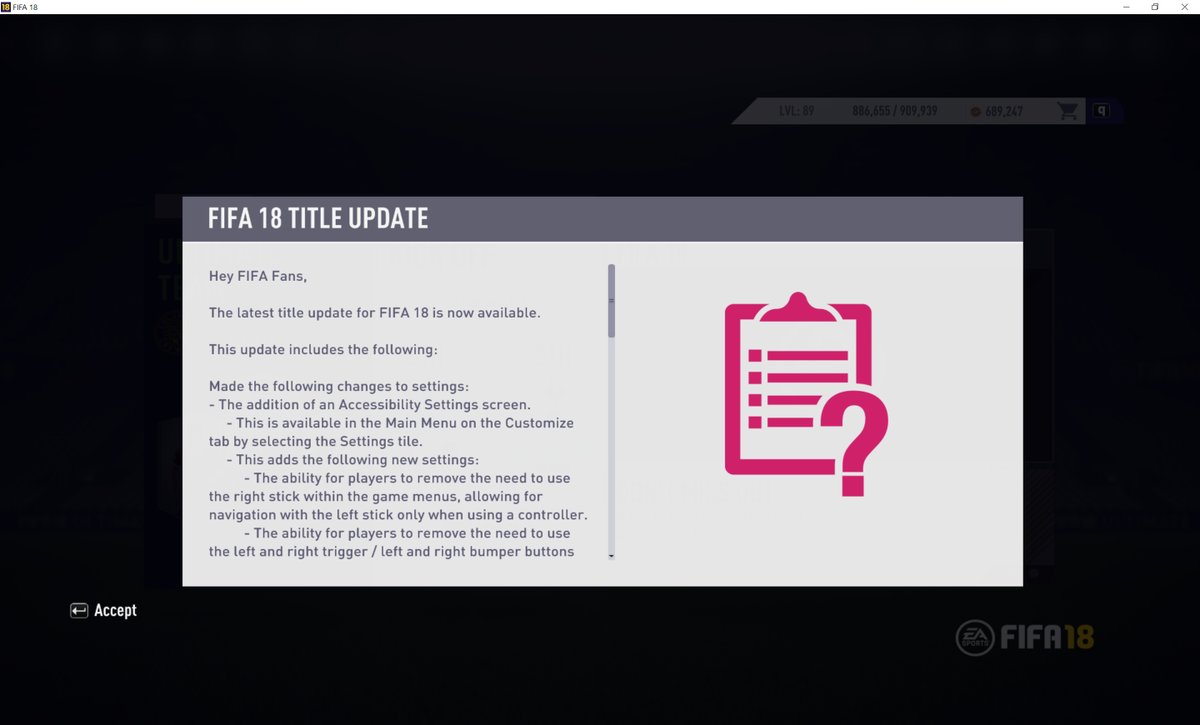 FIFA 18's seventh major title update is here for PC and expected soon for Xbox One and PS4. Let's start as we do with just about all of these lately before we go any further:

Just because something you want changed wasn't in this particular release doesn't mean EA isn't aware of it or that it necessarily will never be addressed. FIFA's current iterative release cycle means the majority of changes deployed are done so in the order they are finalized and finished. Rest assured there will be more changes and more patches to come over the life of the game.

That said, let's talk about what's different in this latest release. Gameplay seems completely unchanged and the focuses by and large are on presentation/polish/navigation, and perhaps most importantly, accessibility.

One of the biggest focuses this go around is a new Accessibility Settings screen, a way to help FIFA reach and be accessible by more gamers than ever before. People with disabilities and the non-disabled alike should have every ability to enjoy their football. While there's certainly still a long way to go, EA's points of emphasis on these fronts in the FIFA and Madden franches are frankly overdue and very welcome.

The FIFA team also mentions in the release notes a resolution to an issue where in which navigating "Pressing the D-pad, when using a controller, would occasionally not register." Some are interpreting this to mean a resolution to all menu lag, which may be a bit naive if not premature. PC menus already navigated far smoother than its console counterparts, and that language could simply refer to a specific situation where input lag was taking place, not necessarily a broader improvement to all menu navigational lag. We'll have to wait and see what PC players say about this specific change.

From a presentation stand point, the release notes adds "Updates to the 2D portraits for 970 players" as well as "Added 2d portraits for 342 players that previously had a silhouette." Clearly not game-changing, but a nice touch for those hoping to keep the in-game experience fresh after nearly five months of the game being out.

Title Update 7 surely isn't going to win hearts and minds amongst the more cynical social media crowds, but the (admittedly minor) tweaks by and large seem welcome. You can see the complete release notes below:

The latest title update for FIFA 18 is now available on PC.

This update includes the following:

Addressed the following issues in all screens:
- Pressing the D-pad, when using a controller, would occasionally not register.

Made the following changes in FIFA Ultimate team:
- In FUT Champions Weekend League, on the Match Preview screen, you will no longer see the status of your opponent update between "Making Changes" and "Ready", it will always display as "Making Changes".
-- There is a known issue with this change that sometimes results in the status for your opponent showing as blank, it will be addressed in a future update.
- Selecting the difficulty of a match in FUT Squad Battles will no longer cause the player's default match difficulty setting outside of FUT Squad Battles to be changed.
- In the preview panel for a FUT Champions Channel replay, the match records displayed for the participating players will now reflect their record when that match took place instead of their current record.

Addressed the following issues in FIFA Ultimate team:
- German and Polish text overlapping the button icons on the controls panel in FUT Champions Channel. - Player Contracts and Manager Contracts were incorrectly capitalized in the search filter options of the FUT Transfer Market.

Made the following changes in Audio / Visual / Presentation:
- Updates to the 2D portraits for 970 players.
- Added 2d portraits for 342 players that previously had a silhouette.

Addressed the following issues in Audio / Visual / Presentation:
- Post goal commentary saying that a defender deflected the ball on goal, when it was actually the keeper that touched the ball before it went into the net, when using Arabic, German, Dutch, Spanish, French, Italian, Mexican Spanish, Polish, Russian or Japanese commentary.

Thanks to those who’ve provided feedback. Throughout the course of the FIFA 18 season we'll provide you with more information and updates if and when they become available.