Published on by smooks 31 Comments Updated on 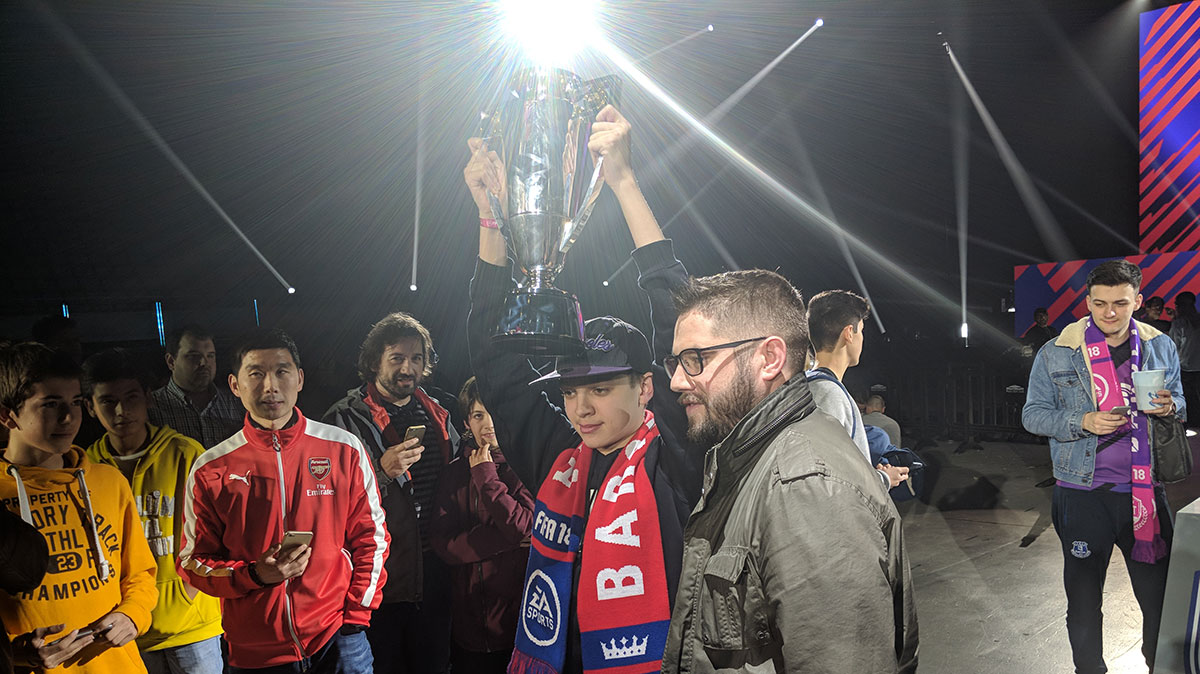 Xbox One champion Donovan 'DhTekKz' Hunt, just 16 years old, beat his PlayStation 4 counterpart Gonzalo Nicolas 'nicolas99fc' Villalba by an aggregate scoreline of 9-3 to win the Barcelona FUT Champions Cup Sunday. He'll take home 22,000 dollars and lay claim to being one of the top FIFA Ultimate Team players in the world.

"It doesn't feel like anything, cause it hasn't sunk in; I don't know what I've done. I'll wake up tomorrow and it'll be a different world for me," DhTekKz said immediately after winning his championship.

After an astonishing run to the final, Hunt took a commanding two-goal lead in the first leg of the Grand Final within minutes. With a low, driven shot from right-hand side of goal, Hunt extended his lead to three through his Icon Thierry Henry right on the stroke of halftime. Villalba pushed for a comeback a few times, but as he's done throughout the tournament, Hunt's Team of the Year David De Gea came up with some massive saves to keep his clean sheet.

Villalba finally got on the board in the 81st minute, with a glancing header from Cristiano Ronaldo. He followed it up with another quick tally to make it 3-2, but his first leg comeback ended there. The second leg started shockingly similar to the first, with DhTekKz taking yet another 2-0 lead within the first few minutes, restoring his three-goal cushion.

Viewers soon began to get a case of déjà vu, as another Ronaldo header snuck in past Villalba's Icon Lev Yashin. One more goal later, Hunt was sitting pretty at a 7-2 aggregate margin, but he kept his foot on the gas. A long-range shot made it a commanding 5-0 second-leg lead at halftime. The final aggregate scoreline was 9-3, but the result had long been decided.

Hunt, a college student at a very young age, rose to somewhat of a celebrity status over the course of today. The British teenager's name started trending on Twitter in the U.K. and Ireland, and he was even featured in a Twitter Moment, as he blazed through the Xbox One Knockout Stage en route to the cross-console Grand Final. His amazing run saw him beat Kurt Fenech, Hashtag United's 'Hashtag Ryan' Pessoa, and Michael 'VfL MegaBit' Bittner, the Xbox One No. 1 seed from the Group Stage.

Conversely, Villalba flew entirely under the radar before making the Grand Final. The Argentine, who demolished FC Basel's Tim 'TheStrxngeR' Katnawatos, 6-3, in the Playstation Final, placed in the top seven at last year's FIFA Interactive World Cup. His marquee win on the way to the Grand Final was over Kai 'Deto' Wollin, the 2017 FIWC runners-up, who he beat by a modest 3-1 margin.

The final day began with more major upsets in the first round of the Knockout Stage alone. Schalke's Tim 'S04 Tim Latka' Schwartmann and Hashtag United's 'Hashtag Harry' Hesketh, both big names coming into the tournament, bowed out just moments in. On the other side, Wolfsburg's Timo 'iTimoX' Siep and Benedikt 'SaLz0r' Saltzer, who went undefeated in the Group Stage, RB Leipzig's Cihan Yasarlar, and Shaun 'xShellzz' Springette, the 2017 FIFA Ultimate Team Series runners-up, all exited in the Round of 32 as well.

Lukas 'Sakul' Vanderheide, the other competitor to finish the Group Stage with a 7-0 record, went on to win his first two elimination matchups before conceding to VfL MegaBit. Fenech, who was the first to qualify for the knockouts yesterday, scored nine to win his first matchup but only managed one in his second round loss to DhTekKz.

Reigning FIWC Champion Spencer 'Unilad Gorilla' Ealing advanced through to the quarter-finals before losing to Niklas 'NRaseck 7' Raseck. Gorilla's Round of 16 match against former Hashtag United man Tassal 'FaZe Tass' Rushan, which finished 11-8 to the former, was the most high-octane affair to watch. Tass edged Gorilla 5-4 in the first leg but a huge seven-goal effort in the second leg ensured the win for the 2017 Champion.

The tournament faced some more technical difficulties Sunday, as the PlayStation Network went down in the middle of the proceedings at arguably the most inopportune time. The rest of the games, after the console quarter-finals, were forced to be played on Xbox instead. The unfortunate situation was forced in all likelihood due to pre-existing broadcast arrangements and the lease on the facilities, plus travel logistics for the players tomorrow.

Manging his way through the extensive delays only fortified the impressivenes of DhTekKz's Sunday. The Grand Final started an hour later than it was supposed to be finishing originally, and TekKz had to cope with an extensive unplanned wait after his console final.

"I just kept walking everywhere to try and get it out of my mind -- and spoke to a few people," he said about how he tried to cope with the unplanned recess. "My phone lost charge. It's a good thing it did. I didn't want to look at all the messages I was getting."

But he did have some overwhelming moments in the build up that made him realize the magnitude of what was at hand as well.

"Some guy, he played a voice message for me -- It was Thibaut Courtois wishing me good luck. It was amazing," he added, completely in awe of his journey.

The quarter-finalists on each console, i.e. the top eight from Xbox and Playstation, qualified for the Global Series playoff legs that will come later this year in June. The notable names among the qualifiers include Gorilla, Hashtag Ryan, Deto, Sakul, and Vfl Megabit. Of course, those who did not advance will get another chance, by finishing atop the February Weekend League leaderboards and qualifying for the next FUT Champions Cup.

The FIFA 18 Global Series will continue with the next FUT Champions Cup, which is scheduled to be held in April. Qualifying begins this coming weekend and takes place for the entirety of February.